Are McDonald's Restaurants Flipping Their Iconic Golden Arches Upside Down for Women's Day?

The fast food chain is celebrating International Women's Day by turning its iconic golden arches into a "W." 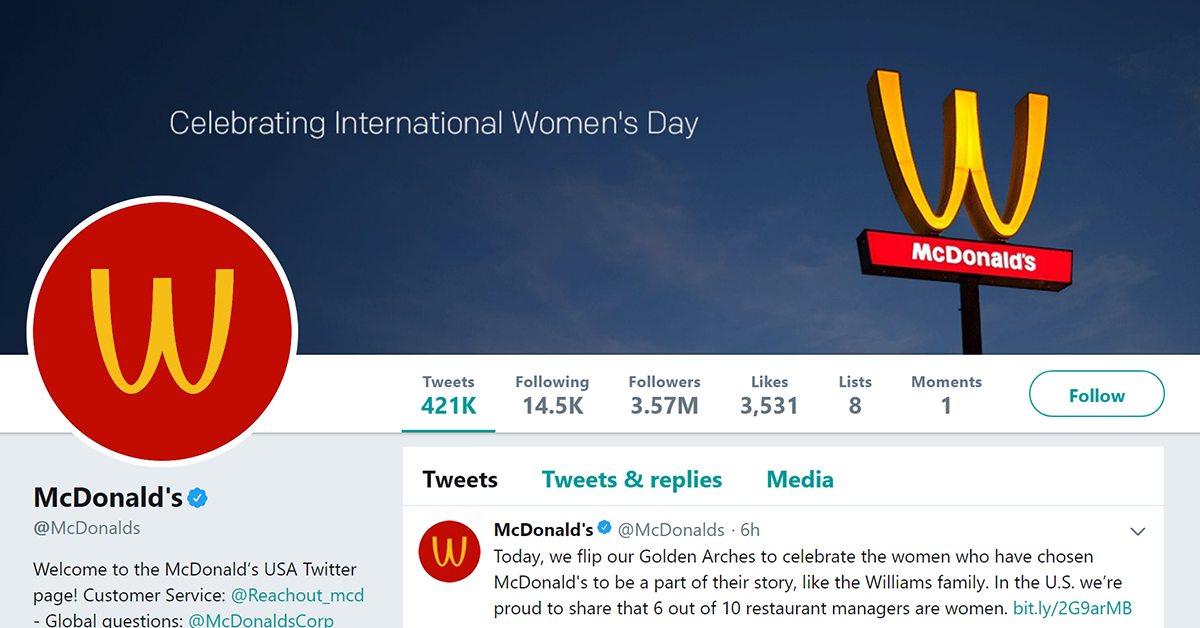 McDonald's flipped its iconic "M" to form a "W" for International Women's Day on social media, and at least one franchise in Lynwood, California turned over their sign for a day to do the same.

Not every location is changing their physical sign; in fact, we have only seen evidence of one.

On 8 March 2018, the fast food chain McDonald's participated in celebrating International Women's Day by flipping images of its iconic golden arches upside down, so that instead of forming an "M," it forms a "W":

In the U.S. we’re proud to share that 6 out of 10 @mcdonalds restaurant managers are women. Join us in recognizing the extraordinary contribution of women at McDonald's on #IWD2018: https://t.co/h9hdnOgLqw pic.twitter.com/Ttx6N6zCKV

Images of the inverted signage spread on social media, prompting some readers to ask whether they were real. McDonald's corporate officials have announced that the chain is indeed flipping its iconic "M" to honor women:

Today we are flipping our iconic @McDonalds logo in honour of women everywhere. #IWD2018 https://t.co/lindNmiyeS https://t.co/qfLQAGc3pD

We sent an e-mail asking how many McDonald's franchises would be participating and got no response. However, we can confirm that at least one restaurant in Lynwood, California, and owned by franchisee Patricia Williams has flipped the physical logo. The Los Angeles ABC affiliate KABC took aerial footage of the upturned sign: