Fake news sites utilized an old urban legend for a story linking an outbreak of parasitic worms to the use of "worm filler" in McDonald's hamburger meat. 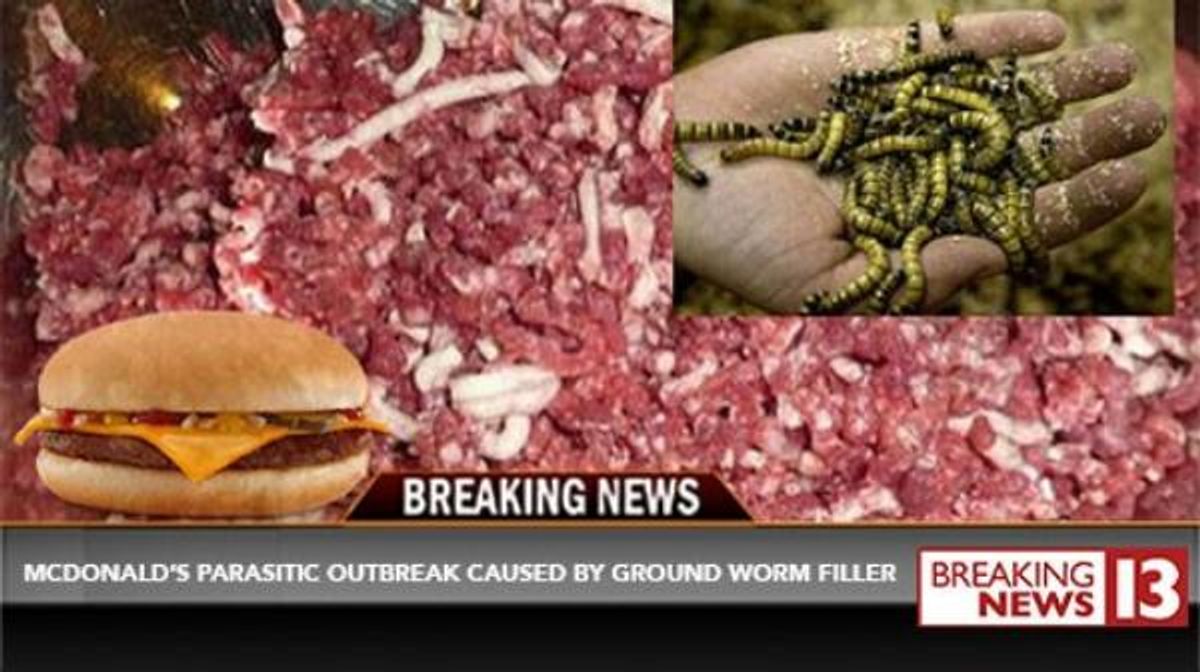 Claim:
The CDC linked a parasitic worm outbreak to the use of "worm filler" in McDonald's beef patties.
Rating:

On 12 January 2016 multiple fake news sites published articles reporting that the Centers for Disease Control (CDC) had linked an outbreak of "parasitic roundworm disease" to the use of "worm filler" in McDonald's beef patties. A version published on the fake news web site breaking13news (and republished by ILyke.co a few days later) was titled "CDC: McDonald's Parasitic Worm Outbreak Linked Back to Ground 'Worm Filler' In Patties" and opened thusly:

The Center for Disease Control and Prevention announced Monday that it is looking into 183 more cases of parasitic roundworm disease linked to the McDonald’s restaurant chain. This is in addition to the 5 original cases that happened in Chicago in late December. However, the parasites that caused these new illnesses appears to be a bit different from the DNA fingerprint that involved the smaller outbreak last month.

According to the CDC, this new case is a result of the filler used in McDonald's so-called "all beef patties." Testing revealed the beef patties contain 23% ground worm filler. Further investigation showed purchases made from Roger Lee's Worm Farm by the fast food giant as far back as 2008.

These reports played on an old (and false) urban legend dating back to the 1970s and claiming that McDonald's has used worm meat in their hamburgers at times, ostensibly to increase profits by substituting cheaper worm filler for more expensive real beef. Even as pure folklore, that legend didn't hold up from a logical scrutiny:

As McDonald's CEO Ray Kroc noted at the time, the rumor didn't even make sense from a financial standpoint: Rather than saving the company money, the idea of using of worm meat as a "cheap filler" was nonsensical because worms were much more expensive than beef:

Ray Kroc, who bought McDonald's from Mac and Dick McDonald in 1955, added his own assurances: "We couldn't afford to grind worms into our meat," he countered. "Hamburger costs a dollar and a half a pound, and night crawlers six dollars."

Needless to say, no such finding was made by the CDC in January 2016 (or at any other time). Breaking13news is one of several fly-by-night "satire" news sites that publishes clickbait fake news stories with no actual satirical bent to them. Like many of its ilk, the site bears no disclaimer informing readers its articles are entirely fabricated.

The site similarly snared social media users in November 2015 with a false report that 53 people had been killed in a Halloween "hatchet massacre" aboard the Queen Mary.