Two incidents at one McDonald's were spun into a claim that the chain has implemented a new policy barring customers from buying food for the homeless. 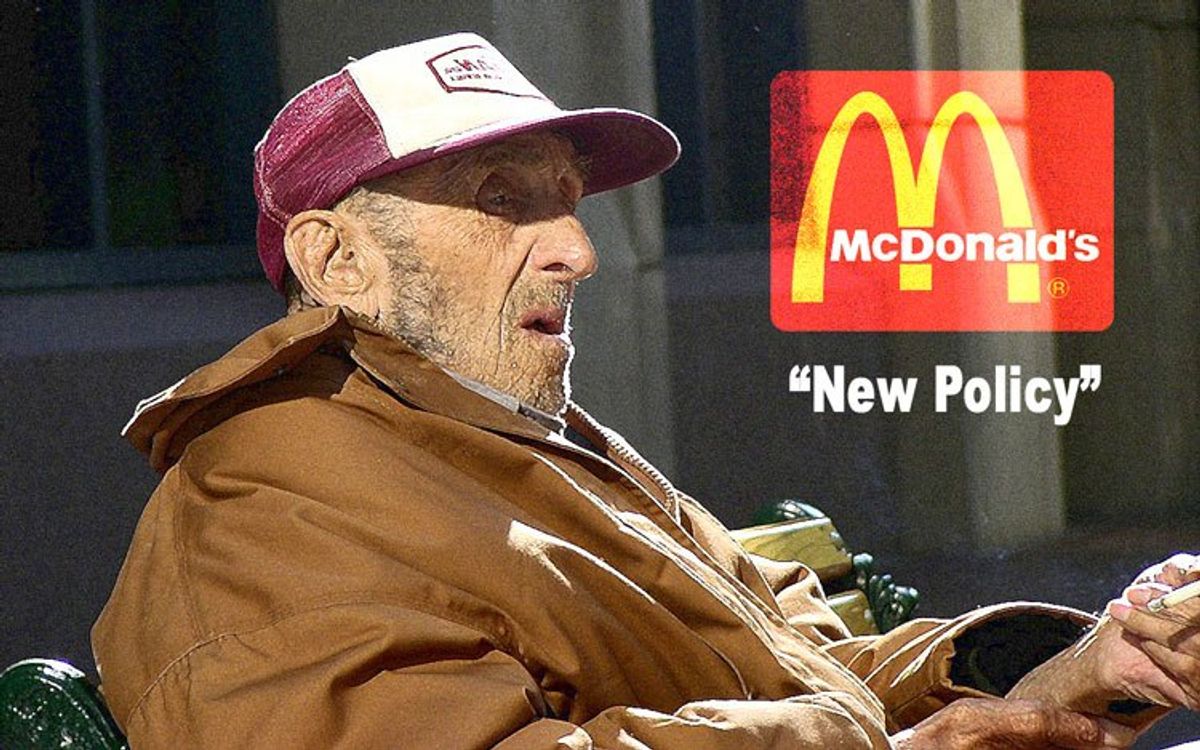 Claim:
The McDonald's fast food chain has implemented a policy barring their customers from buying food for homeless people.
Rating:

On 21 May 2015, the True Activist web site published an article misleadingly headlined "McDonald's 'New Policy' Bans Customers from Buying Food for Homeless," which opened with an equally misleading paragraph asserting that the McDonald's hamburger chain had implemented a new policy barring customers from purchasing food for homeless people:

A number of stories have recently come to light, showing that McDonalds allegedly has a new policy which is preventing customers from buying food for homeless people. In the UK this month alone there have been two separate incidents to make international headlines, where homeless people were denied service at McDonalds.

As suggested by the second sentence of that paragraph, the headline and claim about McDonald's having put in place a new policy prohibiting the purchase of food for the homeless at that chain's restaurants were based on a mere two incidents that took place within a week or so of each other at the same UK McDonald's restaurant (out of more than 36,000 McDonald's outlets worldwide). Both accounts drew only local media coverage, not "international headlines," and only one of the two incidents involved a customer's attempt to purchase food for a homeless person (the other was about a paying customer's ordering a meal for himself). Finally, McDonald's corporate quickly clarified that both cases comprised errors committed by the local management of a single McDonald's and were not reflective of any chain-wide policy (new or otherwise) regarding the homeless. The first incident, reported by the Manchester Evening News on 8 May 2015, concerned a gardener in work clothes who was initially denied service at a McDonald's restaurant in Oxford Road because workers there mistakenly assumed from his scruffy appearance that he was homeless:

A landscape gardener claims he was refused a meal at McDonald's because he 'looked like a homeless person.'

Daniel Jackson, 27, was wearing outdoor work clothes when he was initially denied service at the fast food restaurant in Oxford Road.

He said: "I'd just clocked off work and I was absolutely ravenous. I'd not eaten since breakfast so I thought I'd go to McDonald's for a quick meal.

"But when I got to the till the cashier went to get the manager from the back. He then said he wasn't going to serve me because I looked homeless.

"I explained to him I had been at work all day but he said they had a zero tolerance policy on serving homeless people.

"It took some serious persuasion to convince them I wasn't homeless. I admit I was wearing scruffy clothes because I'd been working outside all day."

Eleven days later, the same newspaper published an account of a similar incident that also involved the Manchester McDonald's restaurant in Oxford Road, one in which a teenager asserted that she had been prevented from purchasing food for an elderly homeless man:

A kind teenager says McDonald’s staff told her they 'do not serve homeless people' as she was trying to buy a meal for an elderly man.

Charlotte Farrow, 19, visited McDonald’s on Oxford Road for breakfast and decided to buy breakfast for an elderly homeless man after spotting him nearby.

But she claims staff at the fast food chain told her they could not serve homeless people as part of a 'new policy'.

However, in both cases the customers in question were in fact served after initial confusion was sorted out, and in both cases McDonald's corporate confirmed that the company had no policy in place barring purchased of food by or for the homeless at their restaurants:

After Daniel [Jackson] persuaded the member of staff he was not homeless, they agreed to let him order a meal to take away.

A McDonald's spokesman said: "We are very sorry for this incident and can confirm that it is not McDonald's policy to refuse to serve homeless people.

A McDonald’s spokesman said they have reviewed CCTV which shows the homeless man was served before Charlotte [Farrow] went in [to purchase more food for him]. They said it also shows both customers later being served at the restaurant but [the] company's policy was 'incorrectly communicated' by staff.

'Both the customer and the gentleman she was buying food for were served. It is not a McDonald's policy to refuse to serve homeless people and all staff have been reminded of this.'

Given that there has been no rash of complaints in the news media (either before or since these two same-source incidents) about McDonald's outlets spurning homeless customers, it's safe to say the evidence backs McDonald's assertion they have no such policy in place.

In fact, McDonald's outlets in East Asia have not only been welcoming the homeless, but also offering them places of refuge (although that benificence is also not an expression of official company policy)

Every night across East Asia, in major cities like Beijing, Hong Kong and Tokyo, an invisible class of people — shut out of shelter systems, scorned by their families, down on their luck — turn to a beacon of Americana for a warm, dry place to sleep.

By day, the McDonald's restaurants host birthday parties and book clubs. By night, when the floors have been mopped a final time and the pop music turned down, they become sanctuaries for the downtrodden, who pounce on half-eaten hamburgers and stale French fries, and stake out prized sleeping spots in padded booths.

Often called McRefugees, they vanish at sunrise, some combing their hair with plastic forks before slinking outside into the masses. While other restaurants might kick them out, McDonald's generally embraces wanderers, who have flocked to the chain as it has rolled out more 24-hour locations in Asia. More than half of the 2,200 McDonald's restaurants in mainland China are now open 24 hours a day.

"McDonald's welcomes everyone to visit our restaurants anytime," said Regina Hui, a spokeswoman for McDonald's in China.

How welcoming is up to each franchise owner, the company says. "We are definitely a welcoming place, but I wouldn't call it a policy," Becca Hary, a spokeswoman at the company's headquarters in Oak Brook, Ill., wrote in an email.

In January 2016 the UK news media humorously reported on a reverse case — a customer avowed she successfully purchased food at a Halifax (West Yorkshire) McDonald's restaurant for man she assumed was homeless, only to discover he was another McDonald's customer who was simply waiting for his order:

A mum-of-two was left 'mortified' when she bought a 'homeless' man gorging on tomato sauce a meal in McDonald's — only to find out it was a hungry customer waiting for his order.

Claire Varin, 33, was in McDonald's in Halifax town centre when she saw an unshaven man with a rucksack sat on a nearby table with no food.

After spotting him eating ketchup directly from the sauce dispenser, Claire feared he was homeless and hungry.

However her 'random act of kindness' backfired after she placed the meal down in front of him — as a member of staff brought over another meal and apologised to him for the wait.

Claire, from Sowerby Bridge, West Yorkshire, said: 'I was mortified. I felt like I was going to die of embarrassment. I wanted a hole to open up underneath me.

'I didn't stick around to see if he ate the food I bought him too, I just ran out of the shop as quickly as I could.

'God knows what he thought. He probably tells people about the time a crazy woman bought him a breakfast for no reason.'

Dobson, Charlotte.   "Landscape Gardener Claims McDonald's Refused to Serve Him Because He 'Looked Like a Homeless Person.'"     Manchester Evening News.   8 May 2015.