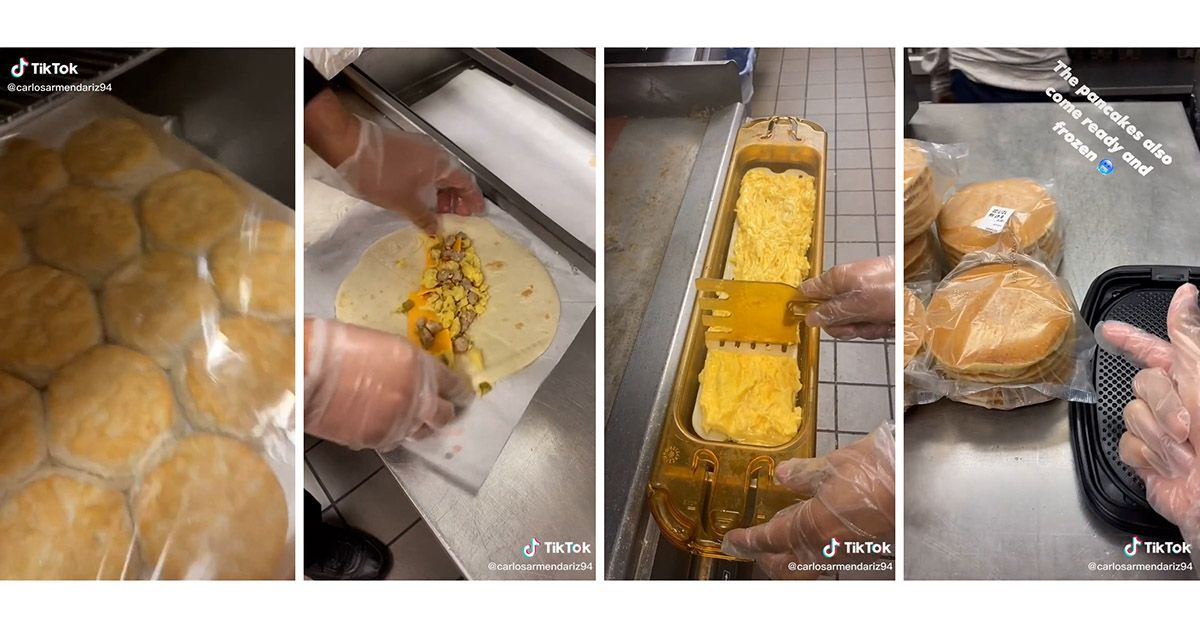 In a 1992 McDonald's TV advertisement, a singer belts out a tune: "McDonald's is really cooking breakfast!" McDonald's breakfast was first introduced in the 1970s, and through the years, it has gone through quite a number of changes. And many rumors have circulated about its ingredients and preparation. For example, we previously reported that its McMuffin menu items were still prepared with freshly cracked eggs. More recently, TikTok videos appeared to "expose" how McDonald's restaurants prepare other breakfast menu items. We looked into the issue to find out.

In early December 2020, TikTok user @carlosarmendariz94 posted two videos that showed how two popular McDonald's breakfast items were prepared. A video purporting to show a Sausage Burrito was posted on Dec. 5, and had racked up nearly 88,000 views:

Three days later, @carlosarmendariz94 uploaded another TikTok video that appeared to display how the Big Breakfast was cooked. It was viewed well over 571,000 times:

It was true that both videos showed popular menu items being prepared in a McDonald's restaurant. The Sausage Burrito and the "Scrambled Egg Sausage And Vegetable Mix" all came in one package.

As for the Big Breakfast, the McDonald's website called the biscuits "warm biscuits," rather than referring to them as fresh or made from scratch. The same went for its Hotcakes. Both appeared to be frozen and heated up in a microwave oven. As for the scrambled eggs, we previously published an exhaustive report on the ways McDonald's cooks eggs on a per-menu-item basis. Breakfast sausage is absent from the Big Breakfast video, as @carlosarmendariz94 noted in the description.

If the videos were intended to reveal some negative aspect of McDonald's food, some viewers were not impressed.

A top-rated comment from Sarah Jones on the Big Breakfast TikTok video said: "It's fast food for a reason. Y'all want fresh, homemade food in 3 mins." Another from Kimberly Martinez read: "People really think y'all sit back there and knead dough for biscuits and have fresh batter for pancakes... McDonald's ain't for y'all then." And @anubisdark also chimed in, saying: "Idk why people at fast food try to expose fast food restaurants, bruv! We already know, shit hasn't changed."

The Old Days of McDonald's Breakfast

With that information in mind, it might be time for a brief history lesson. We found a number of comments that said there was once a time when McDonald's restaurants quickly cooked fresh breakfast items. Those comments were from people who claimed to have worked for McDonald's in the past.

TikTok user @lamandis commented: “I feel old. I remember working in McDonald’s when we would go in at 5:00 a.m. to actually make the biscuits.” User @d4sc33 added: "I used to work for McDonald's in the 1990s. We used to hand-make everything with the exception of the biscuits." Rachel Marie Slade also commented: "I'm so old. When I worked at McDonald's, we made the biscuits from scratch in 1985."

It was true that there was a time McDonald's breakfast biscuits were made from scratch:

It was also true that McDonald's once advertised freshly made Hotcakes:

We were unable to confirm whether or not any McDonald's restaurants still made biscuits or Hotcakes from scratch. However, we observed several commenters who hinted this may be the case. User @clara.martin16 commented: "I worked at McDonald's for 4 years and our biscuits were made from scratch every AM. I live in a small town so the could be the difference." Meanwhile, @sammyqueens0 also said: "Not all McDonald's biscuits are frozen. At the one I work at we make biscuits from scratch." Felix Santiago replied: "They still do, but certain stores choose frozen because they are unable to keep a biscuit maker."

Not only did McDonald's once make more of its breakfast menu items from scratch, but the franchise also featured a special lineup of characters for the McDonald's Hotcakes: the Rockin' Hot Cakes — a trio of singing and dancing pancakes:

For further reading, we also previously looked at TikTok videos that purportedly showed a McRib being prepared.