Did McConnell Say 'No Question' Jackson Qualified, Then Say He Won't Support Appointment? 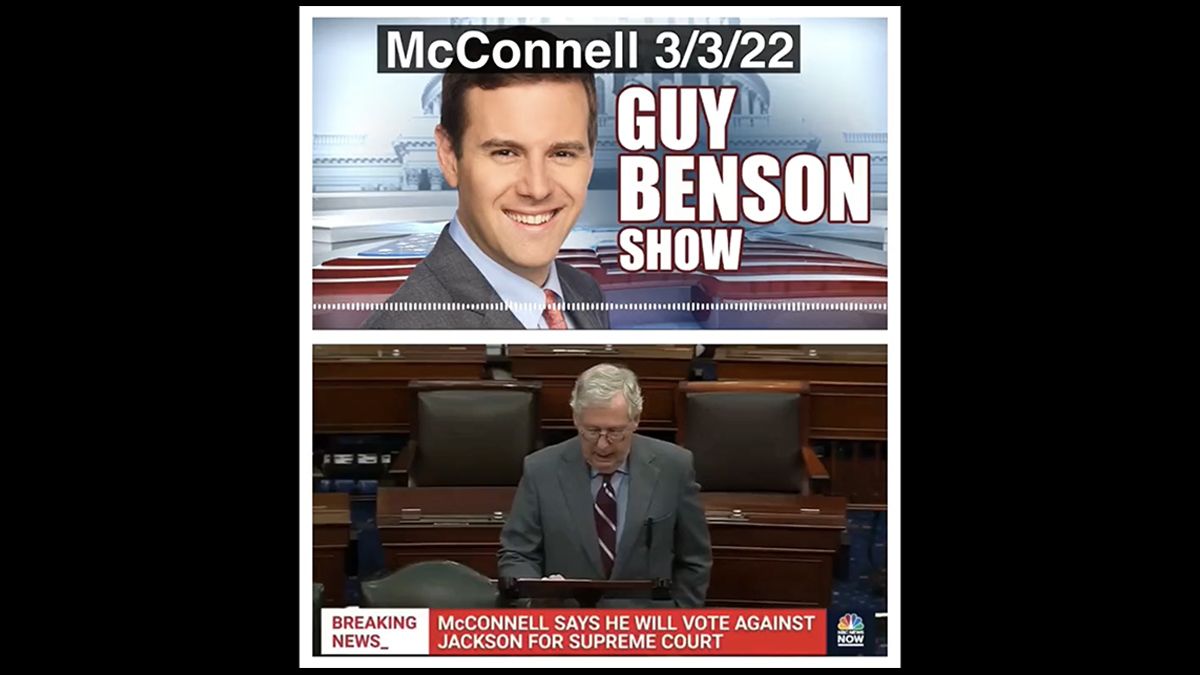 Claim:
Mitch McConnell said there is "no question" Ketanji Brown Jackson is qualified to be a justice of the U.S. Supreme Court, then said he will not support her appointment.
Rating:

It's true that U.S. Senate Minority Leader Mitch McConnell said there is "no question" that Ketanji Brown Jackson is qualified. He made that remark on March 2, 2022, during an interview in which he also expressed concern over Jackson's opinion on court-packing. More than three weeks later, after her confirmation hearing, McConnell announced that he "cannot and will not" support Jackson's appointment, once again citing dissatisfaction with her answers on the court-packing issue, among other reasons.

It's true that U.S. Senate Minority Leader Mitch McConnell said there was "no question" U.S. Supreme Court nominee Ketanji Brown Jackson was qualified for the role, then later said he will not support her appointment.

This claim involving McConnell and Jackson was included in a video that was posted to both Twitter and TikTok on March 25, 2022:

McConnell made the "no question" remark about Jackson on March 2 during an interview on "The Guy Benson Show" on Fox News Radio. When asked by Benson if Jackson is qualified for the U.S. Supreme Court, McConnell answered: "Yes, yes. No question about that."

BENSON: Earlier today you had an opportunity to meet face-to-face with the new Supreme Court nominee from President Biden, Judge Brown Jackson of the D.C. Circuit, a highly anticipated meeting because of your position, of course, in the Senate, and it’s always all eyes on a Supreme Court vacancy. To the extent that you're able to talk to us about your perceptions of the nominee, how that meeting went, we'd be very curious to hear.

MCCONNELL: Well, these nominees don't say much. They’ve all been schooled going back to Ruth Bader Ginsburg not to really answer much of anything. But I think she's an intelligent — very likely a progressive. The Senate Republican Minority intends to treat the nominee respectfully. I'm not at all interested, for example, in what somebody may have written in her high school yearbook. I did emphasize to her I thought it was one thing she could simply address, and people would welcome hearing, and that's the same thing that Ruth Bader Ginsburg and Stephen Breyer said about court-packing, both of whom made it clear that was a bad idea and was attacked — an attack on the integrity of the — of the — of the court and its independence. I didn't get an answer to that. But I’m sure she would be asked that again in her hearings before the Judiciary Committee.

BENSON: Setting aside her worldview, and I think if she makes it to the court, I think it's likely that she'll be confirmed given the math and the dynamics. I — I'll probably end up disagreeing with much of her jurisprudence and her rulings over the course of her time on the court. But setting that aside, do you think at least in terms of her C.V. is she qualified for the U.S. Supreme Court?

MCCONNELL: Yes, yes. No question about that.

Jackson on Packing the Court

In the same interview, McConnell mentioned his concern over the issue of court-packing prior to his "no question" remark. During her hearing on March 22, Jackson was again asked about court-packing. ABC News tweeted the following video, in which she said, in part, "judges should not be speaking to political issues."

Rutgers Today published a full article about "court-packing," saying that it was something that would be done for partisan reasons.

"People often use 'court packing' to describe changes to the size of the Supreme Court, but it's better understood as any effort to manipulate the Court's membership for partisan ends," Rutgers Today published. "A political party that's engaged in court packing will usually violate norms that govern who is appointed (e.g., only appoint jurists who respect precedent) and how the appointment process works (e.g., no appointments during a presidential election)."

The issue of court-packing became a hot topic during the 2020 nomination and confirmation of Associate Justice Amy Coney Barrett.

On March 24, after the completion of Jackson's hearing, McConnell said: "I cannot and will not support Judge Jackson for a lifetime appointment to the Supreme Court."

McConnell stated several reasons why he would not support Jackson. "First, Judge Jackson refuses to reject the fringe position that Democrats should try to pack the Supreme Court," he said. This was the same issue he mentioned prior to his "no question" remarks about Jackson's qualifications back on March 2.

The Senate minority leader's second point was about "activist judges."

McConnell's third reason why he decided not to support her involved concerns around how he viewed Jackson's "rhetoric" during her previous time as a judge. He specifically mentioned giving "certain terrible kinds of criminals light sentences that were beneath the sentencing guidelines and beneath the prosecutors' requests."

His full remarks appeared on the official U.S. Senate website.

In sum, yes, McConnell originally did tell a radio host that there was "no question" that Jackson was qualified for the U.S. Supreme Court. It was also true that he later said he cannot and will not support her appointment. In both instances, he specifically referenced concerns over court-packing.