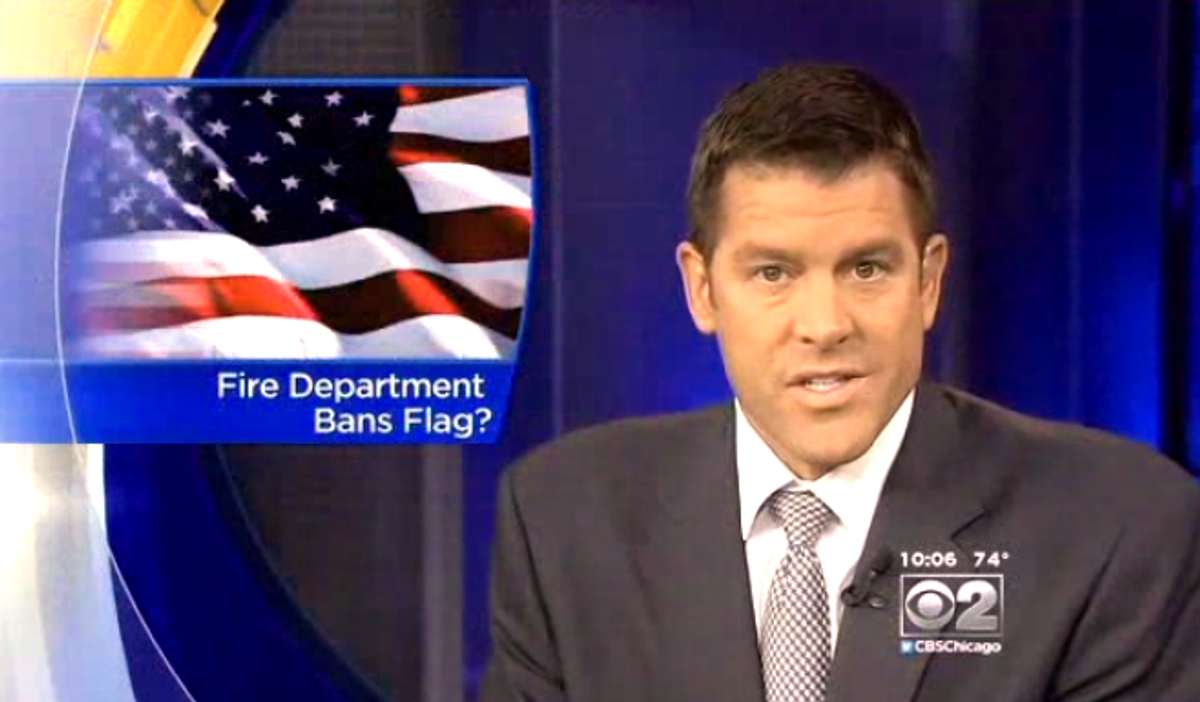 FACT CHECK:   Were four firefighters from Maywood, Illinois sent home from work over the display of an American flag sticker?

Claim:   Four firefighters from Maywood, Illinois were sent home from work over the display of an American flag sticker.

Did 4 Maywood firefighters get laid off for not removing the american flag. In Il

Four Maywood firefighters were sent home from work today for not removing the American flag from their equipment.... https://t.co/vfndVj9s4t

4 Maywood firefighters were sent home from work today 4 not removing the American flag from their equipment pic.twitter.com/yWKcki8VpF

Four Maywood firefighters were sent home from work today for not removing the American flag from their equipment. Like and share to support their fight! While the status update in question shared a photograph of the four firefighters from Maywood, Illinois, it did not include a link to any additional information. Subsequently, a number of readers did not notice that the date of the status update (9 September 2014) indicated it was published nearly a year prior to its social media recirculation.

There was no obvious reason for renewed interest in the story; an article published on 9 September 2014 reported on the initial claims by the Maywood firefighters:

The four firefighters said they were told that the order was issued because of racial discord on the department. The four, who include two white firefighters, a black firefighter, and a fourth firefighter who is a Cuban émigré, said no such problems exist.

Instead, they trace it back to a decision by several firefighters to replace a tattered American flag last month in one of Maywood’s firehouses. The new flag mysteriously disappeared early Aug. 23. The order on decals was issued last week.

The status update linked above was initially posted on the same date as that article. But on 11 September 2014, the Chicago Tribune published a followup on the controversy titled "Maywood fire chief: Patriotic sticker controversy blown out of proportion." In it, Maywood Fire Department Chief Craig Bronaugh Jr. explained that the firefighters had not been docked pay and were permitted to return shortly after the initial dispute:

“After review, I made a decision to put a department-issued flag on every locker,” Bronaugh said at a news conference outside department headquarters. “I want everyone to be clear: There was never an issue of disposing of the flag.”

The four firefighters were relieved of their duties for the shift they were working on and were not docked any pay, he said.

Bronaugh said Wednesday that his order was prompted by renovation plans at the department's facilities and by the desire to have a uniform appearance among his employees.

The Tribune cited a separate, earlier report in which Bronaugh stated "he was trying to address racism within the department" due to "a picture of a monkey smoking a cigarette that had been taped to a locker":

“To see these pictures, and to draw the conclusion that there are racist firefighters working in this firehouse, (it is) something that as the fire chief here, I cannot afford nor tolerate,” Bronaugh said in the WGN report.

Bronaugh refused to answer questions about the picture Wednesday, even though members of his department said it was posted briefly about a decade ago and had nothing to do with race.

Former Maywood firefighter Michael Hess said he put the picture on the locker of Lt. David Hughes. Both Hess and Hughes are white. Hess said he did it to needle Hughes about his smoking habit.

“I saw the picture in the newspaper, cut it out and put it on his locker about 10 years ago,” Hess said. “It came down as quickly as it went up.”

So while it was briefly true in September 2014 that four Maywood firefighters were sent home from work over an American flag sticker, they were quickly allowed to return and not sanctioned via their paychecks. Moreover, the dispute pertained not specifically to the American flag, but to unapproved imagery on lockers (due to a questionable photograph involving a monkey smoking a cigarette).