Did Maxine Waters Urge Protesters To 'Get More Confrontational'?

Rep. Waters answered questions from reporters while marching with protesters ahead of a verdict in the trial of the former police officer accused of killing George Floyd. 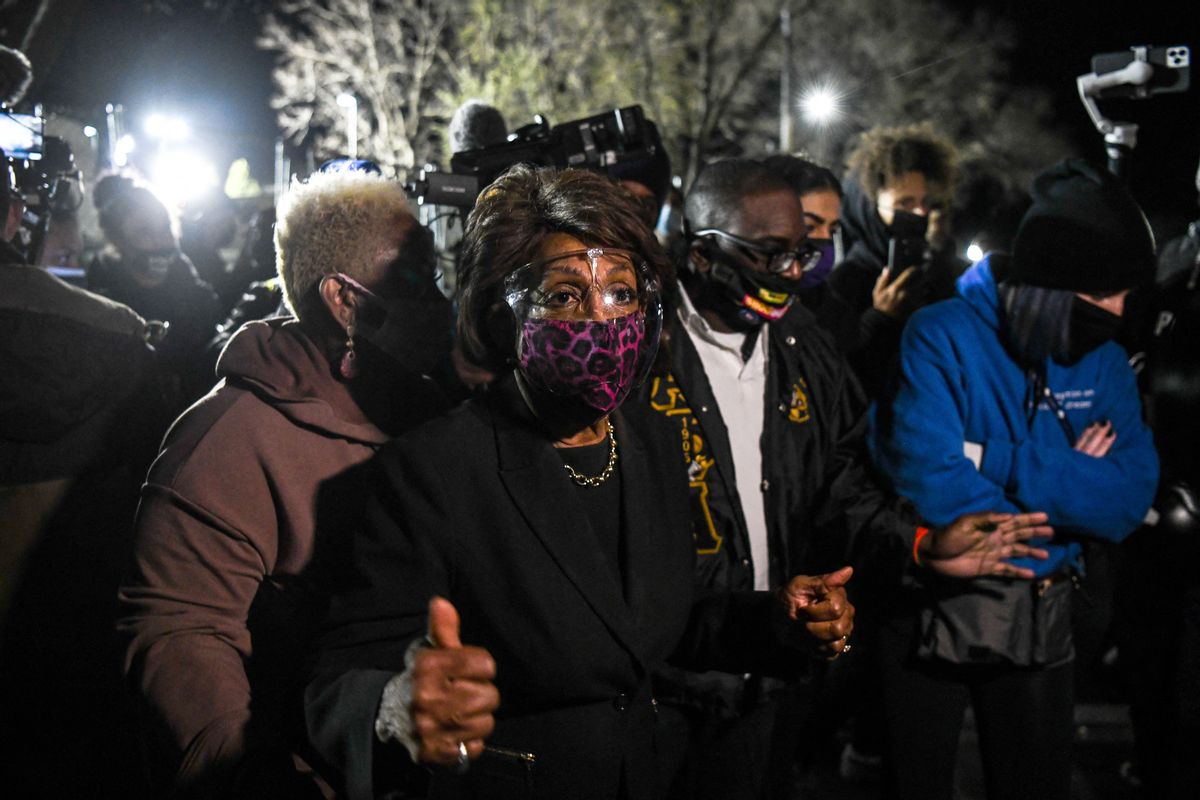 Claim:
Rep. Maxine Waters urged racial justice protesters to "stay in the street," "fight for justice," and "get more confrontational" in the event that Derek Chauvin, the former Minneapolis police officer charged with killing George Floyd, was not found guilty of murder.
Rating:

Responding to partisan criticism over the remarks, Waters described herself as nonviolent and said she was referring to confronting problems in policing and the justice system by "speaking up" and pushing for legislation.

On April 17, 2021, U.S. Rep. Maxine Waters visited a racial justice protest in Brooklyn Center, a suburb of Minneapolis. Answering questions from reporters, the California Democrat said that if Derek Chauvin was not found guilty of murder, protesters would have to "stay in the street," "fight for justice," and "get more confrontational."

Chauvin is on trial for the murder of George Floyd. Floyd died on May 25, 2020, after he was arrested by police on suspicion of passing a counterfeit $20 bill. Video showed Chauvin, then a Minneapolis police officer, pressing his knee on Floyd's neck for over nine minutes.

Waters' attendance at the protest on that Saturday evening came just two days before jury deliberations began in the trial.

In the video, Waters answered a series of questions. She said that she hoped Chauvin was found guilty of first-degree murder. She also said that protesters would need to "stay in the streets" and "get more confrontational" in their "fight for justice," should Chauvin walk free.

The transcript below begins at the 0:21 mark in the Twitter video:

Question: "As a Black man, despite all of the efforts, I feel like nothing changes. And George Floyd is waking so many people up, yet nothing has happened despite the rhetoric. What needs to happen that's different this year than all the years before?"

Waters: "We're looking for a guilty verdict. We're looking for a guilty verdict and we're looking to see if all of the talk that took place and has been taking place after they saw what happened to George Floyd, if nothing does not happen, then we know that we've got to not only stay in the street, but we've got to fight for justice. But I am very hopeful, and I hope that we're going to get a verdict that will say guilty, guilty, guilty. And if we don't, we cannot go away."

Question: "And not just manslaughter, right?"

Waters: "Oh no, not manslaughter. No, no, no, this is guilty for murder. I don't know whether it's in the first degree but as far as I'm concerned it's first-degree murder."

Question: "Ms. Congresswoman. What happens if we do not get what you just told? What should the people do? What should protesters on the street do?"

Question: "What should protesters do?"

CNN referred to the remarks as "controversial." Fox News said that Waters "appeared to incite protesters in Brooklyn Center, Minnesota."

Fox News also reported that video from FOX 9 in Minneapolis showed Waters also urging protesters to take their voice to the ballot box:

As reporters gathered around her, Waters said the protesters ultimately needed to show up at the polls for candidates who align with their views.

On April 19, Judge Peter Cahill, who is presiding over Chauvin's trial, commented about what Waters said. NBC News reported that Cahill denied a motion by Chauvin's defense attorney for a mistrial on the grounds of Waters' remarks, but that Cahill called Waters' words "abhorrent."

"I'll give you that Congresswoman Waters may have given you something on appeal that may result in this whole trial being overturned," the judge said.

In sum, it was true that Waters told protesters that, should Chauvin not be found guilty of murder, they should "stay in the street," "fight for justice," and "get more confrontational," though she later said she was not speaking of engaging in violent actions.