Did Matt Walsh Tweet Support of an Elephant Fetus?

There's no shortage of fake tweet screenshots that fly around on the internet, so we looked to Google cache to see if this one was real. 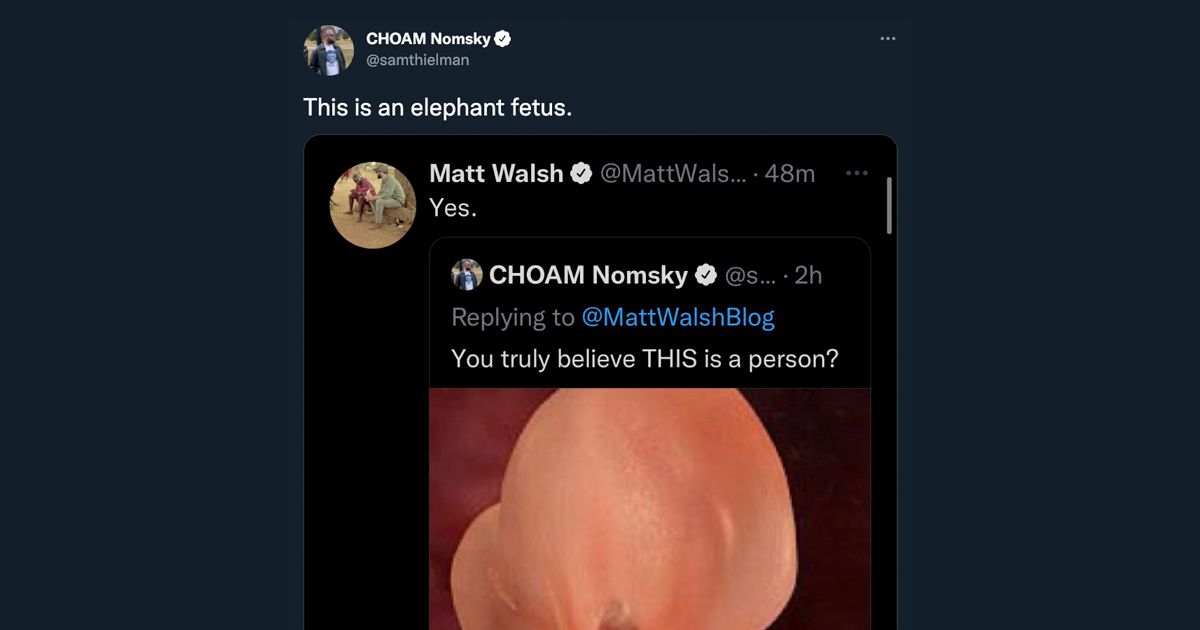 Claim:
On the day after Roe v. Wade was overturned, The Matt Walsh Blog tweeted support of a what appeared to be an elephant fetus ultrasound image (later deleted) during a discussion about human abortion.
Rating:

On June 25, 2022, The Matt Walsh Blog Twitter account purportedly responded to a question on the subject of abortion, apparently believing that a picture of an elephant fetus was that of a human. Seeing as there's no shortage of fake tweet screenshots out there, we looked to verify whether Walsh's tweet was genuine. We found evidence that the tweet was real but had been removed.

According to Google cache, a service implemented by the tech giant to archive websites, the tweet in the screenshot below was real:

This Twitter discussion on the subject of abortion occurred one day following the news that the U.S. Supreme Court had overturned Roe v. Wade, which essentially legalized abortion in the U.S.

A user named @samthielman tweeted a picture to Walsh and asked, "You truly believe THIS is a person?" In response, Walsh or someone with control of his account chose to quote-tweet the question instead of inserting a traditional reply underneath, answering with, "Yes." The tweet then vanished from Walsh's account after @samthielman revealed that the image showed that of an elephant fetus. Before Walsh's tweet disappeared, it had already been liked thousands of times.

According to two sources, the picture truly did show a fetus of an elephant.

Before Walsh engaged with the elephant fetus image, another tweet on Walsh's account read, "Could not be happier to see the pain and heartbreak of abortionists. Absolutely loving every minute of it." This may have been what prompted the back-and-forth discussion with @samthielman.

Charlie Kirk and the Dolphin Fetus

Walsh's apparent elephant fetus mishap was similar to an incident in which conservative activist and Turning Point USA founder Charlie Kirk was asked about a different picture.

In October 2021, actor and comedian Ben Gleib held up an image and asked Kirk, "You truly, in your heart of hearts, truly believe that this is a human being?" Kirk answered, "Without a doubt." Gleib then revealed to Kirk that the picture supposedly showed a dolphin fetus:

In addition to The Matt Walsh Blog, Walsh also writes for the conservative website The Daily Wire and appeared in the 2022 documentary, "What Is a Woman?"

In sum, yes, the tweet on the subject of abortion that showed Walsh's support of what turned out to be an elephant fetus was indeed a real online post.