Did Maryland 'Deplorables' Erect a Billboard Warning About Attempts to Impeach Donald Trump?

A viral photograph shows a real roadside sign near Huntingtown in Calvert County which warns "liberals" to arm themselves. 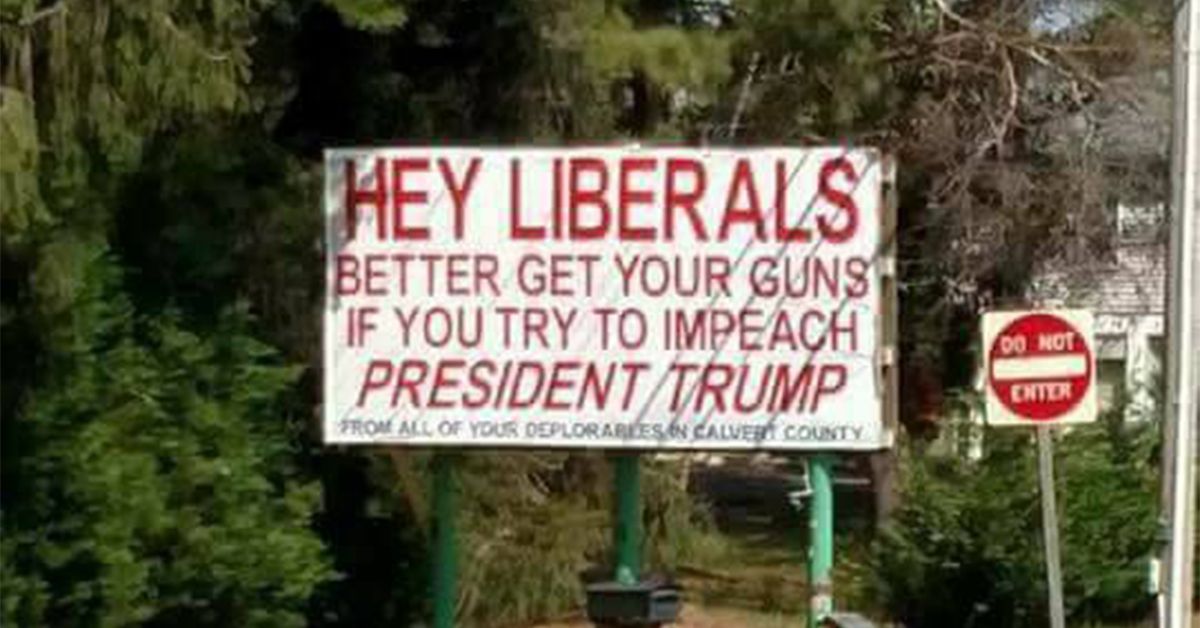 Claim:
A sign in Calvert County, Maryland was erected in May 2018, warning "liberals" to arm themselves in the event of attempts to impeach President Donald Trump.
Rating:

Two of the most contentious political issues in 2018 were gun control — a debate given new intensity after a February school shooting massacre in Parkland, Florida — and Special Counsel Robert Mueller's investigation into Russian election interference in 2016 and potential collusion with the campaign of President Donald Trump.

These topics overlapped for one resident of Calvert County, Maryland in May 2018, who put up what proved to be a controversial billboard warning "liberals" to arm themselves in the event that impeachment proceedings begin against Trump. A photograph of the billboard was posted to the anti-Trump "Lock Him Up" Facebook page on 5 May 2018, with the caption "Spotted in Maryland. Lock them up."

Hey liberals, better get your guns if you try to impeach President Trump. From all of your deplorables in Calvert County. Captain Dave Payne of the Calvert County Sheriff's Office confirmed to us that the billboard does exist, and that it had been erected by the side of the road near the intersection of Route 4 (Solomons Island Road) and Bowie Shop Road near Huntingtown in southern Maryland, which is around 40 miles southeast of Washington, D.C.

Payne said he was not aware how long the billboard has been up, but told us that the Calvert County Sheriff's Office and other local officials had contacted the person responsible for it; that person agreed to take it down as soon as they return from a trip out of town in order to "alleviate the controversy."

Payne told us that the Calvert County Sheriff's Office had not launched any criminal investigation, and emphasized that the sign's owner had decided to take it down of their own volition.