A rumored encounter between Martha Stewart and David Rockefeller has been dismissed as a tall tale. 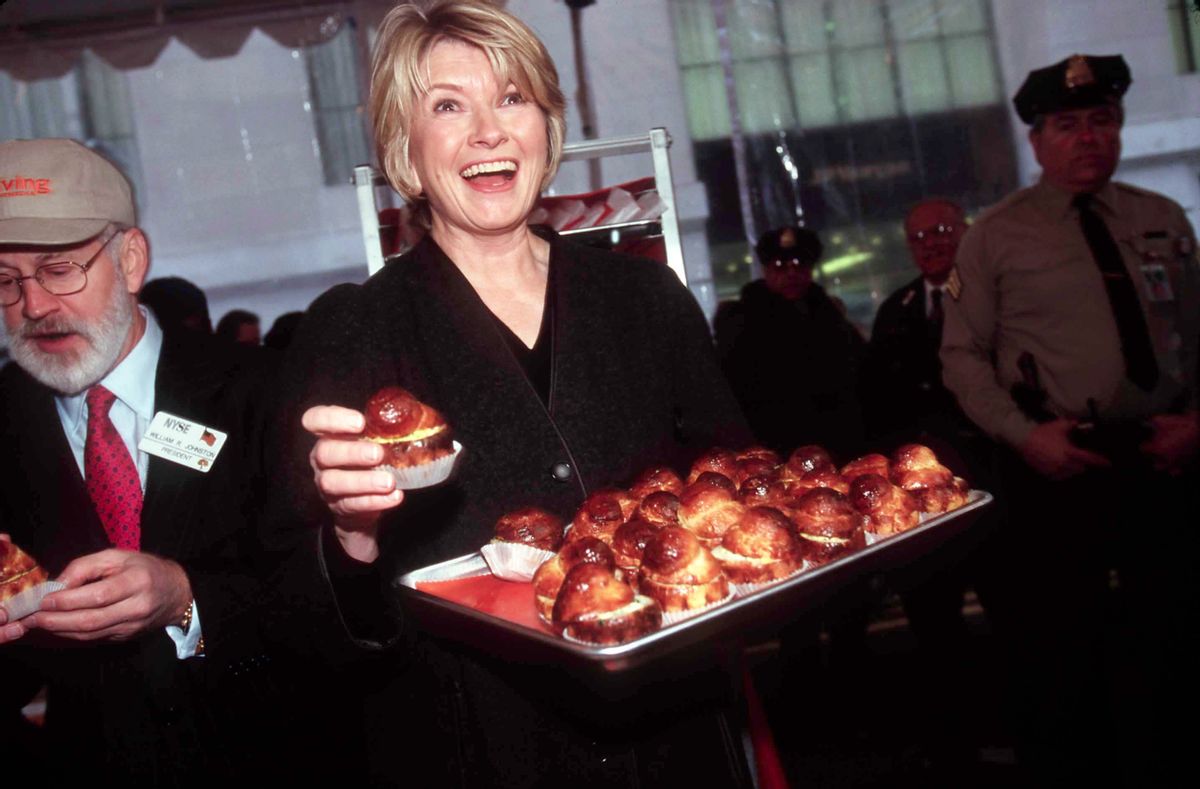 Claim:
Martha Stewart is refused the use of a telephone, only to discover greater celebrities are also denied access to it.
Rating:

In the handful of years since Martha Stewart has become a pop culture phenomenon, she's managed to ruffle more than a few feathers. Part of the current level of distaste is directly attributable to the perception of her as an overachiever, which leaves some people smarting from a comparative sense of inadequacy. She appears to set an impossibly high superwoman standard, and this makes her enemies because very few can honestly say they measure up to it. We therefore expect to see disparaging asides made about her homemaking and crafts skills (i.e., "Blanch carcass from Thanksgiving turkey. Spray-paint gold, turn upside down and use as a sleigh to hold Christmas cards" — from the specious Martha Stewart's Holiday Calendar), remarks that serve to trivialize both the activities and the person who finds satisfaction in performing them. Envy is often dealt with thusly; the green-eyed one working to pull the envied down to a more equitable level by belittling her accomplishments and interests.

Yet there's more to this current wave of Martha distaste than plain, old-fashioned envy: she is perceived, at least within the world of rumor, to have stepped on toes and badly treated those around her. Whether this perception is true or not is almost immaterial; what matters in this realm is how widely these characterizations are believed.

Martha Stewart, who now owns a fabulous estate on Mount Desert Island in Maine is standing in line at a local supermarket and asks to use the phone. Clerk says no. Martha, piqued, says: "Do you know who I am?" Clerk says no. Guy behind Martha taps her on the shoulder and says: "Do you know who I am?" Martha says: "No." Guy replies: "I'm David Rockefeller. And they don't let me use the phone either."

The rumor introduced above paints Stewart as demanding and overly full of herself. Enjoyment is gained from "seeing" her slapped back into place by a celebrity who outranks her and thus is capable of administering the coup de grace. His comparative ease with his status underscores her shrill insistence upon being recognized and kowtowed to, rendering her into a dismissable figure of fun. Also factoring in is the preception of Stewart as beyond the reach of the ordinary person, thus requiring a super celebrity figure in the form of a Rockefeller to stand up to her.

Is the story true? Well, no. But it does paint an accurate picture of how at least some have come to view this maven of fine living, so it's likely this tale will be kicking about for many a year.

"It's a nice little story," but it didn't happen, says Anne Tucker, manager of The Village Market in Seal Harbor on Mount Desert Island, where the encounter probably would have occurred. Tucker has heard the story a zillion times, and says it doesn't ring true: "First off, David Rockefeller would never announce himself that way."

David Rockefeller himself denied the rumor to the New York Post in September 2003, saying it was merely a tall tale. "Not that it's a particularly bad one," he laughed.


Those tales don't appear to have anything to them, but once again they serve to advance a rather unflattering view of this woman. Though these stories might not be truthful, according to , the 1997 unauthorized biography of Stewart as researched and written by Jerry Oppenheimer, what they say about her character is accurate. She has sued folks at the drop of a hat (some would say vindictively), and she has taken credit for the work of others.

Oppenheimer's tell-all book about this diva of the homefront was pulled together from interviews with more than four hundred people who know her. It paints an unrelenting picture of a domineering woman with a fiery temper who swears like a sailor, lies about her early family life, mistreats those who work for her, and who was regularly verbally abusive in front of others to her then-husband (they divorced in 1990).

The accuracy of Oppenheimer's view is a matter for debate, but it is worth noting that the litigious Stewart failed to take him to court for defaming her. She decried the book when it came out, but there was never any talk of filing a lawsuit against the author or of blocking publication of the biography.

Stewart has never before been slow to seek remedy through the courts for perceived wrongs. In 1995, her East Hamptons neighbor, Harry Macklowe, planted shrubbery between their two houses. Stewart accused him of attempting to "suburbanize the area with inappropriate dark greenery" and won a ruling from the village zoning board that it had been done illegally. Ultimately, she prevailed and was allowed to rip out the offending plants. Over the next few years she and Macklowe continued to war on each other through the city council, resulting in the council's file of paperwork relating to their disputes eventually exceeding one foot in height.

In 1997 Macklowe's landscaper, Matthew Munnich, claimed an angry Stewart used her vehicle to pin him against a gate after she returned home to find workmen building a fence between the two properties. Munnich sued her for harm inflicted, she sued him for defaming her character, and the courts threw out her suit. (The disposition of Munnich's suit is not known.) Munnich's attempts at the time of the assault to get charges laid against her were unsuccessful, with the county's district attorney, James Catterson, saying the dispute, "as objectionable as it may appear," did not warrant criminal prosecution and should be settled in civil court. (Munnich's statement to the police can be viewed at web site.)

On 2 September 1997, the National Enquirer ran a story titled "Martha Stewart Is Mentally Ill." It claimed Stewart "indulged in self-mutilation and threatened suicide" and had "frantic fears of being abandoned, a chronic sensation of feeling useless and empty, and a near-constant anger." Stewart sued the tabloid for The suit was settled in October 1999, with neither party disclosing the details of the settlement.

Bits of current lore continue to paint an unflattering portrait of Martha Stewart:

Dec. 1
Blanch carcass from Thanksgiving turkey. Spray-paint gold, turn upside down and use as a sleigh to hold Christmas cards.

Dec. 4
Address sympathy cards for all friends with elderly relatives, so that they're all ready to be mailed at the moment death occurs.

Dec. 11
Buy some cockroaches from the less fortunate; decorate eggs.

Dec. 15
Replace air in minivan tires with Glade "Holiday Scents" in case tires are shot out at the mall.

Dec. 17
Childproof the Christmas tree with garlands of razor wire.

Dec. 19
Adjust legs of chairs so each Christmas dinner guest will be the same height when sitting at his or her assigned seat.

Dec. 20
Dip sheep and cows in egg white and roll in confectioner's sugar to add a festive sparkle to the pasture.

Dec. 31
New Year's Eve! Give staff their resolutions. Call a friend in each time zone of the world as the clock strikes midnight in that country.

Jan. 21
Culture ancient DNA into dinosaurs for nieces and nephews.

Jan. 23
Align carpets to adjust for curvature of Earth.

Jan. 25
Receive delivery of new phone books. Old ones make ideal personal address books. Simply cross out the names and addresses of all the people you do not know.

Jan. 26
Review the Christmas '96 show and try to understand why Julia Child is much beloved even though her croquembouche was very much askew.

The list quoted above (which is now widely circulated on the Internet as a unattributed humor piece) comes straight from the pages of a 1996 Washington Post "Style Invitational" column, an ongoing reader-driven humor outlet. Readers were invited to submit inventive items for Martha Stewart's December-January calendar of projects. Why, you say? As Bob Staake (the lad who proposed this particular ribbing) said:

For those wretched few of you who do not subscribe to Martha Stewart Living, each month, Martha has a day-by-day list of the self-absorbed, anal-retentive, arts-and-crafty, vomitously precious things she plans to do, for your edification, so you can compare it with your schedule. (Your schedule: Take dog to vet for diarrhea. Martha's schedule: French-braid front lawn.) To give you a taste what it is like, this is her actual entry for "Update birthday calendar and phone list; laminate."

Each entry in the facetious calendar was authored by a different reader, folks who thus had no idea what the final list would look like or even what other howlers were being submitted. When taken all together, these entries form a cohesive and consistent portrait of a woman known only from a distance as a media figure. It's an eye-opener into the reality of what we can hide and what we can gild that so many people came up with the same perceptions of personality and motivations.

On the surface, this inventive list seems to poke good-natured fun at America's favorite overachiever. A closer examination reveals that the humor is of a poisonous, biting nature. Her rumored bilious behavior towards staff ("Flog gardener"), penchant for self aggrandizement ("Fax family Christmas newsletter to Pulitzer committee for consideration"), smugly superior attitude towards those she considers her inferiors ("Do my annual good deed: Go to several stores. Be seen engaged in last-minute Christmas shopping, thus making people feel less inadequate than they really are"), and a myriad of others sins all fall prey to lampooning in this darkly deadly ensemble piece.