We look into the conspiracy theory that Facebook founder Mark Zuckerberg's real name is Jacob Greenberg and he's the grandson of billionaire banker David Rockefeller. 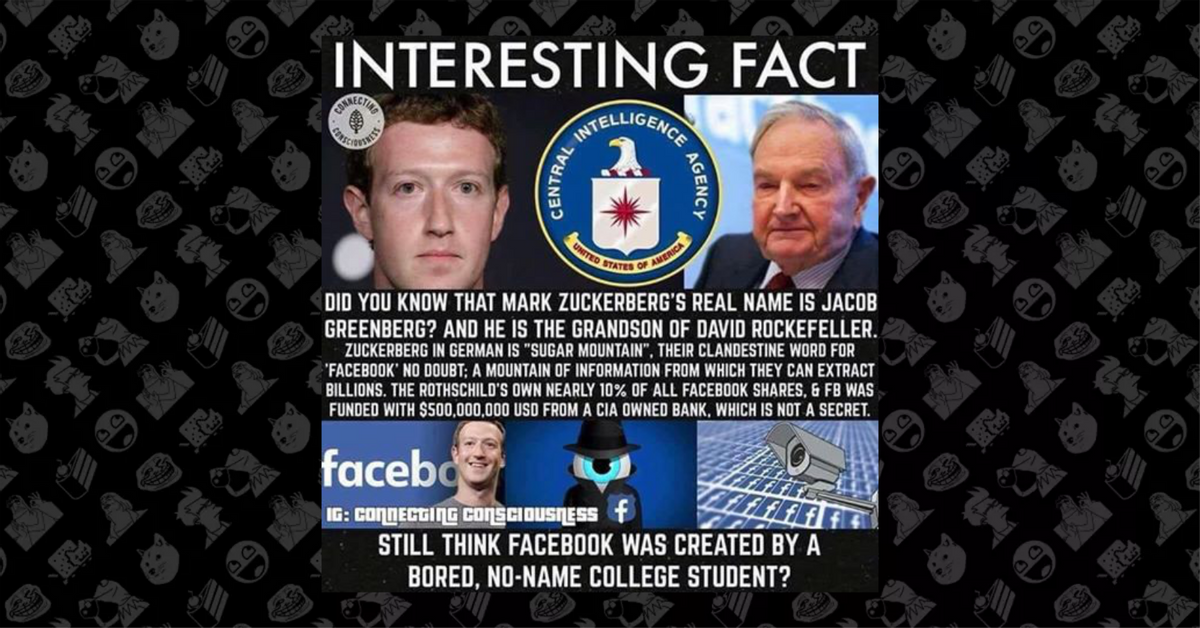 Claim:
Mark Zuckerberg's real name is Jacob Michael Greenberg and he is the grandson of billionaire David Rockefeller.
Rating:

Conspiracy theories presuppose surreptitious connections between wealthy and powerful interests, so the family trees of the rich and famous loom large in conspiracist circles. Two surnames in particular come up frequently in discussions of who secretly runs the New World Order, Rothschild and Rockefeller. Of the two, the Rockefeller family continued to hold currency because one of its patriarchs, former banker David Rockefeller, died on 20 March 2017 at the age of 101.

One of the strangest Rockefeller-related conspiracy theories first surfaced in May 2012 after an otherwise unremarkable police mugshot of someone arrested for marijuana possession in Maricopa County, Arizona, turned up that reminded some people of Facebook founder Mark Zuckerberg: Mark Zuckerberg is David Rockefeller’s Grandson I Thought Everyone Knew. Did You? https://t.co/J4x7uAzT9h What people think billionaire Mark Zuckerberg would have been doing with marijuana and drug paraphernalia in the middle of Arizona we don't know. In any case, this is a self-debunking conspiracy theory, in that anybody with access to Google can instantly check to see exactly how much Jacob Michael Greenberg (below left) and Mark Zuckerberg (below right) actually resemble each other (i.e., barely): If you're thinking there has to be something more that supposedly connects these two men, you're right. There are sources who claim that Jacob Greenberg/Mark Zuckerberg's maternal grandfather is none other than sometime Rockefeller associate Maurice R. "Hank" Greenberg, who allegedly married one of David Rockefeller's daughters. That's a less promising lead than it sounds, however. According to CNN, Greenberg married Corinne Phyllis Zuckerman (no relation to the Rockefeller family that we could find) and had four children named Jeffrey, Evan, Scott, and Cathleen — but none named Jacob.

For his part, Facebook founder Mark Zuckerberg was born on 14 May 1984 to middle class parents, Ed and Karen Zuckerberg (no relation to the Rockefeller family that we could find), in White Plains, New York.

For Jacob Greenberg's part, we know nothing about him except that his mugshot appeared on the Internet a few years ago in connection with an arrest in Arizona. We're reasonably sure he has no connection with the Rockefeller, Greenberg, or Zuckerberg families.