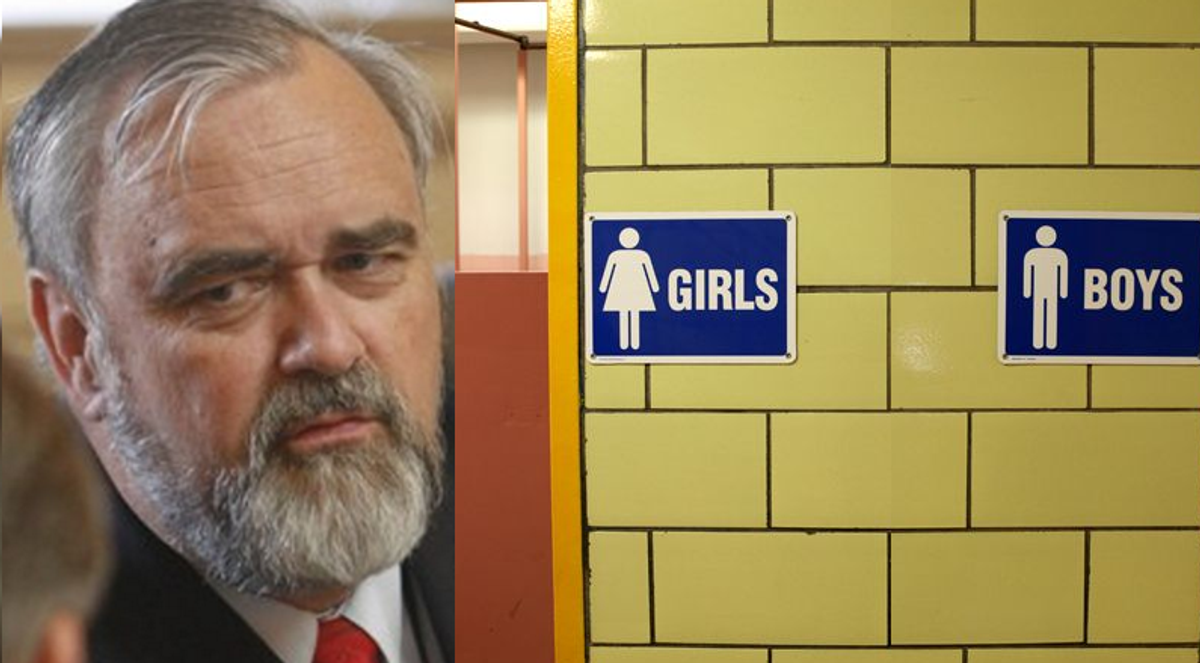 Claim:
A Virginia lawmaker proposed a bill that mandates on-site physical examinations of children's genitals to determine which gendered bathroom they're authorized to use.
Rating:

Virginia lawmaker Mark Cole proposed controversial bill HB663, which in part requires the use of bathrooms be based on "anatomical sex" in public schools.

Cole's proposal explicitly stated that schoolchildren would be subject to "genital checks" before being allowed to use restrooms.

On 12 January 2016, the web site Raw Story published an article (with the grammatically incorrect headline "Virginia GOP bill would require schools to verify children's genitals before using the restroom) reporting that Republican Delegate Mark Cole had proposed a bill mandating that schools physically examine children to determine whether they were using boy's/girl's bathrooms that matched their genitals (rather than their asserted gender identity):

A bill filed by a Virginia lawmaker would require schools to be certain that children are using the restroom corresponding to their "correct anatomical sex."

The legislation, which would prohibit transgender students from using the bathroom matching their gender, is being sponsored by Republican Del. Mark Cole.

House Bill 663 defines "anatomical sex" as "the physical condition of being male or female, which is determined by a person's anatomy."

"Local school boards shall develop and implement policies that require every school restroom, locker room, or shower room that is designated for use by a specific gender to solely be used by individuals whose anatomical sex matches such gender designation," the measure states.

Civil rights advocate Tim Peacock noted that "adults would be required to inspect children’s genitals before they use the bathroom" for the legislation to be enforceable.

"This is what the conservative movement has devolved into: forcing children to allow adults to examine their genitals out of misplaced fear that transgender kids and adults might commit a hypothetical never-before-seen act of violence or sexual aggression (that would still be against the law with or without transgender protections)," Peacock wrote.

Many online articles on this topic cited Richmond Sunlight, a web site that provides both the text of bills and "a plain English description" of pending legislation for residents of the state of Virginia. The Richmond Sunlight highlighted in yellow changes to the Code of Virginia proposed by Cole in that a href="https://www.richmondsunlight.com/bill/2016/hb663/fulltext/" target="_blank">bill (HB663):

A. For purposes of this section, "anatomical sex" means the physical condition of being male or female, which is determined by a person's anatomy.

B. Local school boards shall develop and implement policies that require every school restroom, locker room, or shower room that is designated for use by a specific gender to solely be used by individuals whose anatomical sex matches such gender designation. Such policies may also provide that a student may, upon request, be granted access, to the extent reasonable, to a single stall restroom or shower, a unisex bathroom, or controlled individual use of a restroom, locker room, or shower.

Although Cole's legislation was a fairly clear shot across the bow at concessions to transgender students in the United States, none of the language in his bill specifically mandated physical genital checks be performed by school officials (or, as some headlines insinuated, Cole himself). Critics argued that the language of the bill was worryingly vague and that it could not possibly be enforced without requiring direct genital inspections, but other options were possible (such as accepting documentation from a pediatrician already knowledgeable about a child's "anatomical sex").

Cole also proposed a fine on students for violating the law, an aspect pinpointed by many transgender advocates as particularly objectionable.

At a basic level the bill required proof of "anatomical sex" as defined by its provisions, but much of the media coverage led readers to believe children would be genitally inspected at school bathroom doors, which was misleading. Cole's law indeed proposed such "checks" be codified into law (to prevent transgender individuals from using bathrooms that matched their gender but not their genitals), but not in the specific manner widely described on social media.