The video of a woman who physically resembles Greene went viral, along with some false claims. 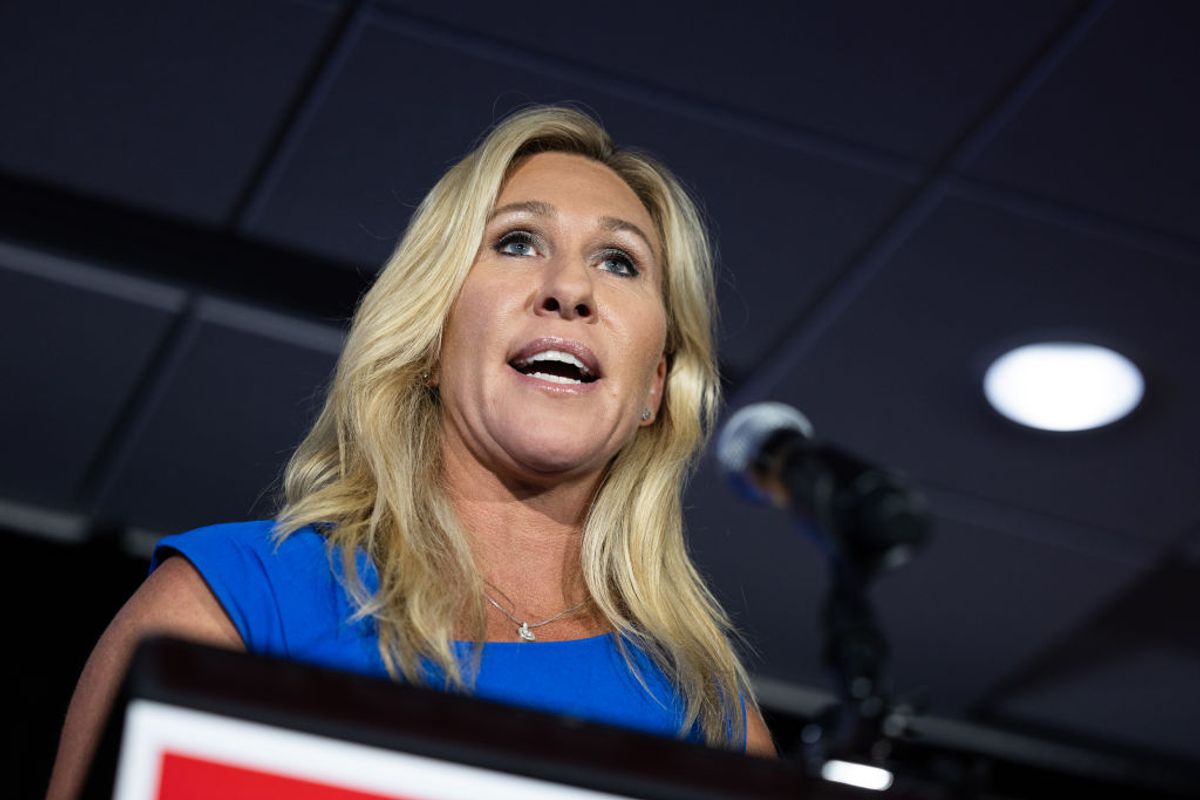 In early September 2022, a video went viral that showed a young blonde woman auditioning for the television singing competition "American Idol," which first aired in 2002. The reason the video gained so much popularity in 2022, a full two decades after that particular episode of the show aired, was because the woman bore a physical resemblance to U.S. Rep. Marjorie Taylor Greene, R-Georgia. The woman in the video above identifies herself as Stefanie Sugarman from Alta Loma, a community in Southern California's Inland Empire. The video of Sugarman's audition has been online for years, apparently because she gained a degree of internet fame for giving an outlandish performance:

Our research confirms these are two completely different people, which we will explain below.

Clues from the Video

A few tells from the video itself: The woman in the video has a different talking voice than Greene and no Southern accent; the "American Idol" hopeful said she was from Alta Loma, a community in Southern California, and was 23 years old at the time of the audition; she also said she worked in marketing, specifically selling cheese.

In 2002, the year the episode aired, Greene, who was born in 1974, would have been 28. Greene has furthermore always lived and worked in Georgia, per some biographical information we found on her, and never lived in California selling cheese.

Why Do People Think It's Greene?

Misinformation stating Greene is the person in the video exploits the fact that the two women physically resemble each other. Greene is a polarizing political figure who generally tends to get a lot of internet and media attention because of her incendiary profile and support for conspiracy theories. She is herself the subject of various internet rumors and discourse, which are sometimes false and sometimes true.

We reached out to Greene's spokesman Nick Dyer, who offered a rather snarky confirmation that Greene wasn't the singer in the video.

"Quite frankly, if your readers aren’t smart enough to see through this Blue Anon conspiracy theory, there’s nothing that will convince them otherwise," Dyer wrote in an email.

"Blue Anon" is a play on the term "Qanon," a conspiracy theory that holds high-profile Democrats and celebrities are part of a satanic child trafficking cabal, and that former U.S. President Donald Trump was secretly leading a fight against the cabal. "Q" was the moniker of an alleged high-level government source dropping clues. It is one of the conspiracy theories Greene has been criticized for promoting before her 2020 election. "Blue Anon" refers to the use of the color blue by Democratic political figures.

We asked Dyer for comment on Greene's past support for Qanon. He pointed us to a speech Greene gave on the House floor before being stripped of committee assignments, in which she stated she regretted her past remarks on the subject, but was "allowed" to believe them because of her dissatisfaction with the American government. Nevertheless, in February 2021, her personal Twitter account was suspended for violating the platform's policies against spreading misinformation about COVID-19. She had also promoted false claims that the 2020 presidential election was stolen via mass-scale voter fraud.

Who is Stefanie Sugarman?

In the video, Sugarman dances wildly before appearing before the judges and singing her rendition of "Knockin' da Boots" by the rhythm and blues group H-Town. The performance earned her a rejection from the show's judges, Simon Cowell, Paula Abdul, and Randy Jackson, the latter of whom told her, "Stefanie, you're not a very good singer."

Sugarman reacted in disbelief, and even went back into the judge's room to confirm her rejection, asserting that she was, in fact, a good singer. Since the episode, which was part of "American Idol's" first season, she has maintained a level of internet fame, often appearing in tributes or compilations of "funny" or "bad" "American Idol" auditions.

That dressing down by the judges may have put another person off singing forever, but not Sugarman. Despite her rejection from the show, Sugarman kept singing. She now has a powerful alto voice and goes by the stage name "Sugarwolf."

Sugarman's talent manager, Tanesia Tramell, confirmed in an email to Snopes that Sugarman is the person in the viral video (not Greene). Sugarman even has a single, "Back to Me," coming out at the end of the first week of September 2022.

"Stefanie was very young and didn't really have the correct team to guide her on song choices back then," Tramell said. "However, she is actually a brilliant and very soulful singer."

This story has been corrected to note that the "American Idol" judge who said Sugarman was "not a very good singer" was Randy Jackson.