The controversial Republican Congresswoman defended her stance on gun rights by describing her own experience as an 11th grader in Forsyth County, Georgia. 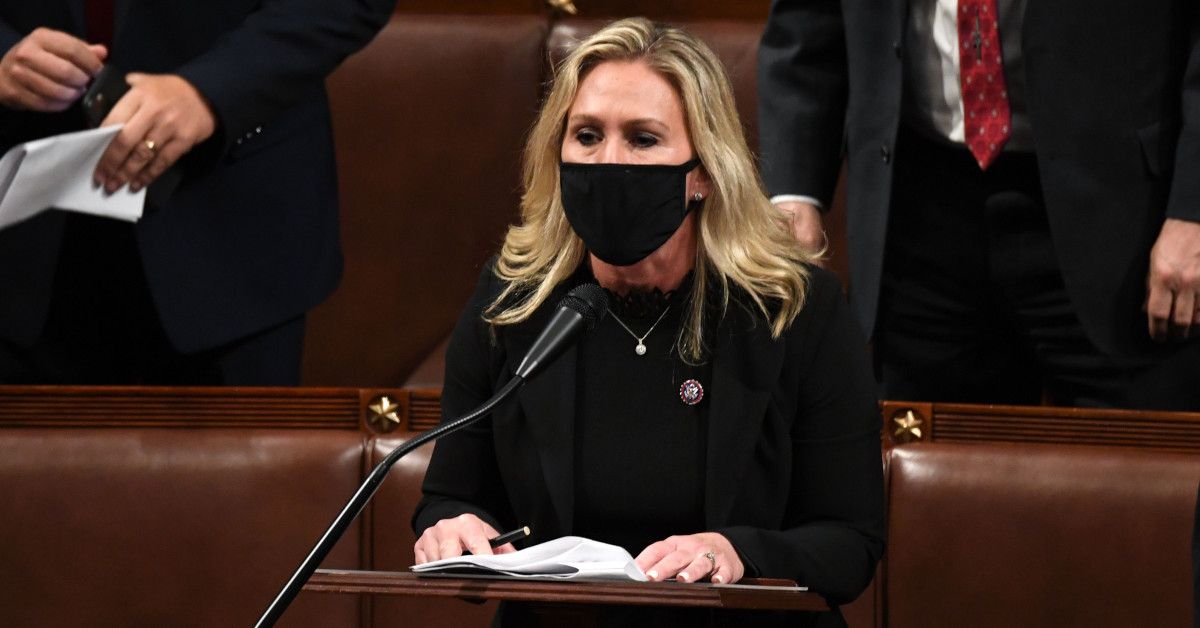 Claim:
While U.S. Rep. Marjorie Taylor Greene was in high school, one of her fellow students held hostages at gunpoint, giving her firsthand experience of "the fear" associated with gun violence.
Rating:

Greene was enrolled at South Forsyth High School in Georgia in September 1990, when a fellow student held hostages at gunpoint.

We could not verify that Greene was in attendance at school that day.

In February 2021, first-term Congresswoman Marjorie Taylor Greene, a Republican from Georgia, came under persistent criticism for her past remarks and actions, which included promoting and endorsing anti-semitic conspiracy theories, speculating that school shootings may have been faked in order to prompt tighter gun control policies, and apparently endorsing calls for prominent Democratic politicians to be assassinated.

Greene, who has long promoted the QAnon cluster of conspiracy theories and supported efforts to overturn the lawful and legitimate election of President Joe Biden, also came under fire when footage re-emerged online showing her following and shouting at David Hogg, a then-18 year-old gun control advocate and a survivor of the February 2018 Parkland, Florida, mass school shooting.

Under pressure from their Democratic counterparts, on Feb. 3, House Republicans held a vote on whether or not to remove Greene from her two committee assignments (Budget, Education and Labor). She survived that vote, but the following day the full Democratic-led House voted her off those committees, an unprecedented disciplinary action by the House of Representatives against a member of the minority party.

Speaking from the floor of the House before that vote on Feb. 4, Greene defended herself and her past remarks, addressing in particular the controversy over her interactions with Hogg. She introduced her own personal history into the debate by referring to an incident in which one of her high school classmates "brought guns to school and took our entire school hostage":

You see, school shootings are absolutely real. And every child that is lost, those families mourn it. I understand how terrible it is because, when I was 16 years old, in 11th grade, my school was a gun-free school zone and one of my schoolmates brought guns to school and took our entire school hostage. And that happened right down the hall from my classroom. I know the fear that David Hogg had that day. I know the fear that these kids have.

Greene has invoked her personal experience before as a way of enhancing the credibility of her arguments against gun control measures. In particular, she has previously addressed the hostage-taking incident to Hogg.

In January 2020, Hogg tweeted a video in which he encouraged viewers to express their support for gun control measures being considered by the Virginia legislature. At the time, Gov. Ralph Northam declared a state of emergency in Richmond and banned the possession of firearms near the state capitol, amid official warnings of potential violence by gun rights activists and militia groups. In response to Hogg's video, Greene wrote on Twitter:

When I was in 11th grade in a gun free school zone, one of my school mates brought guns to school and took our school hostage. I know that same fear, of being completely unprotected while a mentally unstable student wants to unleash their rage on us. We were trapped in our classrooms that day, scared and confused, not knowing who would protect us if the bad guy with the gun came to our classroom. We also knew that no where inside our school was a good guy with a gun to stop the bad guy with a gun.

Unlike you [Hogg] I walked out of my school that day, knowing that our God given guaranteed [Second Amendment] right is our greatest freedom and I am determined to always protect our gun rights. Kids should be protected at school NOT left as unprotected targets ... As a student, I learned that day having no good guy at my school to stop the bad guy with guns, and gun free school zones and gun control laws were not the answer, it was actually the problem.

After Greene's House speech in February 2021, Snopes readers asked us to examine the accuracy of her description of a hostage-taking incident at her high school.

Greene did indeed attend a high school where, in September 1990, one of her fellow students held his classmates hostage at gunpoint. She was enrolled at the school at the time, though it wasn't possible for us to verify whether she was in attendance on that particular day, and a school district spokesperson said, based on the recollections of a former teacher, that Greene does not appear to have been in either of the classrooms where the armed student held others hostage. As a result, we are issuing a rating of "Mostly True" as to Greene's descriptions. On Sep. 6, 1990, when Taylor was in 11th grade, as she accurately described, her 17-year-old schoolmate Randy Floyd Addis arrived at school armed with a shotgun, handgun, and knife and took dozens of his classmates hostage, releasing all but nine of them before being overpowered by a small group of students and arrested.

No one was physically injured, but the five-hour incident was, understandably, traumatic for those involved. Detailed accounts of the events of that day can be found here and here.

Addis was charged as an adult, convicted of kidnapping and aggravated assault, and was sentenced to eight years in prison in May 1991. Addis was released on parole in November 1993 after the Georgia State Board of Pardons and Paroles determined, according to The Atlanta Constitution (now the Atlanta-Journal Constitution) that the hostage-taking was prompted by a psychiatric disorder best addressed by treatment rather than further incarceration.

During a sentencing hearing in May 1991, Addis said he had planned to provoke his own fatal shooting by police after kidnapping his fellow students and taking a boat into international waters.

In February 2021, a spokesperson for the Forsyth County school district told The Atlanta Journal-Constitution that, based on conversations with a former teacher at the school, Greene was likely not among the hostages held at gunpoint by Addis. A news report from the day after the hostage-taking stipulated that Addis released dozens of hostages within minutes, and that only one female student (not Greene) was among the smaller group of nine students held for a further five hours.

The fear and uncertainty experienced by anyone even adjacent to a hostage-taking is undoubtedly real, legitimate and valid, and the victims of that kind of gun violence are not limited only to those who are directly physically confronted with it or trapped in the same room as an assailant. Greene's description of her personal experience should be understood with that in mind. Furthermore, there is no specific, compelling reason to believe that Greene was not in attendance at school on the day in question and did not genuinely experience the fear she described in her recollections.

However, in light of the fact that it was not possible to independently verify her attendance at school on the day of the hostage-taking, we are issuing a rating of "Mostly True" as to the claim that an armed student held hostages at gunpoint at Greene's high school, thus giving her firsthand experience of the fear associated with gun violence, especially in a school setting.