Is the Video of 'Marines Perform Boarding Exercises with Jetpacks' Real?

A video of a man using a jetpack out at sea near a military ship was posted on Facebook, which led readers to ask us about it. 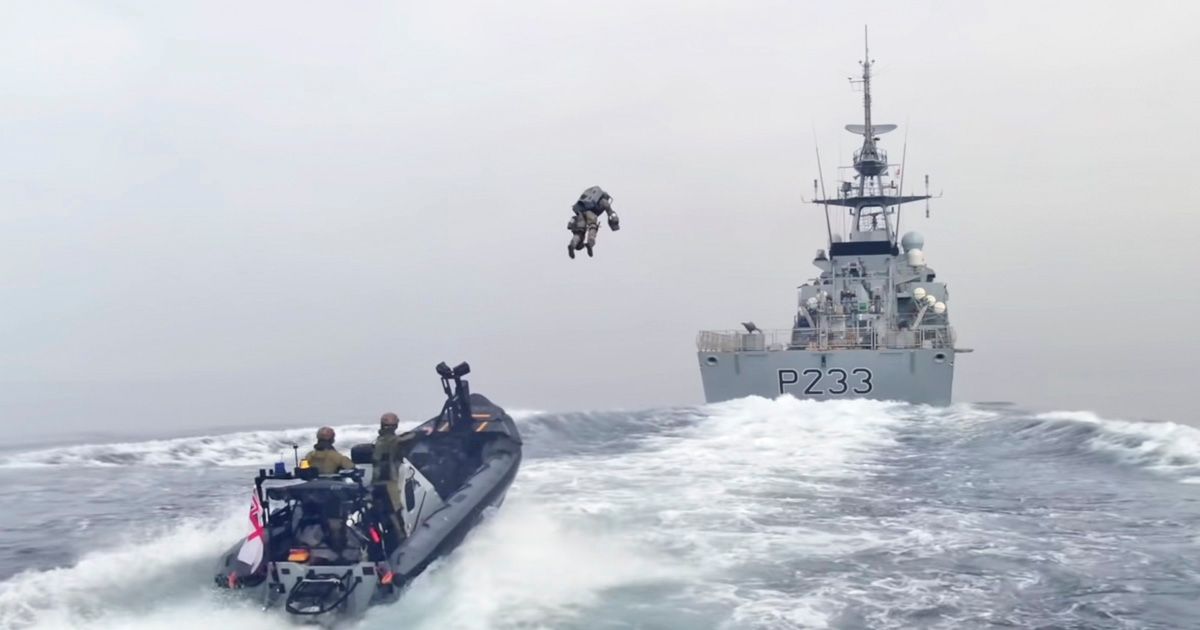 A Facebook post and Reddit thread said that a video showed Marines perform boarding exercises with jetpacks and landing on a high-speed ship. (Image Via Gravity Industries)

Claim:
A video shows a Marine flying with a jetpack toward a military ship at sea.
Rating:

The video is real and had not been doctored. However, the man shown using the jetpack, known as a "Jet Suit," was an operator for Gravity Industries, not an active British Royal Marine.

On June 27, 2022, comedian Josh Wolf posted a video to Facebook that showed a Reddit post with the caption, "Marines perform boarding exercises with jetpacks and landing on a high-speed ship." Within four days, it had been viewed more than 7 million times. Readers emailed us to ask if the clip was real. We're happy to report that the video was genuine and had not been doctored.

In the Facebook clip, a man using a jetpack boards a moving vessel with special equipment attached to both of his arms. The video showed a screen recording of a Reddit post from Jan. 6, 2022. Months later, the post had received a total score of more than 117,000 points. For any readers who aren't familiar with Reddit, this score was enormous and made it one of the most upvoted posts for the month of January. (Upvotes are similar to Facebook "likes.")

The original video was posted to YouTube by Gravity Industries on May 1, 2021. Gravity Industries created the jetpack, which it referred to as a "Jet Suit." "Thanks to Royal Marines LLC for setting up a very successful exercise testing the capability of the Gravity Jet Suit to support RM boarding ops," the video's description read.

We found additional reporting from Business Insider, which published that the men shown flying the jetpacks in the longer YouTube video were Gravity Industries operators, not active British Royal Marines. The story also mentioned that Trial sponsor Lt. Col. Will Clarke RM said of the Jet Suit, "It shows significant promise and we will watch its development with continued interest."

The Gravity Industries YouTube channel showed many more videos of its products being tested across the world.

The clip may have reminded some readers of jetpacks used in movies, such as the characters Jango and Boba Fett in the "Star Wars" films. Jetpacks also appeared in "Minority Report," "The Rocketeer," and "Jingle All the Way," among others.

In sum, yes, the "Marines perform boarding exercises with jetpacks" video was real. However, the clip showed Gravity Industries operators flying the special Jet Suits, not active Marines or other military members.

ILoveRegenHealth. “Marines Perform Boarding Exercises with JETPACKS and Landing on a High-Speed Ship. The Future Is Now, Old and Young Man.” r/nextfuckinglevel via Reddit, 6 Jan. 2022, https://www.reddit.com/r/nextfuckinglevel/.