The tale of a shoplifter who stabbed a toy-collecting Marine and was then whomped by other Marines has been embellished for humorous effect. 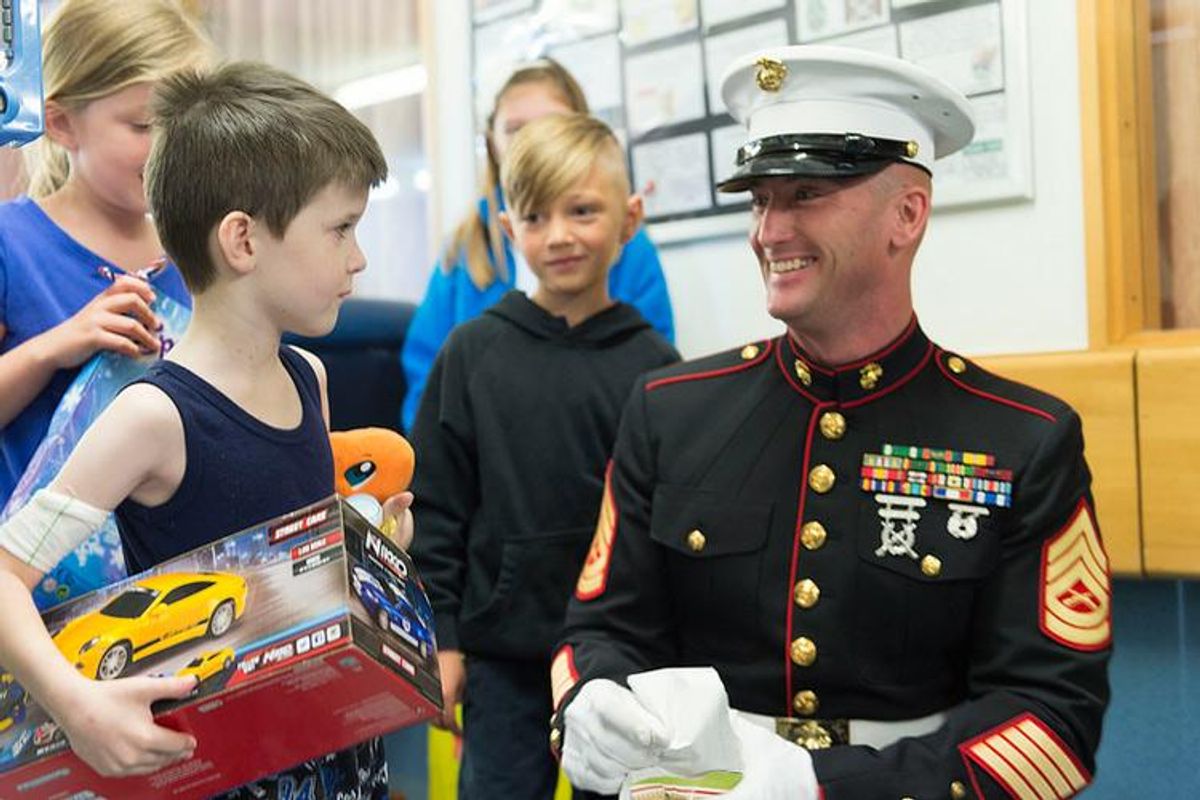 Claim:
A shoplifter who stabbed a Marine collecting Toys for Tots was then whomped by other Marines.
Rating:

At about on 26 November 2010 (which was the day after Thanksgiving, better known as "Black Friday"), those manning the surveillance cameras at a Best Buy in Augusta, Georgia, spotted a shopper cutting a Dell laptop computer from its packaging and stuffing it down his pants. According to police, store security personnel approached the suspect, 39-year-old Tracey Attaway of Waynesboro, Georgia, and asked him to return the merchandise. Attaway became angry, released the laptop, and ran out the front door, pulling a knife and knocking down a Best Buy employee in the process.

Outside the store's entrance were four Marines and seven volunteers collecting donations for Toys for Tots. One of the former group, Duggan, clotheslined the running man, bringing him to the ground. The assailant regained his feet and swung his knife, stabbing Duggan, then was quickly tackled by several other Marines and members of the store's loss-prevention team, who held him in the parking lot until deputies arrived:

The injured Marine was taken to Eisenhower Army Medical Center and released after receiving three stitches. He was well enough the next day to drop off a toy for donation at a nearby WalMart store:

Cpl. Duggan's attacker, Tracey Attaway, was jailed and charged with armed robbery, aggravated assault, and possession of a knife in the commission of a crime, and in October 2011 he was sentenced to life in prison. (Attaway faced the maximum sentence on all assault and theft charges because he was a convicted felon with arrests on his record.)

However, what makes this incident an enduring item of interest on the Internet is an account of the crime which was circulated via in December 2010 and presented as a Associated Press reporting of the incident:

AUGUSTA, Ga. - A U.S. Marine reservist collecting toys for children was stabbed when he helped stop a suspected shoplifter in eastern Georgia.

Best Buy sales manager Orvin Smith told The Augusta Chronicle that man was seen on surveillance cameras Friday putting a laptop under his jacket at the Augusta store.

When confronted, the man became irate, knocked down an employee, pulled a knife and ran toward the door. Outside were four Marines collecting toys for the service branch's "Toys For Tots" program.

Smith said the Marines stopped the man, but he stabbed one of them, Duggan, in the back. The cut did not appear to be severe.

The suspect was transported to the local hospital with two broken arms, a broken leg, possible broken ribs, assorted lacerations and bruises he obtained when he fell trying to run after stabbing the Marine.

The suspect, whose name was not released, was held until police arrived. The Richmond County Sheriff's office said it is investigating.

Although that account was indeed based on an Associated Press (AP) news article, it contained a paragraph not found in the original report:

The suspect was transported to the local hospital with two broken arms, a broken leg, possible broken ribs, assorted lacerations and bruises he obtained when he fell trying to run after stabbing the Marine.

(The audience is supposed to read between the lines quoted above and conclude that the suspect did not fall, but rather was beaten by the other three Marines.)

None of the news accounts, police reports, or interviews about this incident indicated that Attaway was injured, either while being subdued or afterwards. That bit was pure invention on the part of some person who inserted the additional paragraph into the news account, thereby transforming it into a "Don't mess with the Marines" object lesson. A fake image representing a newspaper article was later created for this item, one which added the (apocryphal) statement that the fleeing suspect sustained multiple injuries "when he slipped and fell off the curb": Sightings:   In the 1974 film Death Wish, a construction worker who takes part in the chasing down and beating of a would-be mugger (resulting in the mugger's receiving two broken arms, a broken jaw, and cracked ribs) tells a television reporter that "The poor guy musta fell down."