Marine veteran Christopher Marquez was involved in an altercation at a Washington, D.C., McDonald's, but police said there was no indication the argument involved Black Lives Matter activists. 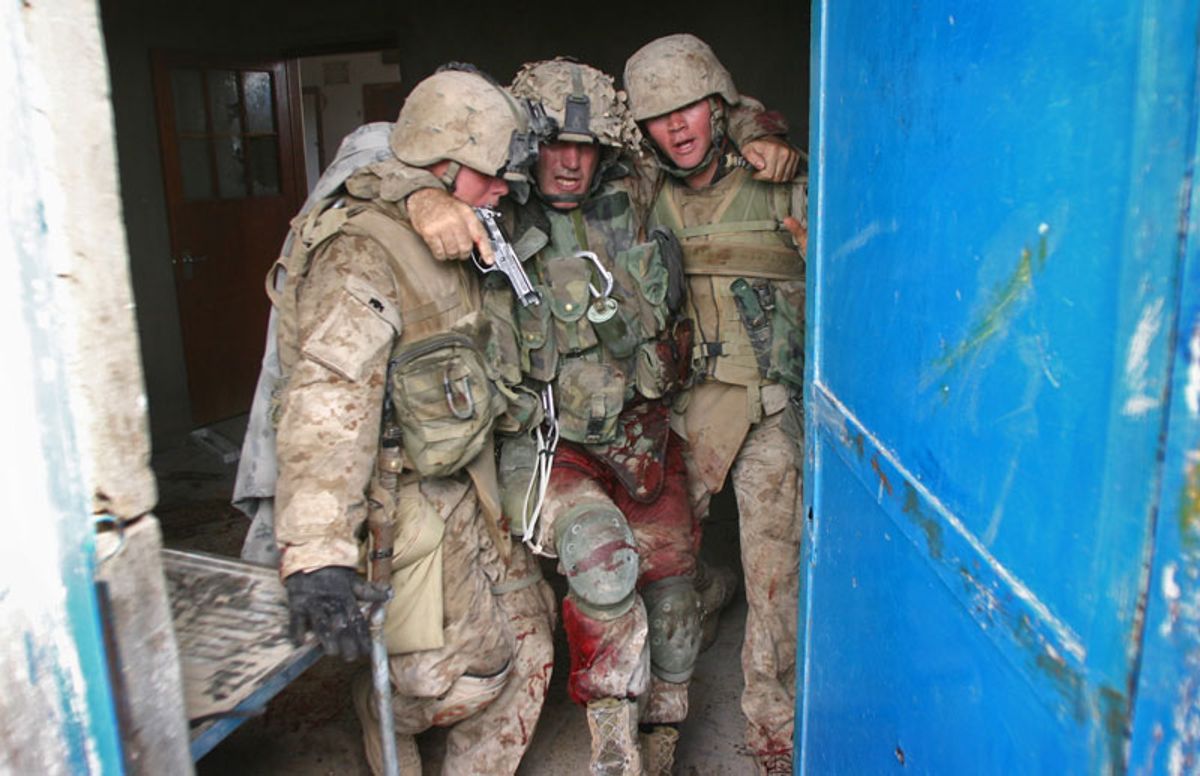 Marine veteran Christopher Marquez was involved in an altercation with at a Washington, D. C.-area McDonald's, and the parties involved remain unidentified.

The teens involved have been identified as Black Lives Matter activists and are sought in connection with a "previous incident."

On 15 February 2016, the web site The Daily Caller published an article about an altercation involving Marine veteran Christopher Marquez.  The item was written entirely from information provided by Marquez himself (supplemented by information obtained by The Daily Caller from police and the McDonald's at which the altercation occurred), and held:

A former Marine became the target of an alleged assault in a McDonald’s Friday night, as a crowd of youths cornered him and demanded he answer the question, “do you believe black lives matter?” Before knocking him unconscious and robbing him.

“I remember this group of teens harassing me while I was eating, they surrounded my table and kept on asking me ‘Do you believe black lives matter,'” Marquez told The Daily Caller News Foundation. “Then they started calling me a racist. I can’t recall if they were saying anything else to me at this moment because the blow to my head really screwed up my memory.”

DeAnthony Mason, manager of the McDonald’s, reviewed security footage and told Marquez in a phone call Saturday that when he left the restaurant a teen with a white shirt struck him on the side of the head, knocking him unconscious. The other teens then converged on his incapacitated body, taking his belongings. The head blow Marquez sustained left his memory dazed, but Mason’s review of security footage helped him piece together what occurred.

Credit card transactions reviewed by The Daily Caller revealed that Marquez’s cards later were charged more than $115 at a liquor store, Five Guys and a Walmart.

The teens involved in the attack were being sought by police for a previous incident, Mason said, according to Marquez.

But the D.C. Metropolitan Police told FoxNews.com Wednesday that they are still working to identify the four people in the video.

According to the Daily Caller, which first reported the incident, Marquez was able to take a cab back to his apartment, where building employees called police. He was treated at George Washington University Hospital for head trauma.

The Washington Post appeared to be largely alone in independently verifying Marquez's account outside The Daily Caller's original item, reporting that the incident occurred at a McDonald's on the 900 block of E Street NW. The paper confirmed that police were unable to verify some of Marquez's claims, adding that surveillance video of the altercation wasn't immediately conclusive:

A former U.S. Marine was assaulted at a downtown Washington McDonald’s restaurant Friday night in an attack the victim said was racially motivated, according to D.C. police ... Christopher Andrew Marquez — who attends American University and ran unsuccessfully for Congress in 2014 in California — said in an interview that the attack occurred after several black youths asked him whether “black lives matter” and then called him racist ... The incident was first reported by the Daily Caller, a conservative Internet news and opinion site.

Police could not verify the motive as described by Marquez and said they are continuing to look into the case. Dustin Sternbeck, the chief D.C. police spokesman, said detectives are reviewing surveillance video of the assault but it was not immediately clear what it shows.

“It’s an active investigation, and in this case, as in any other, we’re going to investigate it to the fullest,” Sternbeck said.

Marquez said they were trying to intimidate him, and soon after he said things got fuzzy. He said he believes he was hit in the back of the head with what might have been a pistol ... He said he contacted the restaurant manager about the incident, who he said provided him with some details of the attack. The manager could not be reached for comment.

The bulk of other outlets' reporting seemed to be nothing but unvetted statements from Marquez to The Daily Caller and other outlets.  The reporting was uncritical, despite Marquez's own admission that his memory of the attack was spotty. (In one account, Marquez stated that his recollection was jogged by a phone call with Mason about the incident, revealing that some of the details he "remembered" were possibly described or suggested to him after the fact.)

We attempted to contact Mason (the manager with whom The Daily Caller discussed the security footage) but were unsuccessful in reaching him. Another manager at the restaurant said Mason "might" call us back.

We also spoke with an officer from Washington D.C.'s Metropolitan Police Department about the widely-circulated claims, who confirmed that Marquez was involved in an altercation at the McDonald's in question on 12 February 2016. The officer said records indicated that after an interaction between the individuals involved and Marquez, one of the four males allegedly called him a "racist." No details were available about the conversation or events which led up to that point, and even that detail was provided solely by Marquez.

We asked whether multiple news reports citing the Black Lives Matter movement were supported by police records. The officer said there was no indication that any of the individuals were involved with (or even mentioned) Black Lives Matter. The officer confirmed that Marquez was robbed, but we were unable to corroborate reports that his credit cards were used at a Five Guys or a Walmart (or how teens were able to use the cards at a liquor store).

Finally, we asked about Marquez's assertion the teens were sought by police for a "previous incident." The officer said that claim did not match the report.

So while it's true Marquez was involved in an altercation and subsequently robbed, the identities of the suspects remained unknown. Police in Washington, D.C. told us that there was no evidence of a link between the dispute and Black Lives Matter activism, nor did any police reports suggest the teens were already wanted for a "previous incident."

On 18 February 2016, the YouTube channel DC Metropolitan Police Department published a video titled "Persons of Interest in Agg. Assault/Robbery (Pickpocket), 900 b/o E St, NW, on February 12, 2016," along with a statement:

The Metropolitan Police Department seeks the public's assistance in identifying and locating three persons of interest in reference to an Aggravated Assault and Robbery (Pickpocket) incident which occurred in the 900 block of E Street, NW, on Friday, February 12, 2016 at approximately 9:40 PM. The subjects were captured by the establishment's surveillance cameras

The video footage did not feature an audio component. On 23 February 2016, WUSA reported two teens were arrested in connection with the incident; WTVR added that police "made no mention of motive":

Two teens have been arrested in connection to the assault and robbery of a veteran Marine sergeant, D.C. police said.