'Man Saves Her Baby' Ad About Mama Elephant Is Misleading 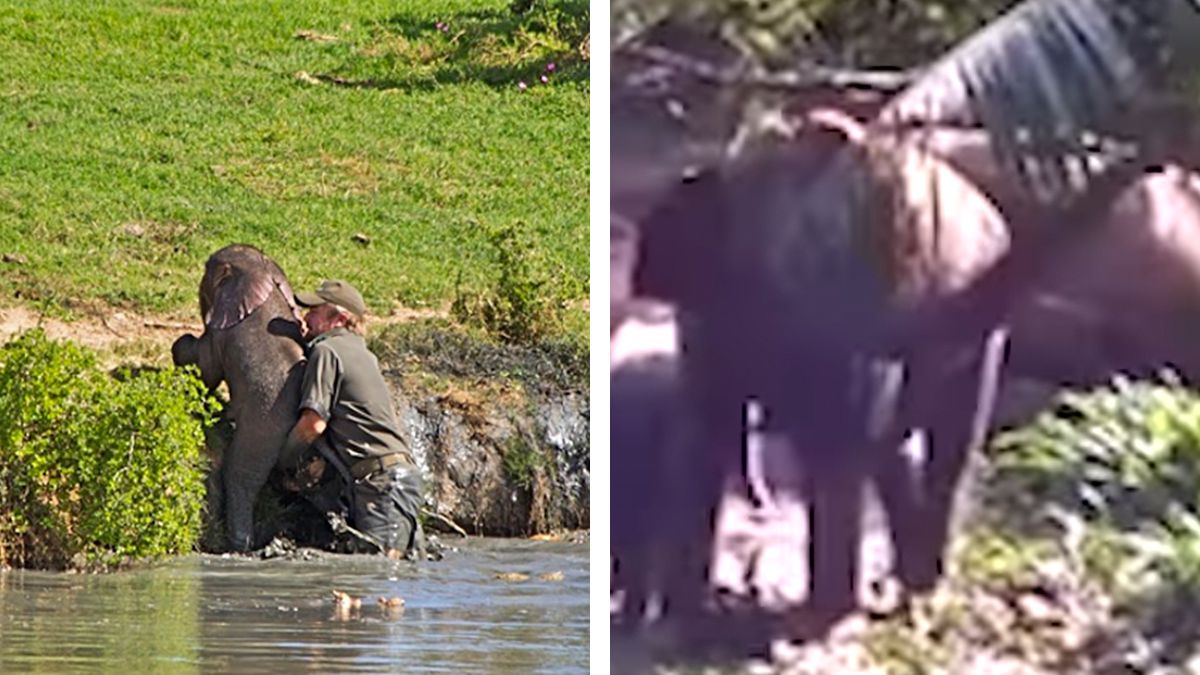 Claim:
A ranger was photographed lifting a baby elephant out of a watering hole and was later "thanked" by its mother.
Rating:

It's true that the photograph in question really did show a ranger who helped to lift a baby elephant out of a watering hole to safety. It happened in South Africa.

However, the second part of the claim about the mama elephant "thanking" the rescuer came from a completely different story that happened in India. The two stories were conflated and somewhat dramatized in a lengthy slideshow article.

In February 2022, an online advertisement showed a picture of a man lifting a baby elephant out of a watering hole with the caption: "Man Saves Her Baby Then Mama Elephant Does This." This was somewhat true, but also partially false.

This photograph was real. However, the caption was misleading and appeared to partially refer to a different baby elephant rescue. Basically, the ad and resulting multi-page article conflated and somewhat dramatized two real stories.

The picture in the ad showed an incident that happened in South Africa in 2014. It was shot by photographer Corney Coetzee. The man shown saving the baby elephant was a ranger.

According to ReckonTalk.com, "a baby ellie fell into the Gwarrie Pan drinking hole in Addo Elephant National Park and was unable to climb back out." This picture appeared to be captured before the little one fell into the water. (Corney Coetzee/Getty Images)

Wildcard.co.za reported that the elephant herd attempted to help the baby out, but was unsuccessful.

The following three photographs showed the other elephants trying to assist the baby in the dangerous situation: The baby is visible under the elephant with the tusks. (Courtesy: Corney Coetzee/Getty Images) One of the elephants attempted to guide the baby to safety. (Courtesy: Corney Coetzee/Getty Images) However, they weren't able to help the little one out of the watering hole. (Courtesy: Corney Coetzee/Getty Images)

Park rangers quickly brought in large equipment to lift the baby out, but that only agitated the herd. Coetzee, the photographer, described what happened next:

It was time for Plan B: a group of rangers hopped into their bakkie and began to clear the area of the adult elephants, making loud sounds to get the animals moving. When the elephants were finally far enough away for the rangers to commence their rescue mission safely, two jumped from the back of the vehicle and raced towards the struggling baby.

Haste was crucial. Jumping in the water, the rangers used their strength to cradle the baby and push it up towards dry land. More SANParks staff joined to assist from the sides and help the small (but nevertheless heavy) elephant.

Since mother and child could no longer see each other amidst the bushes on the banks of the dam, rangers began devising a plan to reunite the family. They loaded the baby onto the bakkie and drove it closer to its protective and worried mother.

The ordeal lasted for around three hours. Mother and baby. (This picture, also shot by Coetzee, might be from before the incident occurred.)

Nowhere in any versions of the story was it mentioned that the mama elephant "thanked" the rangers for their kindness, as claimed by the ad.

Meanwhile, any readers who clicked the ad were led to a somewhat dramatized story about a completely different baby elephant rescue that occurred in India.

On Nov. 23, 2017, a baby elephant fell into a well in Thattekad, which is located in the Indian state of Kerala. As UPI reported, rescuers were recorded on video the next day during the effort to save the baby:

Forest officials brought an excavator to the well and the video shows the construction vehicle digging out the well to create a ramp for the trapped elephant.

The calf is eventually freed from its hole after five hours of rescue efforts and runs to rejoin its herd nearby.

The elephant's mother, once reunited with her baby, turns toward the rescuers and raises her trunk in a gesture locals identified as a thankful salute.

The video was made available by Nat Geo WILD on YouTube:

Its trumpeting woke up the villagers early in the morning. The distressed mother and the rest of the herd stood nearby the well as a rescue team began to excavate around the trapped calf. Once free, the elephant ran to its mother. Before running off into the forest, the mother turned toward the people and raised its trunk. In India, some believe that this is a thankful gesture of an elephant. Elephant expert Joyce Poole says this gesture is known as "periscope sniffing," a common posture most often seen when an elephant is assessing a possible threatening situation.

In sum, "man saves her baby" was true in both cases of the elephant rescues. However, it was misleading for the two stories to be conflated into one tale.