Man Dies During Sex While Attached to Prostitute?

Dubious reports hold that a Chinese man expired during sex and had to be taken to the hospital to be surgically separated from prostitute who was still attached to him. 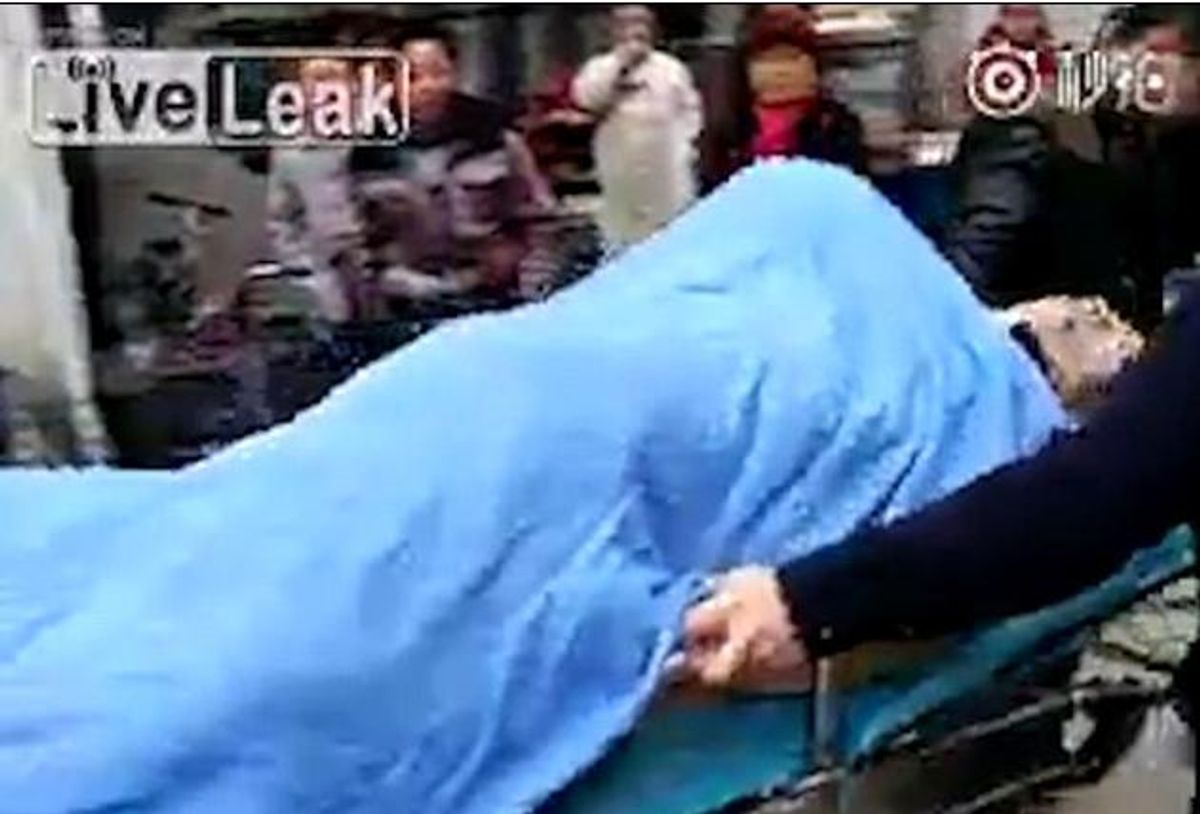 Claim:
A man who expired during sex was taken to the hospital to be surgically separated from the prostitute who was still attached to him.
Rating:

On 4 February 2016, the UK's Daily Mail ran an article about short video posted to LiveLeak that purportedly paramedics wheeling away a gurney holding a Chinese man who had died during sex, as well as a prostitute who was still "attached" to the deceased due to a case of penis captivus:

A disturbing video purporting to show a prostitute still attached at the genitals to an elderly man who died while having sex has emerged online.

The pair are hidden under a blanket, but the woman does seem to be moving, as a crowd of people stand around and watch in horror.

The video appears to have first emerged on Chinese video sharing website Miaopai, before it was later shared by users on LiveLeak.

It is believed that the incident took place in China, although the exact location is unknown.

The duo were presumably taken to the hospital to be surgically separated before the man could then be brought to the morgue.

People are able to get stuck together while having intercourse — a rare occurrence known as 'penis captivus', where the vagina muscles clamp down on the penis much more firmly than usual.

The literal truthfulness of this sketchy report is highly questionable. The video in question is only several seconds long and merely shows an unidentified man (suffering from an unknown medical condition in an indeterminate location) being wheeled away in a gurney, with everything but his head and feet covered by a blanket. It appears that someone (or something) could be atop the man underneath the blanket, but for all we know that person (if it is indeed a person) could be a grieving wife who refused to be separated from her husband after he suffered a stroke or heart attack (unrelated to sexual activity). It isn't even clear that the man in the video is in fact dead (in which case one would usually expect that the deceased's head would be concealed by the blanket as well, but here it was left exposed as if the patient still needed to breathe).

Adding to the doubtfulness of the story is the largely legendary status of the so-called penis captivus medical phenomenon, and the Daily Mail's penchant for falling for fantastically fictional news stories from China, including false reports of a man whose body became riddled with tapeworms due to his consumption of sashimi, a man who sued his wife for bearing him ugly children, and female students eating roundworm eggs to ensure they looked thin for job interviews.