Did Valerie Jarrett Say She Wants to 'Help Change America to Be a More Islamic Country'?

A spurious quote attributed to White House adviser Valerie Jarrett was supposedly spoken during her time as an undergraduate at Stanford University. 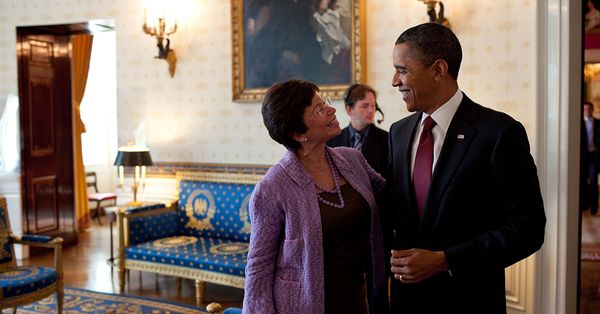 Image Via By The White House from Washington, DC / Wikimedia Commons

Valerie Jarrett was offered a role as a White House Senior Advisor at the very beginning of the Obama administration in January 2009 and held the position of Senior Advisor to the President of the United States. President Obama said he consulted Jarrett on every major decision, and the New Republic's Noam Scheiber reported thus of her influence with the White House:

"Her role since she has been at the White House is one of the broadest and most expansive roles that I think has ever existed in the West Wing," says Anita Dunn, Obama's former communications director. Broader, even, than the role of running the West Wing. This summer, the call to send Attorney General Eric Holder on a risky visit to Ferguson, Missouri, was made by exactly three people: Holder himself, the president, and Jarrett, who were vacationing together on Martha's Vineyard. When I asked Holder if Denis McDonough, the chief of staff, was part of the conversation, he thought for a moment and said, "He was not there."

Jarrett holds a key vote on Cabinet picks (she opposed Larry Summers at Treasury and was among the first Obama aides to come around on Hillary Clinton at State) and has an outsize say on ambassadorships and judgeships. She helps determine who gets invited to the First Lady's Box for the State of the Union, who attends state dinners and bill-signing ceremonies, and who sits where at any of the above

The level of influence Jarrett held with the Obama administration prompted many detractors to complain she wielded too much control over the President and decisions about who should have access to him, and one expression that detraction commonly took was the assertion that Jarrett was a foreign-born Islamic "mole" who was pushing for (or furthering) a Muslim agenda through the executive branch.

One quote attributed to Jarrett is a typical example, holding that while she was an undergraduate psychology student at Stanford University in 1977, she proclaimed herself to be an Iranian who sought "to help change America to be a more Islamic country" and she felt "like it is going well in the transition of using freedom of religion in America against itself": Contrary to common rumor, however, neither Jarrett nor her parents are Iranian, nor (as far as we can tell) are any of them Muslim. Jarrett's parents, James E. Bowman and Barbara Taylor Bowman, were both American-born U.S. citizens from Washington, D.C. and Chicago, respectively; the couple merely lived in Iran for about six years in the late 1950s and early 1960s while James served as chair of pathology at Nemazee Hospital in Shiraz as part of a program that sent American physicians to work in developing countries.

Valerie was born in Shiraz during the Bowmans' sojourn in Iran; she returned to the U.S. with her parents in 1962 (when she was five years old), whereupon she attended prep school in Massachusetts, graduated with a B.A. in psychology from Stanford University in 1978, and earned a J.D. from the University of Michigan Law School in 1981 before returning to Chicago to begin her working career. We've found no evidence Valerie Jarrett is (or ever was) Muslim, her only apparent connection to that religion being the incidental one that she temporarily lived in a predominantly Muslim country with her American parents for the first few years of her life.

The quote to attributed "Valerie Jarrett, Stanford University, 1977" about her "seek[ing] to help change America to be a more Islamic country" is an unfounded one that has no source other than recent repetition (primarily on right-wing web sites and blogs). It's also an anachronism, as "Valerie Jarrett" didn't exist in 1977: she was born Valerie Bowman and didn't take the latter surname until she married William Jarrett in 1983.

Moreover, the wording of the meme in its commonly reproduced form was too stilted to be believable as the utterance of a fluent English speaker (e.g., "I am an Iranian by birth and of [sic] my Islamic faith"). Finally, no news article or document associated with Stanford University records Jarrett as having made this statement back in 1977; and if there were any credible evidence Jarrett had ever said anything remotely like this, it would have been a well-covered news story since shortly after the 2008 presidential election and not a obscure meme that didn't pop up until several years later.