If you're submitting a ballot by mail, you might need additional postage (and the directions printed on the envelope might be incorrect). 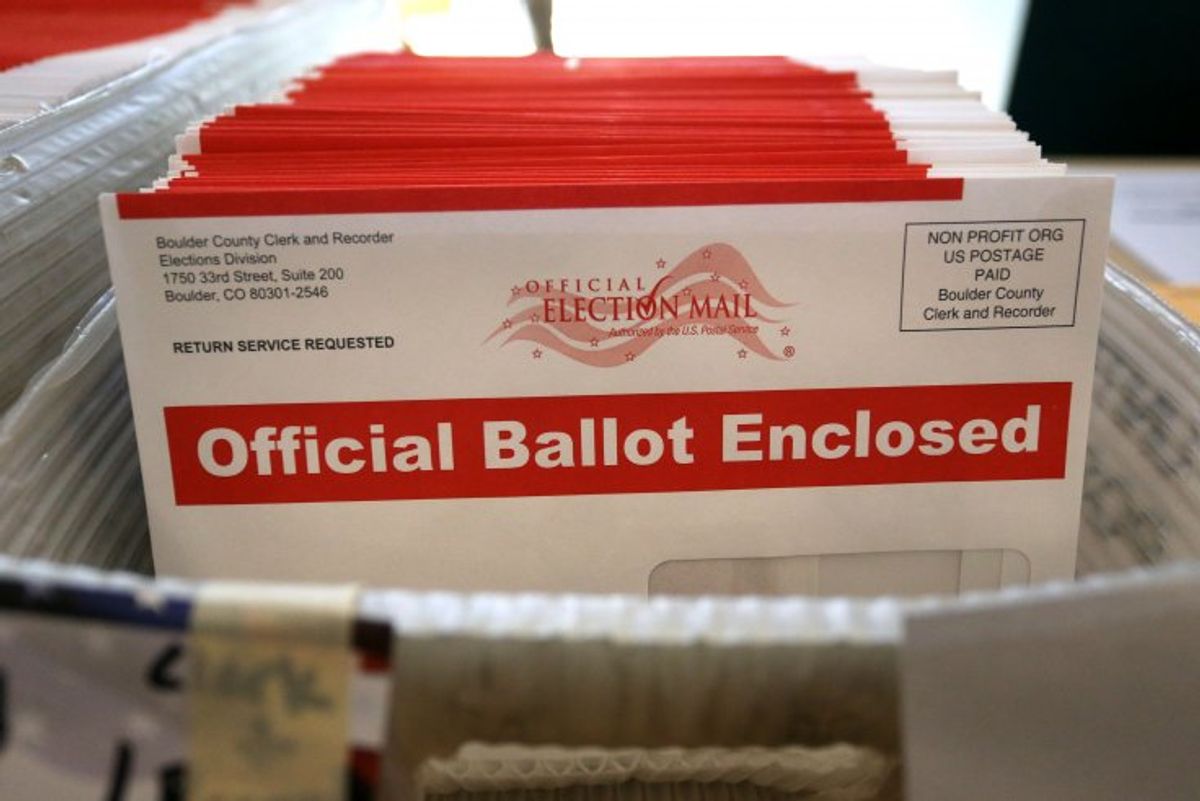 Claim:
Mail-in ballots require additional stamps and will not be counted if affixed postage is insufficient.
Rating:

Some mail-in ballots require additional postage, and some election boards have had difficulty communicating the circumstance due to variations between jurisdictions.

The additional postage requirement is not universal for all mail-in ballots in every state, and ballots lacking proper postage may or may not be counted.

Early voters taking advantage of vote-by-mail provisions (where available) began sending in their general election ballots in October 2016, and social media rumors began circulating holding that mailed ballots were subject to being invalidated or returned to sender due to insufficient postage.

Confusion among mail voters was rife, and a contributing factor to that confusion was inconsistency of ballot size and postage requirements across states, counties, and even towns:

Mail voter reminder: Due to the weight of the 2-page ballot, 67 cents postage is required to return your ballot. https://t.co/yE5Q6ARvHX pic.twitter.com/Ru23qjdO9q

Some of the ambiguity was driven by a widely-circulated article from San Diego station KMFB titled simply "Many voters don't know you need two stamps for mail-in ballots," an article that didn't inform readers which voters that information applied to:

If you are sending in a mail-in ballot, you will need an additional 20 cents. The ballot is two pages, which means it will cost a total of 67 cents to mail it back, not the standard 47 cents.

An embedded video revealed that the reporting pertained only to voters San Diego County, not necessarily to voters in other California counties or elsewhere in the U.S., and that votes with insufficient postage would still be counted.

With 22 days to go until Election Day, many voters across Franklin County are mailing in and casting their votes early. But a mistake made by the county’s Board of Elections has some wondering if their absentee ballots will make it to the election office at all.

“When we sent out instructions to about 58,000 folks that have requested the absentee ballots, the instructions indicated $.47 was required to send back the ballot to the Franklin County Board of Elections, but in reality it was $.68 that was required as to where anybody that has two sheets of paper in their ballots,” said David Payne, Deputy Director of the Franklin County Board of Elections.

In that instance, too, elections officials stressed that insufficient postage would not prevent the counting of any votes:

“We immediately got with the U.S. Post Office, the senior officials there. and they indicated to us that all of the ballots will be returned to the Franklin County Board of Elections regardless the amount of postage that was on there,” said Payne.

Voters in California's San Joaquin County were also advised that their lengthy ballots would need additional postage but would be delivered regardless. Cincinnati station WCPO reported on ballot postage confusion in Ohio due to the fact that ballot sizes (and therefore postage requirements) vary from county to county, even though all use the same outer mailing envelope:

For the third year in a row, Ohio absentee voters are not sure how many stamps to place on the oversized absentee ballot.

It just says "Affix First Class Postage," which Tammy Wirkamp said is not very helpful. "It's very confusing," she said.

And in a year when there is so much concern about possible election fraud and missed votes, inconsistencies over postage is dumb. Really, really dumb ... [We] checked with the Hamilton County Board of Elections, and learned a surprising fact: the outside envelope does not say how many stamps you need because it varies from county to county, and even from own to town within a single county.

Many voters were of the belief postage ought not be required for submission of ballots by mail:

Absentee Ballot isn't postage paid? For all the things my taxes pay for and I wish they didn't THEY COULD AT LEAST FRONT ME A STAMP — ?Rain? (@rainspirit11) October 19, 2016

Absentee ballot came today. I have to put postage on it?! That seems...unreasonable.

In March 2016, an uptick in voting by mail led to new USPS guidelines (not rules) for best practices with respect to election mailings, and that guidance [PDF] advised officials of an increase in returned ballots and suggested they make arrangements with Postal Service officials to handle ballots lacking proper postage:

Not all voters can get to the polling place on Election Day. An absentee ballot is the printed ballot marked by an absent voter, sealed in a special envelope, and given or mailed to the municipal clerk. The number of ballots mailed back to election officials with insufficient postage is on the rise. Each election cycle presents a different set of parameters for ballot creation and for the size and weight of the return mailpiece.

The Bipartisan Policy Center reiterated USPS' stance on ballots with insufficient postage, but those recommendations are not binding [PDF]:

The USPS says that ballots should never be returned to the voter for lacking postage; they should always be delivered to the election official.

Depending on the jurisdiction, mailed-in ballots may require more than a single first-class postage stamp, and ballots lacking proper postage may or may not be delivered to election officials for counting. Voters unsure of postage requirements for their mail-in ballots should check with their local election board or post office to ensure proper delivery.

Beginning in 2019, all California vote-by-mail ballots became prepaid, with voters no longer needing to apply their own postage. California Assembly Bill No. 216 was signed into law by Governor Jerry Brown on 18 July 2018, amending Section 3010 of the state's Elections Code.