Was an Indiana Woman Arrested for Pre-Marking Ballots in 2020?

While both are election crimes, there is a difference between modifying mail-in ballots and modifying applications for ballots. 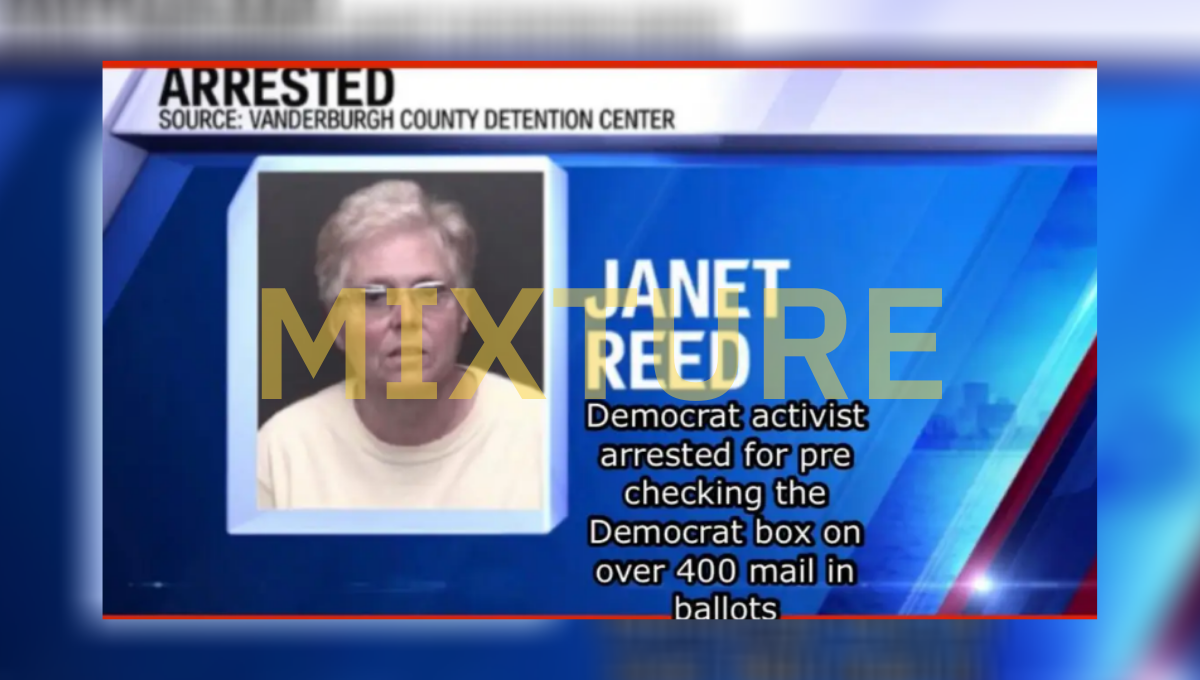 Claim:
Janet Reed, a Democratic activist in Indiana, was arrested in 2020 on suspicion of selecting Democratic candidates on more than 400 mail-in ballots.
Rating:

Janet Reed of Indiana is a member of the Vanderburgh County Democratic Party's precinct committee. She was arrested on suspicion of partially filling out applications for ballots in the state's June 2020 primary election such that voters who used them would have no option but to participate in the state's Democratic primary. Election officials said they caught the modification and reissued new applications to impacted voters.

In the months before the 2020 November election, supporters of U.S. President Donald Trump circulated a meme online that alleged an Indiana woman had been arrested on suspicion of filling out more than 400 mail-in ballots for candidates of her choice — all Democrats.

Around the same time, Trump had made several unsubstantiated attacks on the legitimacy of vote-by-mail systems in his race against Democratic rival and former Vice President Joe Biden. The viral meme shown above appeared to be an attempt to provide evidence of the polling method's susceptibility to fraud, including a mugshot of the alleged offender and the claim:

More than 400 Facebook accounts had shared a version of the image (see below) as of this writing, including a user who added the commentary: "These illegal things by the Left/Democrats will continue after the election too." To investigate the accuracy of the viral rumor, we deemed its underlying claim to be this: Janet Reed, a Democratic activist in Indiana, was arrested in 2020 on suspicion of preselecting Democratic candidates on more than 400 mail-in ballots.

We uncovered legal filings in Vanderburgh Circuit Court that confirmed, yes, a woman named Janet Reed of Evansville, Indiana, faced a felony election fraud charge in a case that was filed on April 15, 2020.

Next, we contacted the Vanderburgh County Sheriff's Office to learn the circumstances that led to Reed's arrest. Major Chad Ferguson sent us a copy of the affidavit of probable cause, which is a court document that outlines officers' rationale for arresting suspects and is often the basis of prosecutors' arguments for charging them. The document, which included information from the Vanderburgh County Election Board, stated:

In other words, Reed was arrested on suspicion of manipulating hundreds of applications for ballots — not actual ballots for selecting specific candidates on Election Day — to vote in the state's June 2020 primary elections. Untainted applications (as shown below) gave registered voters the option of identifying as a Democrat or Republican, or only voting on nonpartisan ballot measures, in the primaries.

According to the affidavit, Reed had illegally used a yellow highlighting pen to preselect the "Democratic Party" option on about 300 applications that would have signed up recipients for the state's Democratic primary on June 2, 2020, without their consent.

But per investigators, the tainted applications were returned to the Vanderburgh County Election Office and were deemed invalid. The affidavit did not make clear under what circumstances recipients returned the ballots, nor how many voters noticed the infraction right away. At least a portion of recipients tried submitting the invalid applications for ballots, but election officials said they were aware of Reed's alleged actions by that time and reissued those voters new applications to complete. The document stated:

As of Friday, May 1, 2020, more than three hundred (300) partially completed applications had been returned to the election office.

As a result of Ms. Reed`s actions the Vanderburgh County Election Office was required to notify all of the voters who returned an invalid application and supply each of them with a proper and lawful application.

That meant the roughly 300 voters who returned the manipulated paperwork to elections officials were able to select either the Democratic or Republican party, or neither, on new applications for primary ballots, according to officials.

Additionally, the affidavit said election officials and the chair of the county's Democratic Party, Edie Hardcastle confronted Reed about her fraudulent activity in spring 2020 and demanded her to immediately stop sending applications. She didn't, the document alleged, and she also did not cooperate with detectives' investigation into the case.

Per the court records, prosecutors charged Reed with a Level 6 felony. Ultimately, they believed Reed violated Indiana's law governing ballot applications, which are statutes that not only pertain to mail-in voting systems but rather all methods of voting. Reed's next court hearing was scheduled for October 8, 2020, as of this report.

Prosecutor Nick Hermann, a former local Republican Party chairman, declined an interview with us for this report.

So to recap, Vanderburgh County law enforcement and elections officials believed Reed had partially completed ballot applications for about 300 eligible voters as part of an illegal scheme to drive up turnout in the state's Democratic primary election, which is where party voters narrowed crowded races to one leading candidate.

Next, we sought any evidence to prove or disprove that Reed was a "Democratic activist" or that she had volunteered in any way to promote the party's causes or candidates. In an email to Snopes, Hardcastle said:

It is our understanding that while Janet Reed was volunteering with a campaign during the 2020 Primary election, she mailed absentee APPLICATIONS to several hundred voters in Vanderburgh County. She did WITHOUT approaching the Vanderburgh County Democratic Party for guidance on following proper procedure. ...

While Reed does still hold the position of a Precinct Committeeperson, her status is currently under review pending the outcome of the case currently in court.

Furthermore, Hardcastle told Evansville's local newspaper The Courier & Press that Reed had worked for the campaign of Thomasina Marsili, a Democratic newcomer who won the primary and was running against Republican Rep. Larry Bucshon to represent Indiana's 8th Congressional District as of this writing. Marsili told the newspaper that Reed was "not an employee" but the candidate did not respond to questions to clarify if Reed was volunteering for the campaign.

In sum, it is accurate to claim that Reed, who is a member of her county's Democratic Party's precinct committee, was arrested in 2020 on suspicion of partially filling out about 300 ballot applications that would have signed up recipients for the state's Democratic primary without their consent. However, elections officials say they caught the error and reissued impacted voters new applications to request ballots for the political party of their choosing or to abstain from voting in partisan primary races. Additionally, it is false to assert she faced a criminal charge for allegedly preselecting Democratic candidates on numerous residents' ballots. For those reasons, we rate this claim a "Mixture" of truth and falsehood.