The USPS does recommend requesting ballots at least 15 days in advance and mailing them at least a week before the election. 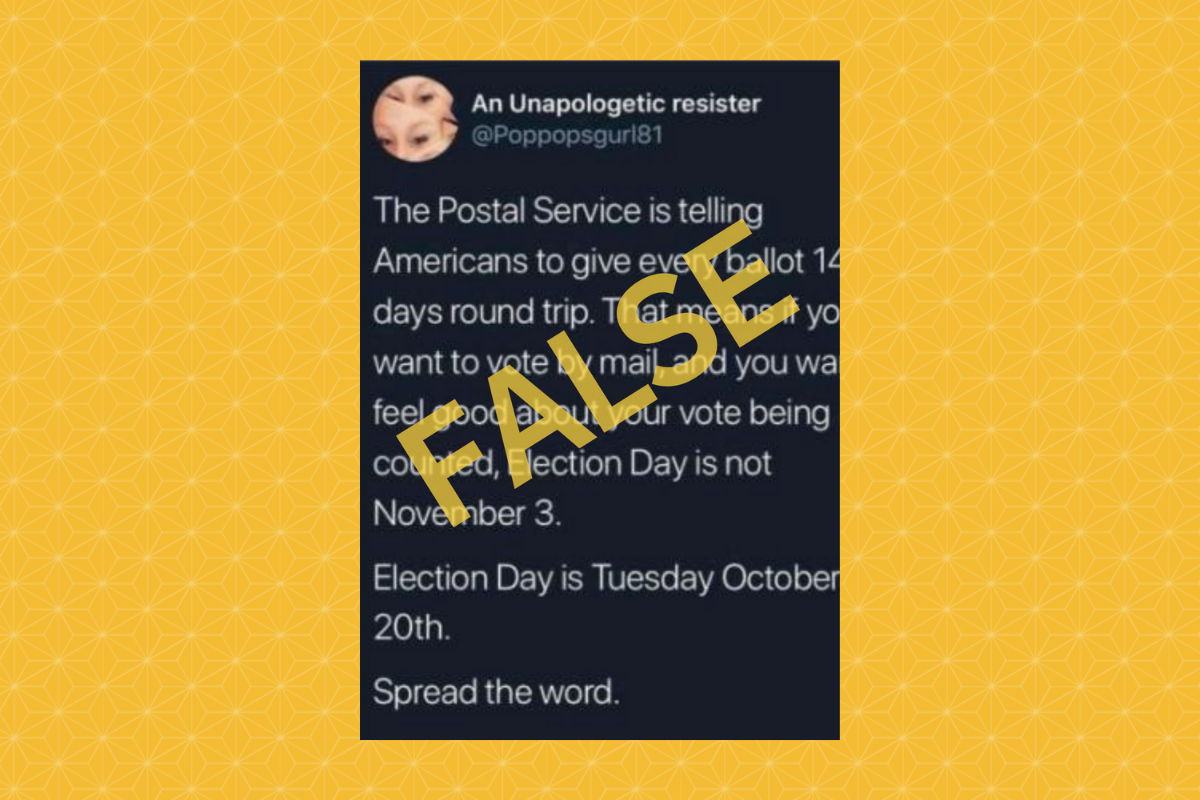 In late July 2020, Snopes readers asked for verification of claims made in viral social media posts that stated the U.S. Postal Service (USPS) is advising the public that those who plan to cast a mail-in ballot in the Nov. 3, 2020, general election should get ballots in the mail 14 days in advance. Above is a screenshot of the post being widely shared.

It's true that USPS is recommending voters who plan to vote by mail get their ballots in transit well before Election Day, but voters have a bit more time to do so than the above post suggests.

In a statement, the USPS noted that voters should request ballots no less than 15 days in advance, and notes that most voters can mail them a week in advance of Election Day.

Below is a statement sent to us by the Post Office, with the relevant portions in bold:

The United States Postal Service is fully committed to fulfilling our role in the electoral process when public policy makers choose to utilize us as a part of their election system, and to delivering Election Mail in a timely manner consistent with our operational standards. We do ask election officials and voters to be mindful of the time that it takes for us to transport, process and deliver ballots from the election mail officials to the voters, the time that it takes for voters to consider and prepare their ballots, and the time that it takes for a ballot to be transported, processed, and delivered back to the election official after it is placed by the voter back into the mail stream, based upon our usual delivery standards which have not changed.

For that reason, we recommend that customers who opt to vote through the U.S. Mail must understand their local jurisdiction’s requirements for timely submission of absentee ballots, including postmarking requirements. Voters must use First-Class Mail or an expedited level of service to return their completed ballots. In order to allow sufficient time for voters to receive, complete and return ballots via the mail, and to facilitate timely receipt of completed ballots by election officials, we strongly recommend that jurisdictions immediately communicate and advise voters to request ballots at the earliest point allowable but no later than 15 days prior to the election date. The Postal Service recommends that domestic, non-military voters mail their completed ballots back to the election officials at least one week prior to their state’s due date. The Postal Service also recommends that voters contact local election officials for information about deadlines.

It's important that voters are aware of the rules that govern deadlines in their jurisdictions. As Washington, D.C.'s, news station WUSA9 reports:

Now the note about deadlines is important. States have different rules for when mail-in ballots need to be received in order for them to count. Vote.org shows some states set their deadlines for election day, while other states say a mail-in ballot must be postmarked by election day and received within a few days of election day.

We rate this claim "False," because while the USPS does recommend that voters who are voting by mail send ballots in early — meaning at least one week before Election Day — it does not instruct voters to send ballots in a two full weeks prior. Voters should check resources such as Vote.org to determine the date of their state's deadline for receiving ballots.