A viral Facebook post claimed a customer found live maggots inside a jar of Bertolli sauce, but maggots can't survive the canning process. 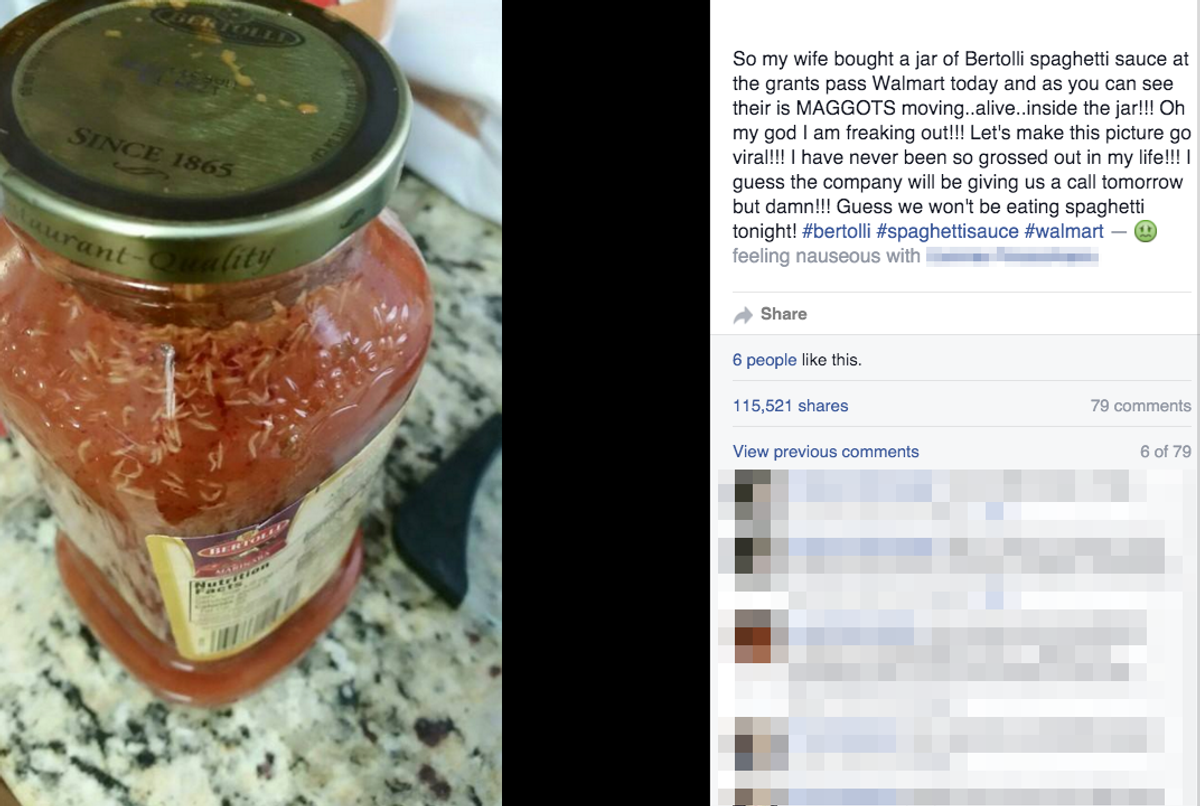 Maggots can be introduced to any jarred food or substance if the seal is broken after manufacturing.

Maggots can survive the canning process and live inside a sealed jar of sauce (or any other substance).

Whether the jar depicted was compromised post-canning, at the store, or in a home environment.

On 28 April 2015, a Facebook user published the above-reproduced image and comment, claiming he and his wife found clearly live maggots inside a new jar of Bertolli spaghetti sauce they had bought at a Walmart in Grants Pass, Oregon.

On 5 May 2015, the same individual published a second, similar claim. This time, the brand in question was Prego, and the content was a video demonstrating what appeared to be identical contamination found on the shelves of the same Walmart:

Returned to the scene of the 'maggot sauce' incident 6 days later and just for the hell of it I looked at the Spaghetti sauces..Unbelievable!! Figure it out Walmart!! #walmart #moldysauce #qualitycontrol Grants Pass Walmart

Posted by Gene Finocchiaro on Tuesday, May 5, 2015

On 29 April 2015, the claim was republished by Oregon news outlet KTVL, but it offered no information regarding whether they'd personally investigated the claim before sharing it, nor did it link to an article or video content with further information.

Scientifically, the notion that maggots could survive the canning process and go on to live in a sealed jar is (at the very least) suspect. Accepted safe temperatures in canning range between 240 and 250 degrees, a temperature well over the necessary level of heat to kill maggots and other forms of larvae.

An entomologist commented on a similar claim of maggots in tomato cans or jars:

Garry McDonald, an entomologist from Melbourne University, said it was "highly unusual" for a maggot to be found living in processed food, like a jar of tomato paste.

"It's a pretty acidic, hostile environment ... It is unlikely to have been a maggot originating from within that bottle, unless it had been previously opened ... The average life of a maggot - from egg hatch to developing into a pupa - might take two or three weeks. It could be a bit less, or a bit more. It's not all that long.

"If the maggot was alive, the egg would have had to have been laid in the last two or three weeks."

It's extremely unlikely that maggots can survive the canning process, not to mention subsequent life in an acidic environment (such as tomato sauce, paste, or similar products). Occasionally, contamination occurs after jars are sealed, resulting in a "popped" lid. The photographs and videos in question appeared to depict unsealed jars of Bertolli and Prego sauce, and it was unclear at which point the purported contamination occurred.