Does This Video Show a Man Ripping the MAGA Hat Off a Trump Supporter?

A YouTuber’s staged video has been taken seriously by several media outlets despite some telling signs of pranksterism. 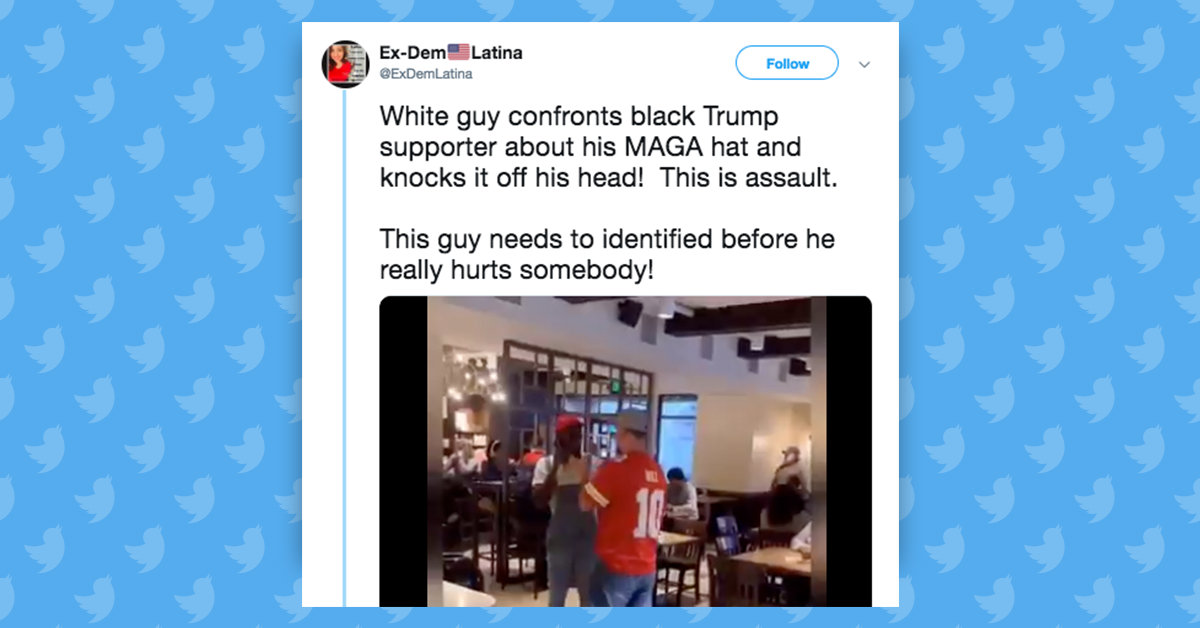 Claim:
A video shows a white man ripping the “MAGA” hat off the head of a black Trump supporter in a Starbucks.
Rating:

On 25 October 2018, the Instagram account “funny__marco_” shared a video that purported to show an altercation in a Starbucks between a black man wearing a Make America Great Again (MAGA) hat and a white man who ripped it off his head in anger:

The video was captioned, like so many others of its time, with a call for fans to follow a YouTube channel — a channel featuring many other bits of staged, awkward, or humorous confrontations. This similarity lead many (but not enough) people to correctly surmise it was a staged video produced for some sort of comedic value.

Despite those clues, a clipped version of the video was tweeted by a pro-Trump Twitter account called “Ex-Dem Latina,” which was then reported on by Alex Jones’ pro-Trump conspiracy website Infowars, the latter of whom gave the hat-snatcher seen in the video “the biggest douchebag award” in a story titled “Liberal Douchebag Knocks MAGA Hat Off Black Trump Supporter’s Head”: We reached out to “Funny Marco” via his Twitter profile regarding the incident portrayed in the video but have received no response. He has played coy in response to others' questioning the reality of the event captured in the clip.

However, on Funny Marco's Facebook page, several people could be seen poking fun at an image of the Infowars “douchebag award” in a way that indicated a man named Brian, who was connected to Marco’s Facebook presence via a friend of Marco’s, portrayed the white man featured in the video. In a brief Facebook chat, Brian (who told us that Marco is a friend of a friend) confirmed that the video was staged:

It is indeed a staged act and this is blowing way way over what I thought it was going to be. I am the one in the video. It was just a skit/joke. It was in bad taste. and I apologize to whoever it caused any issues with. It's a youtuber/comedian’s page and we just did a reverse role play type thing. I didn’t know it was going to cause all of this ... I wish people would realize it.

Outlets promoting this video as evidence of overheated political tensions in the United States are actually just promoting the career of a budding social media comedian.