Does This Photo Show a Crowded MAGA Demonstration?

If a picture is worth 1,000 words, who fact-checks the story behind it? 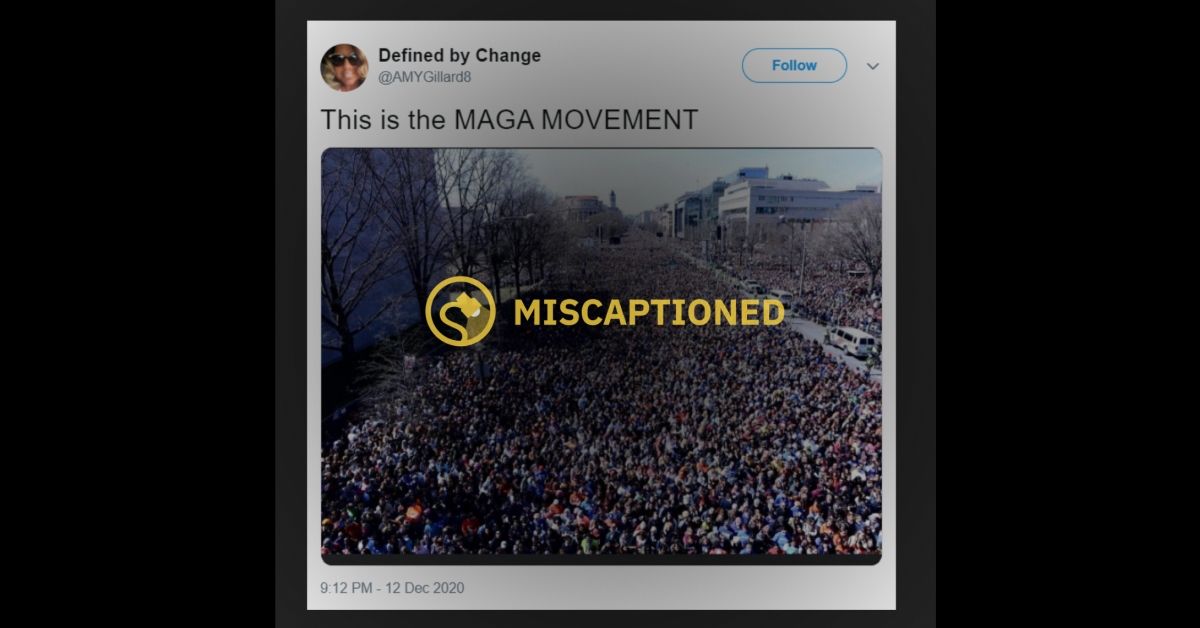 Claim:
An image of protesters packing the streets of the District of Columbia depicted a Make America Great Again (MAGA) demonstration.
Rating:

As thousands of supporters of U.S. President Donald Trump rallied in the District of Columbia as part of the Million MAGA March Freedom Rally held on Dec. 12, 2020, to protest the outcome of the 2020 presidential contest, misinformation about the number of attendees circulated on the internet.

One such claim was an image shared in a tweet by user @AMYGillard8, whose profile identified with Trump and the Make America Great Again movement, and included statements alluding to 2020 election misinformation such as “stop the seal” and “fight like Flynn.” At the time of writing, the tweet had been shared more than 3,000 times. A reverse image search returned at least 65 results, the oldest of which dated back to 2018.

While it is true that the image in question is real, the photograph does not represent a MAGA demonstration. In actuality, the photo was captured by Shannon Finney with Getty Images during the March for Our Lives rally on March 24, 2018, on Pennsylvania Avenue in the District of Columbia. Crowds and celebrities attend the March for Our Lives Rally on March 24, 2018, in the District of Columbia. Shannon Finney/Getty Images

An image taken from a similar viewpoint was taken by photographer David Tulis, and available for purchase at the time of writing on the British stock photography agency website, Alamy.

The March for Our Lives Rally was organized by students in support of legislation to prevent gun violence in the U.S. following the shooting at Marjory Stoneman Douglas High School in Parkland, Florida, on Feb. 14, 2018, in which a gunman opened fire in the high school, killing 17 people and injuring 17 others.

“After the shooting on February 14, we organized the single largest day of protest against gun violence in history. Millions came together to protest our political leaders’ inaction,” wrote the founders on their website.

The nonprofit organization’s “Peace Plan” urges universal background checks on gun sales, raising the federal age of gun ownership and possession to 21, and calls for a ban on the sale of high-capacity magazines and bump stocks in the U.S.

So how many people attended the March for Our Lives rally?

The Virginia-based imaging firm Digital Design & Imaging Service, Inc. estimated 200,000 people attended the demonstration in Washington, D.C. However, the event organizers put the total number of attendees closer to 800,000, making it among the largest single-day demonstrations in U.S. history. Outside of the nation’s capital, more than 880 related events occurred around the globe. Supporters of U.S. President Donald Trump participate in the Million MAGA March to protest the outcome of the 2020 presidential election, on December 12, 2020, in Washington, DC. Jose Luis Magana/AFP