Americans outraged by Russia's invasion of Ukraine called for a boycott of Lukoil gas stations in the U.S. 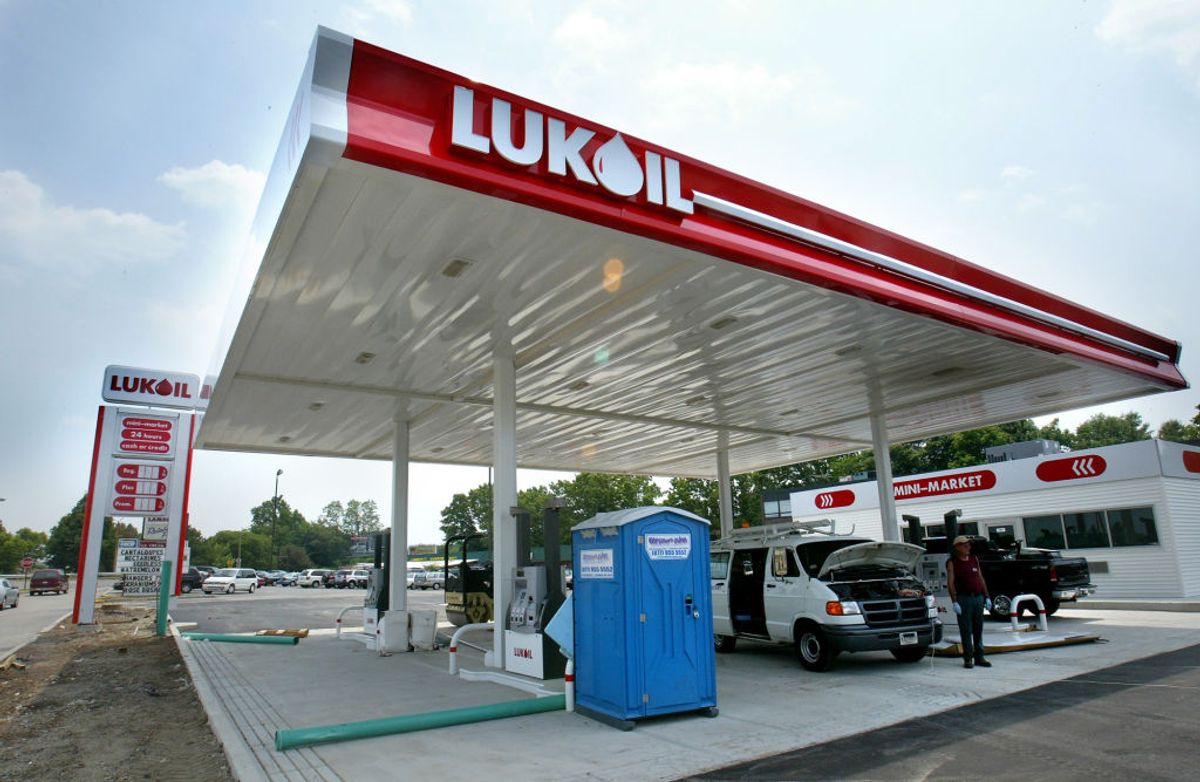 Lukoil is a Russian multinational energy company whose U.S. subsidiary oversees a network of around 230 gas stations, mostly in New Jersey, Pennsylvania and New York. However...

In the U.S., Lukoil gas stations are run on a franchise basis, meaning they are operated by local entrepreneurs and staffed by local workers, meaning they — and not Lukoil bosses in Moscow — would bear the brunt of any boycott action.

During Russia's invasion of Ukraine in early 2022, American social media users enthusiastically shared posts that called for a boycott of Lukoil gas stations on the East Coast, on the basis that they were Russian owned. As one very widely shared tweet summarized: For its part, popular left-wing Facebook page "The Other 98%" wrote:

"Fill your tank elsewhere. Lukoil is a Russian multinational corporation headquartered in Moscow. Their CEO, Vagit Alekperov, is a Russian oligarch worth an estimated $19.6 billion. Lukoil gas stations are all over PA, NJ and NY."

However, Lukoil typically does not operate those U.S. gas stations itself. Rather, it operates on a franchise basis, meaning any successful boycott of Lukoil-branded gas stations would likely have a negligible effect on the parent company or its billionaire president, but could prove financially devastating for dozens of U.S. franchise owners and their hundreds of local employees. In brief, Lukoil itself might be "Russian owned," but its U.S. gas stations are U.S.-operated and locally staffed. As such, we're issuing a rating of "Mixture."

Lukoil in the United States

Lukoil emerged from the dissolving Soviet Union in the early 1990s, and entered the American market a decade later. According to the company's website, Lukoil acquired the American company Getty Oil in 2000, taking over and rebranding its existing network of gas stations.

The first Lukoil-branded gas station was opened in the Chelsea neighborhood of Manhattan in September, 2003. Notably, the grand opening was attended by Putin himself — who was in the U.S. at that time for talks with then-President George W. Bush. In the photograph below, Putin can be seen outside the Manhattan Lukoil, with Alekperov to his right, and U.S. Sen. Chuck Schumer, D-N.Y., to his left: At the time, Lukoil was reported to have taken over Getty's existing network of 1,300 gas stations, but by 2022, the number of Lukoil-branded gas stations in the United States had declined to around 230 — most, if not all, located in New Jersey, Pennsylvania, and New York.

Importantly, most — if not all — of those gas stations are operated as franchises. Franchising is a popular business model in the United States, with the best-known examples being fast food restaurants such as McDonald's and convenience stores like 7-Eleven.

Roughly speaking, the franchisee (local entrepreneur) pays the franchisor (main company) some fees: typically an up-front franchise fee, and regular royalties — usually a percentage cut of their income from sales. In return, the franchisor gives the franchisee the right to operate a business using their well-known brand, for a defined period of time, usually several years. The company might also provide advice or assistance with logistics, advertising, marketing, and so on. The local entrepreneur is also contractually obliged to operate the business in accordance with certain prescribed methods, customer service models, and so on.

Lukoil — or more specifically, Lukoil North America, a Delaware-registered LLC with an address in Moorestown, New Jersey— offers three-year leases to franchisees in New Jersey, Pennsylvania, and New York. In fact, as of March 2, the company's website listed for lease 13 different gas station sites in those states: An "offer to lease" document, posted to the company's website, stipulated some of the standard terms of the franchising agreement:

The aforementioned Bidder is submitting the below rental offer to lease the LUKOIL branded service station listed above, and is prepared to enter into an Agreement with LNA for the lease of the same, subject to the conditions specified below. The lease term is generally three (3) years, however a longer term can be approved, at LNA's discretion, provided a sufficient site improvement or supply commitment is made to justify a longer term. In a Google post on March 2, Lukoil itself attempted to protect its American franchisees from boycotts or other targeting, writing:

"LUKOIL gas stations in the United States are independently owned and operated by local business owners who are members of the communities they serve, and 100% of the gasoline and diesel fuel sold is sourced from American oil refiners."

Snopes asked Lukoil for details on the exact number of Lukoil-branded gas stations in the United States, and the number of those operated on a franchise basis, if not all. We also asked for precise details about the company's revenue from franchise fees, royalties and/or rent paid by U.S. franchisees, but we did not receive a response in time for publication.

However, Lukoil's 2021 financial results, which were published on March 2, gave an indication of the relatively small role of U.S. gas station revenue in the company's overall income, most of which stems from oil and gas exploration and production inside Russia.

Of that $13 billion, just 8.3% ($1 billion) was made up of "refining, marketing and distribution" outside Russia. Although a more detailed breakdown is not available, it is reasonable to suppose that income related specifically to U.S. gas stations made up an even smaller fraction of that $1 billion, given that Lukoil refines, markets, and distributes petroleum in several other countries throughout the world.

It's also not clear whether, in the event of an effective widespread boycott of U.S. Lukoil-branded gas stations, franchisees would still be obliged to continue paying fees and rent to Lukoil North America even if they had no income from gas or convenience store sales.

Therefore, a successful boycott could require financial devastation — if not ruination — among many dozens of local entrepreneurs in the United States, as well as sudden unemployment for their hundreds of workers, in order to achieve what would be only a very small financial impact on the Russian parent company, or its bosses in Moscow.

On March 3, Lukoil's board of directors issued a statement in which they expressed their "deepest concerns about the tragic events in Ukraine," and called for an immediate end to the conflict and a "lasting ceasefire."

Updated [March 4, 2022]: Added reference to the Lukoil board of directors March 3 statement about the Russian invasion of Ukraine.