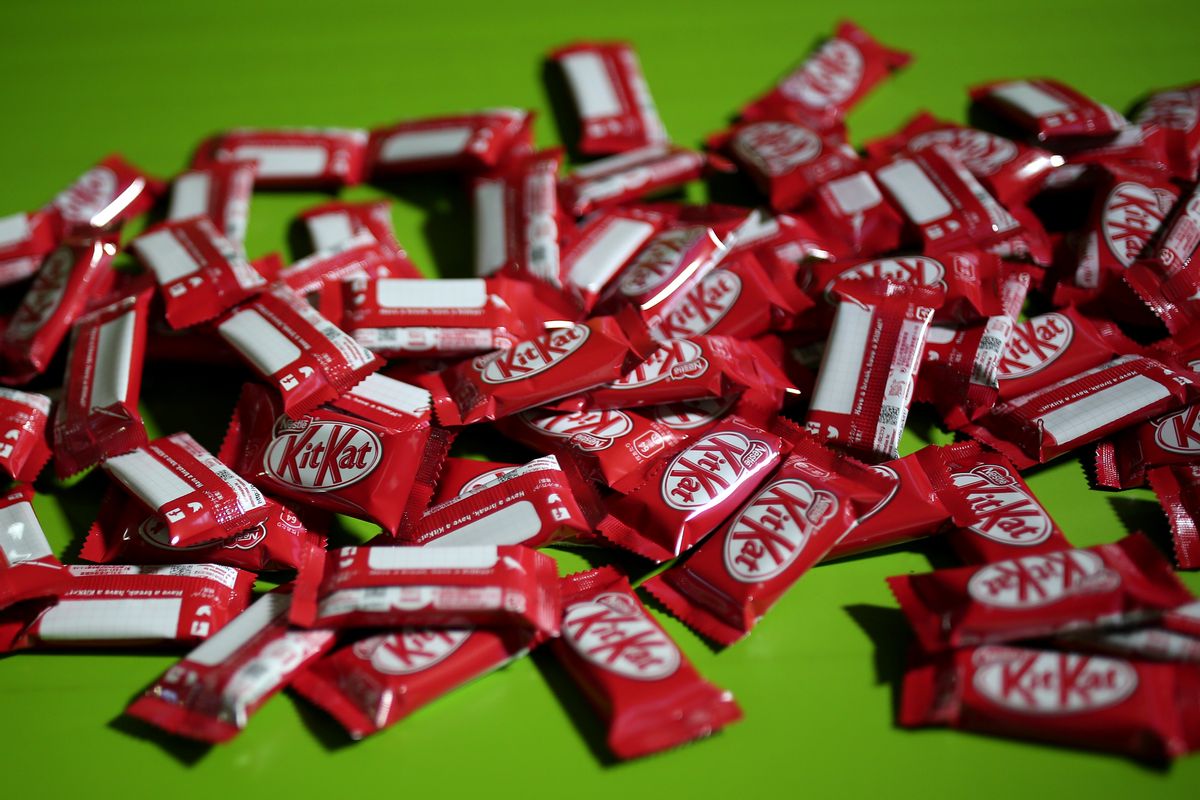 Each year, tens of thousands of senior high school students sit entrance examinations to gain entry to Japan's top state universities. The results of these tests are key to the youngsters' futures, so they study hard in preparation for them. Roughly half of all students in Japan attend special preparation schools (juku) for an hour or two a day in addition to their regular classes, and some even spend a year or two at specialty full-time private schools (yobiko) after completing high school to prepare them for these exams. (Yobiko does not come cheap: a year at one can easily cost as much as, or even more than, a year at university.)

Hard work and diligence on the part of the test takers are augmented by certain foods and charms thought to bring luck and success. One of these talismans is the chocolate bar.

Initially produced by Rowntree as the Chocolate Crisp, (now manufactured by Nestlé) is said to take its name from the famous 1920s club of the same name in London. It is sold around the world in various forms deemed to best fit local markets, but it has come to have an especial place in Japanese culture because of the similarity in pronunciation between the confection's name and a phrase thought to bring luck to those sitting their exams.

Kit Kat is pronounced kitto katto in Japanese, which is very close to kitto katsu, a phrase that translates as "Win without fail." As to how seriously such language charms are taken, it is not uncommon for parents and acquaintances to avoid using certain words around striving students lest they harm the young people's academic chances. Some households even place total bans on such words as "slip" (suberu) and "fall" (ochiru) lest their being loosed in the home attract ill test-taking fortune to the aspiring scholars living there.

Nestlé responded to this fortuitous linguistic association by producing for the Japanese market special bars that carry additional exam-related symbols on their packaging. The cherry blossom design on the wrapper evokes the month of April, which is the height of the cherry blossom season and also the month during which new school years begin and therefore the time of entrance ceremonies that celebrate successful applicants having gained entry to their new institutions of higher learning. The symbol of cherry blossoms in riotous full bloom also connects with doing well on examinations: while sakura saku literally means "the cherry blossom blooms," in Japanese idiom the phrase is used to congratulate someone who has passed his college entrance exam.

However, Kit Kats are far from the only food items thought to bring examination success in the land of the rising sun. When read in Japanese, (a small chewy sweet) sounds like hairerumon, which means "He can get in." The cheese-flavored snack Karu is one letter away from ukaru (to pass an exam).

Test takers may also down breakfasts of one sausage and two eggs to try to improve their chances of scoring one hundred (the food resembles the numbers). Pork cutlets (tonkatsu) are also favored by aspiring scholars because tonkatsu is somewhat close to katsu, the word for "win."

Non-food charms are more of the "refraining from harming one's chances" variety. Mentioned above were prohibitions against using particular words like "slip" and "fall" around students. Those about to take the exam are cautioned against discarding old book bags in favor of new ones lest they unwittingly "leave knowledge behind" in the unwanted Haircuts are also eschewed by test-takers lest tonsorial trimming leach them of luck and knowledge.