Is the Age of Consent Being Lowered to 4?

The age of consent in the U.S. varies by state, ranging between 16 and 18. No one seriously wants to lower that to age 4. 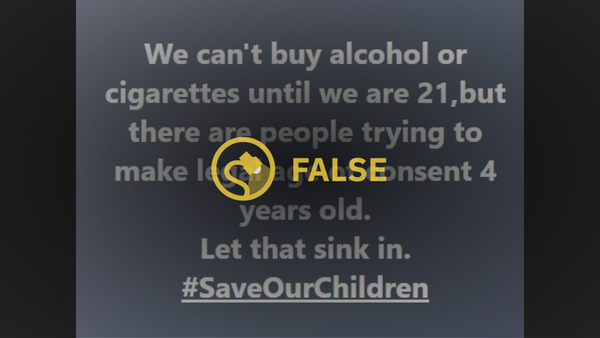 Claim:
An effort is underway to lower the minimum age of consent for sexual activity to age 4.
Rating:

In August 2020, social media users circulated the claim that some "people" were trying to lower the age of consent for sexual activity to the ridiculously young age of four: "We can't buy alcohol or cigarettes until we are 21, but there are people trying to make legal age of consent 4 years old. Let that sink in. #SaveOurChildren."

The posts cited no source, referenced no location, nor identified what "people" were supposedly seeking this radical change in the law. Age of consent is decided on a state-by-state basis in the U.S. and ranges from 16 to 18 years old, and we found no evidence of any serious, concerted, or widespread effort in any state to modify the age of consent to encompass mere toddlers.

Some commenters attempted to associate with claim with California's recently passed and controversial SB 145, but while that law allows certain individuals convicted of sex offenses involving minors to apply for discretionary relief from having to register as sex offenders, it does not in any way affect the age of consent in that state.

The "SaveOurChildren" hashtag used in the example reproduced above was originally created to raise awareness of child sex trafficking, but it has since been "co-opted by followers of QAnon, a sprawling conspiracy theory that pushes the idea that the Trump administration will take down an alleged global ring of pedophiles led by prominent Democrats."