Reports that a lottery winner died after gold-plating his genitals are fake news. 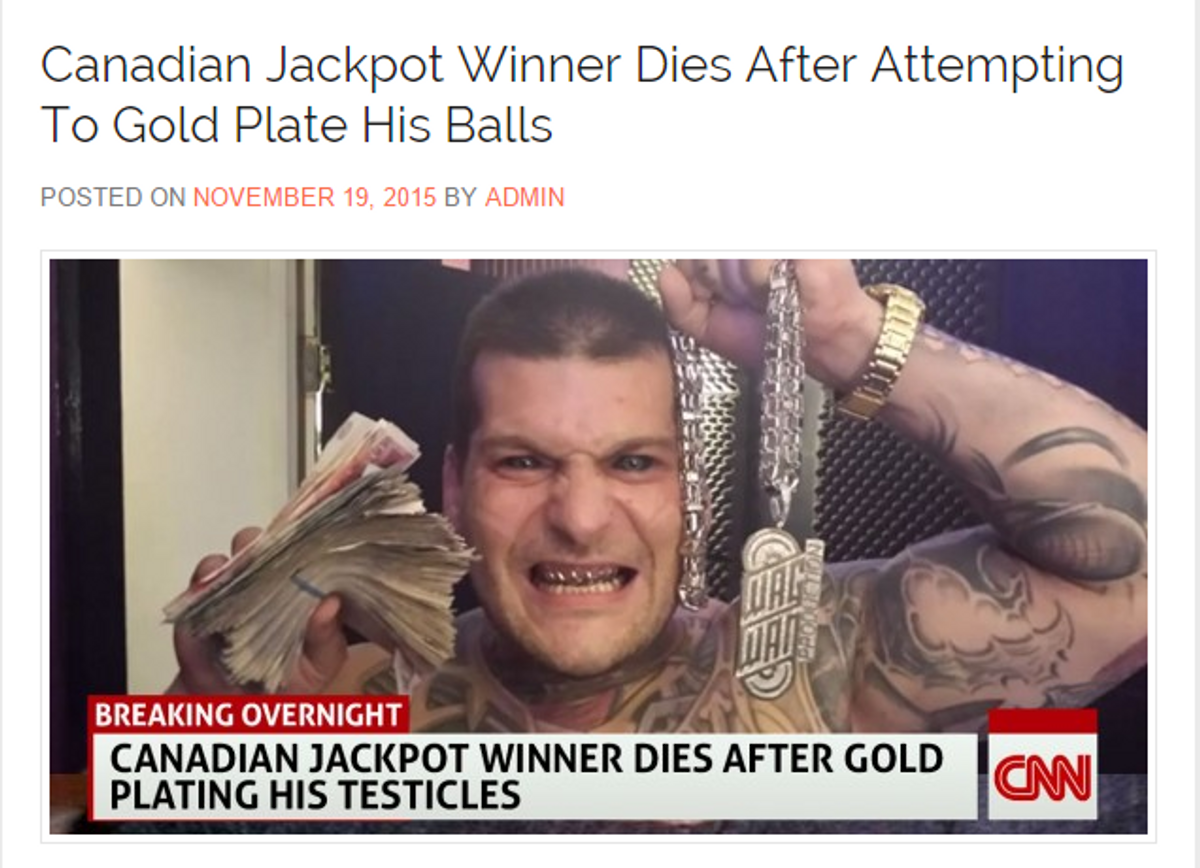 Claim:
A lottery winner died after attempting to gold-plate his testicles.
Rating:

In November 2015, a number of fake news sites, including Now8News, began sharing articles claiming a lottery winner had died after attempting to gold-plate his testicles:

Growing up in a life of poverty, 38-year-old Justin Green saw his hopes and dreams come true when hitting $100 million Georgia lottery last month.  Friends reported that Green immediately quit his job at Walmart and made plans for a “better life.” Apparently, his idea of a better life would not be at the top of the list for most lottery winners. As a young man, Green was obsessed with the 2002 movie comedy Goldmember – an Austin Powers parody of the bond movie Goldfinger in which Powers is hunting a criminal mastermind who colors his victims ‘man parts’ in gold.

According to family members, Green went on a shopping spree which included gold and diamond chains, exotic cars, custom gold and diamond “grills” and ... get this ... gold plated genitals. Green approached many people in the gold plating business, however he was turned down by every store owner – Green was warned this was a very dangerous procedure. Green began painting his genitals with lead-based paint, but quickly decided that a simple coloring wasn’t enough – he needed the real gold. To complete the makeshift operation, Green used a professional automotive gold plater that he borrowed from a garage. Unfortunately in the 12 hours following the procedure, Green encountered a series of health issues that ultimately led to his death.

A 19 November 2015 version that appeared on the web site Viral Covert relocated the hapless lottery winner's residence to Canada:

Justin Reiter from Alberta, Canada, died of medical complications after attempting to gold plate his own genitals to celebrate an astonishing $598,556 jackpot win ... Justin started by painting his genitals with a lead-based paint, but quickly decided that a simple coloring wasn’t enough: he needed to take it to the next level, he needed the real gold. To complete the makeshift operation, Reiter used a professional automotive gold plater that he borrowed from a garage. Unfortunately in the twelve hours following the procedure, Justing encountered a series of health issues that ultimately led to his death.

Both versions featured the same image of a doctor purportedly involved with the fatal incident: Now8News identified the physician depicted as "Dr. William Rife at Emory University Hospital," while Viral Covert claimed the photograph was that of "Dr Ian Joseffson of the Alberta Community Hospital": All of this was just more fake news, however. An image search revealed that the photograph of the doctor was swiped from a 12 May 2012 article about a health scare in Tulsa, in which the physician was correctly identified ias "Dr. Michael Smith [of] St. John Health System ER." Similarly, the purported testicle-gilding lottery winner was in fact Polish rapper Popek: