Did L'Oréal Release a Statement Critiquing the 'Violent' White Race?

The message went viral in June 2020, resulting in the hashtag #boycottloreal. 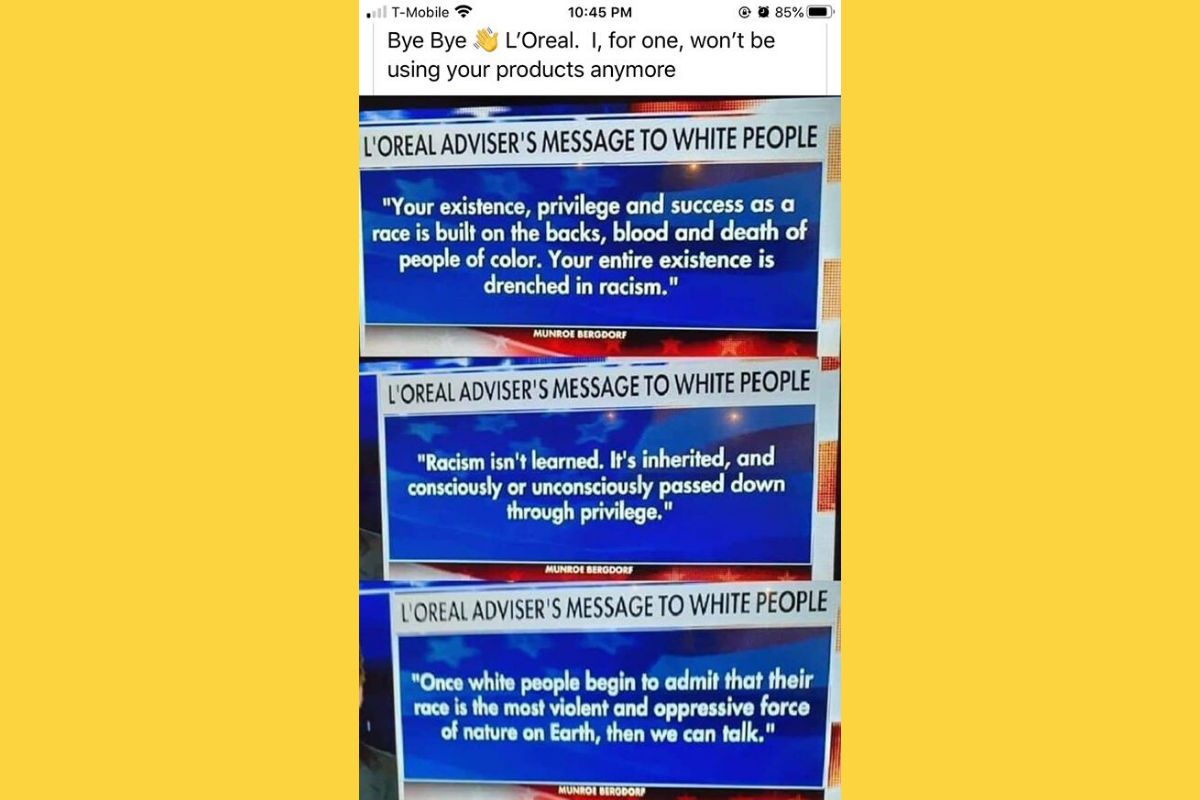 Claim:
L'Oréal Paris' adviser released an inflammatory statement saying white people’s existence was "drenched in racism," and "their race is the most violent and oppressive force on earth."
Rating:

Munroe Bergdorf, a consultant with L'Oréal Paris since June 2020, once wrote these comments back in 2017, when she was briefly signed as a model for their diversity campaign.

However, this was not an official statement from L’Oréal, nor did Bergdorf write these comments while serving as a consultant for L’Oréal.

In June 2020, screenshots from a clip highlighting a L’Oréal Paris adviser’s alleged "message to white people" went viral, prompting the hashtag #boycottloreal to trend after social media users considered the comments to be racist.

The screenshot appeared to spread after L’Oréal hired Munroe Bergdorf, a Black British transgender model, as a consultant on their U.K. Diversity and Inclusion Advisory Board.

Snopes readers also asked us if the following were official statements from L'Oréal: "Your existence, privilege and success as a race is built on the backs, blood and death of people of color. Your entire existence is drenched in racism."

"Racism isn't learned. It's inherited, and consciously or unconsciously passed down through privilege."

"Once white people begin to admit that their race is the most violent and oppressive force of nature on Earth, then we can talk."

But Snopes found no evidence that L’Oréal shared these comments on their social media accounts or any other medium.

The controversy began in August 2017, when Bergdorf was hired with much fanfare as the face of the company’s diversity initiative and its first transgender model in a campaign. But her contract was terminated just days later when the The Daily Mail tabloid published sections of a Facebook post reportedly written by Bergdorf.

Bergdorf said she made the comments as a reaction to the August 2017 white supremacist rally in Charlottesville, Virginia. L’Oréal said Bergdorf's words were at odds with their support of "diversity and tolerance towards all people."

In early June 2020, L’Oréal posted statements supporting Black people in the wake of the May 25, 2020, police-custody death of George Floyd, a Black man in Minneapolis died while being forcibly restrained by a white police officer. Soon after, Bergdorf called the cosmetic company out as hypocrites on her Instagram account, recalling that she was fired three years prior for speaking out against white supremacy.

On June 9, Bergdorf revealed that L’Oréal’s new president, Delphine Viguier had since reached out to her. Viguier expressed regret for how the 2017 controversy was handled, and Bergdorf accepted Viguier’s invitation to be a consultant on their U.K. diversity board.

Select quotes from Bergdorf’s 2017 Facebook post were misrepresented by social media users as official statements from L’Oréal and/or as comments made by her as an adviser to the company. Because Bergdorf admitted to making these comments, but not while as an adviser to L’Oréal, we rate this claim as a "Mixture."

Moodie, Clemmie, and Tingle, Rorie.   "L'Oreal's First Transgender Model is SACKED by the Cosmetics Giant After Claiming 'ALL White People' are Racist in Extraordinary Facebook Rant."    The Daily Mail.   31 August 2017.