Is This an Actual Pic of London Milkman Delivering Milk After WWII Bombing?

"Keep calm and carry on" was the motto of the day. 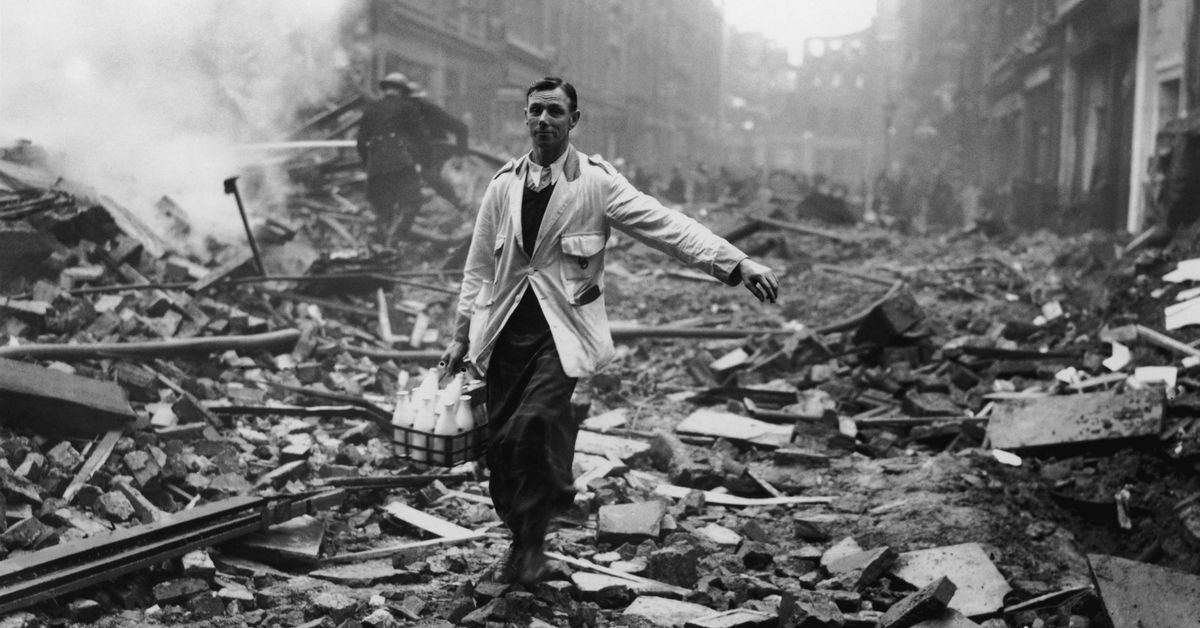 Claim:
A vintage photograph authentically shows a milkman delivering milk in the aftermath of a bomber attack on London during World War II.
Rating:

Although the Oct. 9, 1940, photograph, credited to photographer Fred Morley, is real (in the sense that it was not digitally created or edited), and was indeed taken in the aftermath of a German bombing raid, it was also staged. The "milkman" was actually the photographer's assistant, posing in a borrowed costume amid the real devastation of the London Blitz.

It was an iconic image showing the devastation London sustained during the Blitz, an eight-month aerial bombing campaign carried out by the Nazis during World War II. But the photograph of the so-called "London milkman" navigating the rubble on foot to make milk deliveries was also, despite its frequent use to illustrate the resolute "spirit of the Blitz" ascribed to Londoners of the day, largely a work of fiction staged by the photographer himself.

The picture, which Getty Images dates to Oct. 9, 1940, still turns up regularly on websites and social media accounts devoted to historical photographs:

Although the photograph came to be used as propaganda, that wasn't necessarily the intention of the photographer, Fred Morley of Fox Photos. As the situation is typically explained, Morley wanted to capture the desolation he was witnessing with his own eyes but knew such photographs would likely be considered demoralizing and censored by the government. His solution was to introduce an element of normalcy: a milkman carrying on with his duties. Christopher Howse of The Telegraph wrote:

The Blitz changed life in London. That's obvious. More impressive is how daily life continued. My mother, as a 16-year-old bank clerk, had to find a different way to Lombard Street each morning, when the Underground lines and streets were bombed by night. Now all we worry about are Tube strikes. An image that comes to mind, and to the page, is of the milkman deliberately picking his way over the rubble. The only thing is that, in a way, it was a fake. That was no milkman, it was the assistant of a photographer for Fox Photos, Fred Morley. He borrowed the coat and milk carrier, from a milkman naturally. The firemen damping down the ruins are real enough, and so are the ruins. Morley's thinking was that to circumvent censorship of demoralising pictures of ruined streets, after more than a month of daily bombings, he should present things as an object lesson in the maxim 'Keep calm and carry on.'

As a footnote, the famous slogan "Keep Calm and Carry On," along with the similarly themed "Your Courage, Your Cheerfulness, Your Resolution; Will Bring Us Victory," was coined by the British government in 1939, a little more than a year before the milkman picture was taken.

“The Story behind ‘Keep Calm and Carry On.’” University of London, https://www.london.ac.uk/about-us/history-university-london/story-behind-keep-calm-and-carry. Accessed 4 Oct. 2022.