Were Lobotomies Performed with Ice Picks in the 1950s?

No matter how you slice it, this obsolete form of "psychiatric treatment" was a horror. 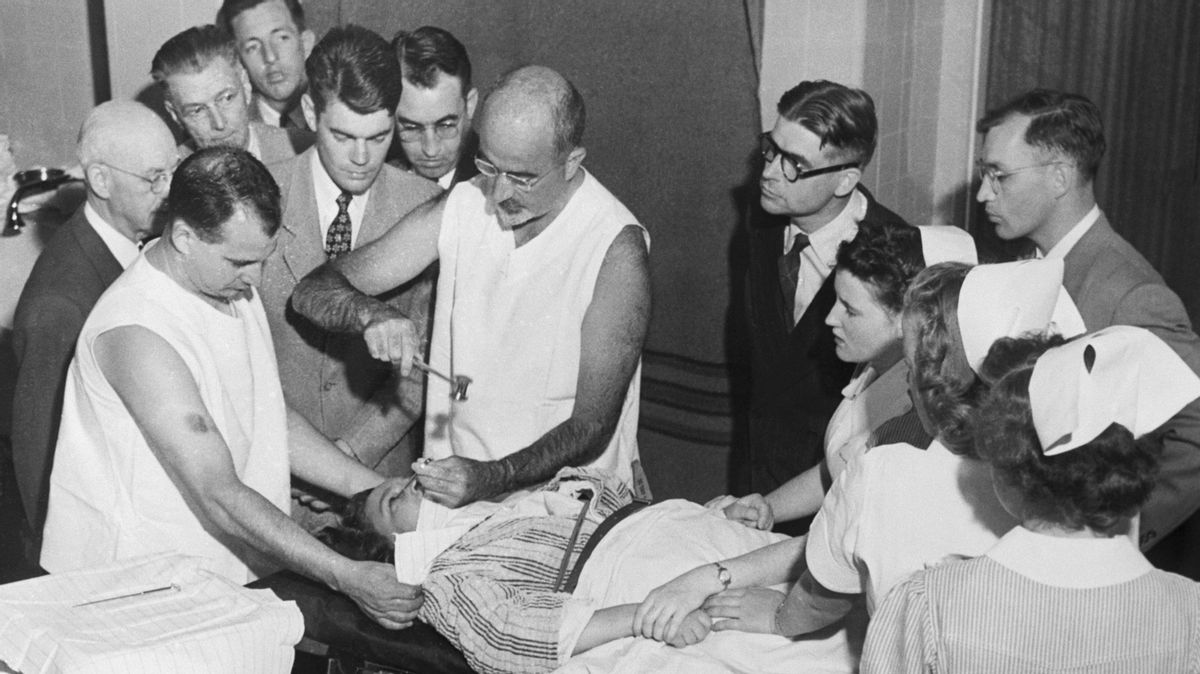 Claim:
In the 1950s, at least 50,000 lobotomies were performed in the United States by hammering an ice pick into patients' brains through their eye sockets.
Rating:

It's true that more than 50,000 lobotomies were performed in the U.S. in the late 1940s and early 1950s by inserting a medical instrument resembling an ice pick through patients' eye sockets and into their brains. In a small number of early experiments, the instrument used was literally a kitchen ice pick. However ...

The vast majority of these transorbital lobotomies, as they were called, were performed with an instrument which, though it resembled an ice pick, was specifically designed and manufactured for this operation.

It's unknown precisely how many of the earliest lobotomies were performed with a literal kitchen ice pick; by one estimate, there were one or two dozen such operations.

There was a time when certain psychiatric conditions (mainly what is now known as schizophrenia) were so impervious to existing forms of treatment that doctors began experimenting with a type of brain surgery, ultimately dubbed "lobotomy," as a last resort. According to an old medical urban legend, during the 1950s these surgeries were performed by literally hammering an ice pick into patient brains through their eye sockets: 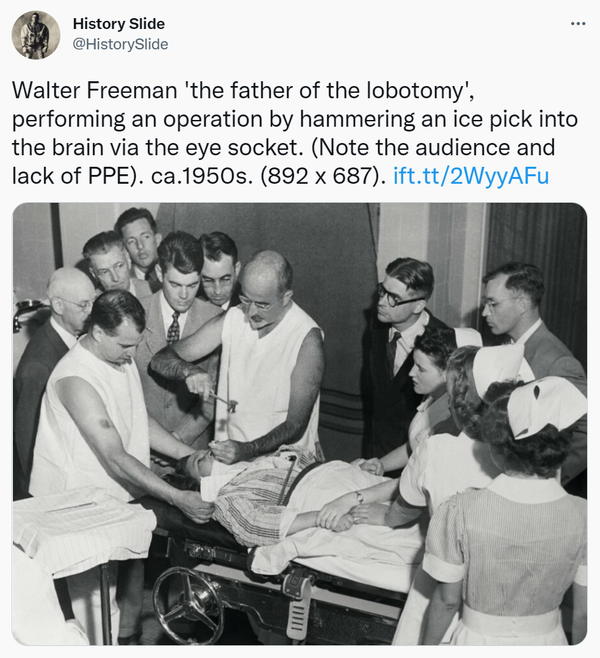 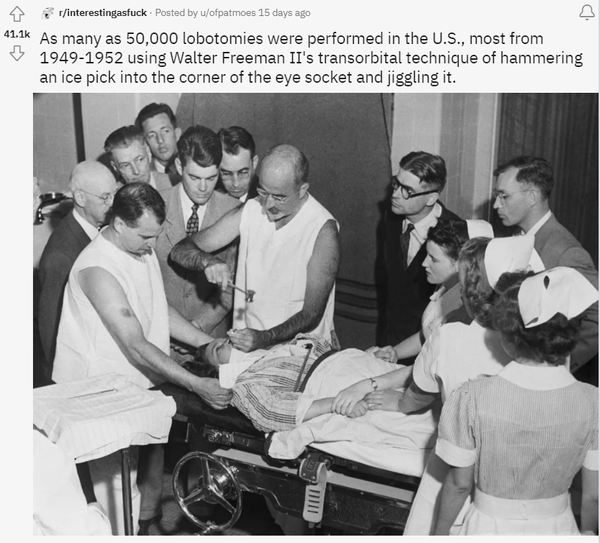 There's a grain of truth to these claims, but they're also partly false, for reasons we'll explain below. First, let's take a brief look at the history of lobotomies.

From Bone Drills to Ice Picks

The earliest lobotomy experiments in the 20th century took various forms, including: opening the skull and removing parts of the patient's brain, drilling two holes in the patient's head and injecting ethyl alcohol directly into the prefrontal cortex of the brain, and deploying a retractable wire loop through a hole drilled in the patient's forehead to disrupt nerve fibers running from the prefrontal cortex to the thalamus. All of these methods were (rightly) controversial and yielded mixed results at best (some patients died), but the latter technique of inserting an instrument through a hole and severing neural connections in the brain caught on in the 1930s, and was even promoted as a "miracle procedure."

During what might be termed the "golden age" of lobotomy, from the mid-1940s to the early 1950s, Dr. Walter Freeman of George Washington University developed and touted a streamlined technique known as a "transorbital lobotomy," which consisted of "sedating" a patient with a series of electroconvulsive shocks, then, instead of drilling a hole, inserting an ice pick-like surgical instrument into the brain by way of the patient's eye sockets to sever neural fibers believed to be the cause of certain kinds of mental illness. 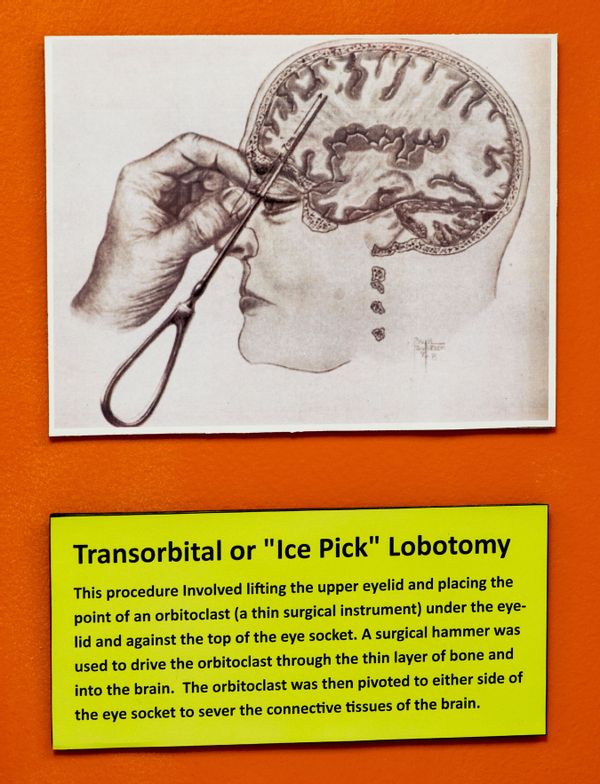 Freeman was a great believer in this technique, and would sometimes travel the U.S. demonstrating transorbital lobotomies in psychiatric hospitals. During the 1950s, this type of psychosurgery became very popular. According to Encyclopedia Britannica, it is true that more than 50,000 lobotomies were performed in the United States, most of them between 1949 and 1952. By his own count, Freeman performed or participated in roughly 3,400 of these himself, according to Jack El-Hai, author of the 2005 book "The Lobotomist."

Were 50,000 Lobotomies Performed with an Ice Pick?

In literal terms, it's false that 50,000 lobotomies in the U.S. were performed with an ice pick. The vast majority of them were performed with medical instruments that resembled (and indeed were originally modeled after) a standard kitchen ice pick. Partially because of that resemblance, transorbital lobotomies were widely known, colloquially, as "ice-pick lobotomies," including within the psychiatric community itself. The other reason is that Freeman, who invented the two standard instruments used in these lobotomies, the transorbital leucotome and the orbitoclast, not only was inspired by the design and utility of the humble ice pick for his purposes, but really did use a kitchen ice pick in his earliest transorbital lobotomy experiments, beginning with cadavers.

The problem with the existing instruments he tried was that they could not pierce the transorbital plate, a layer of bone protecting the brain, without damaging it. In "The Lobotomist," El-Hai describes Freeman's "aha" moment:

Stymied, he searched for a tool that would work. He needed "some instrument, slender, sharp and tough," he wrote. In his kitchen drawer at home he found the solution: a tool with a strong shaft and sturdy wooden handle. It was a standard ice pick imprinted with the name of the Uline Ice Company.

Did Freeman use that kitchen ice pick to perform lobotomies on actual living patients? The historical consensus appears to be yes, he did. How many? That's difficult to ascertain. El-Hai told us in an email that he found no number cited in Freeman's archived records. "My best guess is that Freeman used a kitchen ice pick for the first dozen or two dozen of his transorbital lobotomies before advancing to better equipment," El-Hai said.

The lobotomy boom of the late 1940s and early 1950s gradually waned as the '50s wore on, largely because of successes with newly developed antipsychotic and antidepressant medications that produced much better (and less risky) results, but also because the procedure came to be highly criticized within the medical profession itself. Today, according to a 2017 study, "the lobotomy is rarely practiced, and Freeman's techniques are obsolete."

El-Hai, Jack. The Lobotomist: A Maverick Medical Genius and His Tragic Quest to Rid the World of Mental Illness. John Wiley & Sons, 2007.

How Many People Actually Got Lobotomized? | Britannica. https://www.britannica.com/story/how-many-people-actually-got-lobotomized. Accessed 20 Jan. 2023.

"The History of Lobotomy." Psych Central, 6 May 2022, https://psychcentral.com/blog/the-surprising-history-of-the-lobotomy.