Did a Lion Take Revenge on a Trophy Hunter?

A video that purportedly shows a lion attacking a big game hunter was likely intended as part of an anti-hunting campaign. 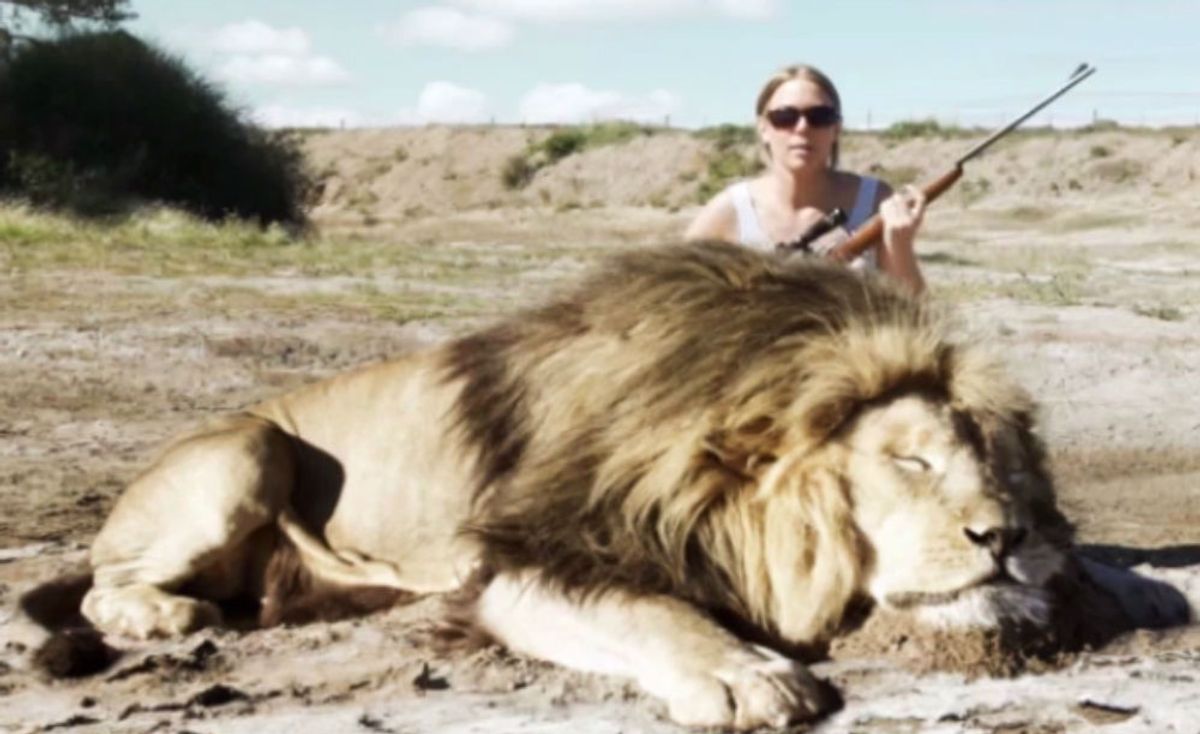 Claim:
A video shows a hunter getting attacked by a lion while posing with a recent kill.
Rating:

On 7 June 2016, YouTube user Jayden Tanner published a video purportedly showing "leaked" footage of a trophy hunter being attacked by a lion while posing for a photograph with another lion she had allegedly killed:

The video was accompanied by the hashtag #stoptrophyhunting, and was shared with a message claiming that the video was taken in South Africa:

I managed to get my hands on this video when I was in South Africa a couple of months ago, a hunter showed me and thought it was hilarious. For me this video highlights a distressing situation that the world needs to see.

Every year trophy hunters kill thousands of exotic wild animals in Africa, this combined with poaching poses a serious threat to the survival of our most loved and endangered species. We have to stop this now. Animals are also bred in captivity for the sole purpose of being hunted by tourists who are willing to pay the high price tag, a lion hunt can cost a trophy hunter up to $35'000.

We need to raise awareness around this issue. Please share and save our wildlife.

This video does not show a real incident. In addition to some problems with the optics — the lion makes its way from the horizon to the camera at an alarmingly fast (and quiet) rate — this footage used an image of a lion that was killed in 2013, not 2016 as claimed in the YouTube message: On 28 April 2013, a series of images showing the result of a lion hunt in South Africa were posted to the web site Hunting Grounds. While a story accompanying the photographs provided some information about the hunt, there was no mention of the hunters being attacked by a lion:

Wow. I do not really know where to begin in this story of how I got the massive Lion. Let us back up to January of 2013 to when it all started...

The next encounter was the same but he walked out of the thicks and saw him at about 100 yards. This lion was HUGE! larger than what everyone thought when they took the original photo. I got him in my scope but he was trotting away from us and I didn't shoot. Then the lion ran like hell knowing he was being hunted. We spent another hour tracking him down and didn't see him. I felt discouraged.

We kept on going on the tracks. The bushmen were amazing trackers, nothing like you would see anywhere. Well, not expecting anything to happen as it was getting really hot and only a couple hours left until sunset the bushmen stopped and the whole team stopped very quickly. Ahead of us was the lion in the bushes...about 7 yards in front of us. We could see that he was pissed and crouched down. He was moving his body around and either he was going to run away or run at us. So, I got him in my sites and BOOM! Nailed him in the spine and got one lung. Lucky shot it was. If I would have missed or even got a true lung/vital shot he would have ran at us or ran away while dying and the other PH's would have shot him for our protection because I would not have had time to reload.

The lion was down and was not moving. He was dying slowly from the shot. So to end his life quicker I finished him off with another shot.

The creators of the video displayed above took a photograph of a lion that was killed in 2013, and placed it into the foreground of a generic picture resembling South Africa. Two people then acted out a scene in which a lion "took revenge" on two trophy hunters. While the creators of this video are still unknown, it seems likely that this footage was made as part of an anti-hunting campaign.