Was a Bust of Abraham Lincoln Vandalized in Chicago in Protest of Confederate Statues?

A bust of Abraham Lincoln was vandalized in Chicago, but it's unclear who did it and when it happened. 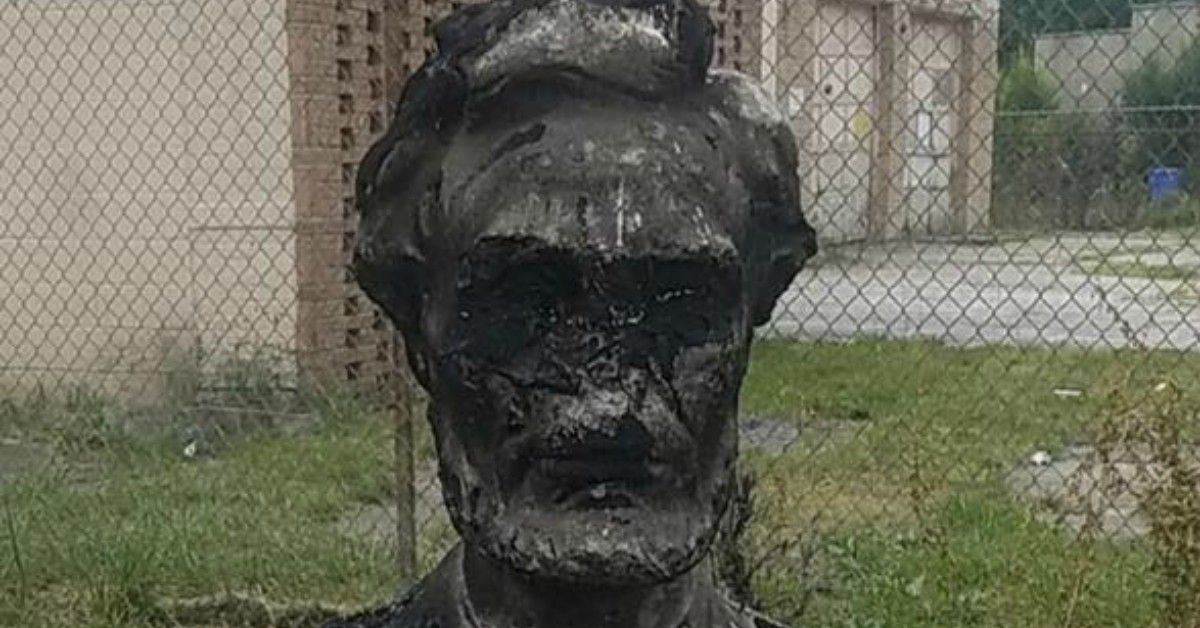 Claim:
A bust of Abraham Lincoln was vandalized in Chicago in protest of confederate statues.
Rating:

On 16 August 2017, Chicago alderman Raymond Lopez posted a photograph showing a bust of Abraham Lincoln in the West Englewood neighborhood of Chicago that was damaged and burned: What an absolute disgraceful act of vandalism. This bust of Abraham Lincoln, erected by Phil Bloomquist on August 31, 1926, was damaged & burned.

Near 69th & Wolcott, if anyone has any information regarding this act, please contact the police or my office immediately.

Although Lopez did not mention President Trump, the 12 August 2017 white nationalist rally in Charlottesville, Virginia, or the controversy over the removal of Confederate statues in his Facebook post, the timing of the photograph caused several outlets to post hot takes of the incident. Some argued that the statue was vandalized by "liberals" who insist on removing any artifact from the Civil War. Others, including alderman Lopez, argued that Trump's comments about white nationalism had enraged a nation and had caused people to act out:

“When you have a President who, from his point of moral authority as leader of the free world, condones the actions of white supremacists, neo-Nazis … when he refuses to refute what their actions are — you embolden people to continue,” Lopez said Thursday. “Now, you’re giving them a path to come out and be as anger-filled as they want to be.”

While the photograph of the damaged Lincoln statue is real, those commenting on who was responsible or why the damage occurred are merely speculating. As of press time, that information is not available. We've reached out to the Chicago Police Department, Commander Kenneth Johnson of the Chicago Police's 7th District, and the 17th Ward's office (Raymond Lopez is not the alderman of the 17th Ward) for more information.

It's also unclear when the damage actually occurred. Lopez told the Chicago Sun Times that the statue was vandalized in the days following the rally in Charlottesville, but this has not been confirmed. An Englewood resident told the  that the statue may have burned over 4th of July when the statue was used as a platform to set off fireworks:

A West Englewood resident interviewed Thursday speculated that some burn damage to the Lincoln bust may have been caused by fireworks set off on July 4th.

“People were out partying on the 4th of July and lighting fireworks off of it,” said Christopher Jackson, 22, who lives two blocks from the statue and saw the revelers also light newspapers on fire on top of the statue.

“It’s f—– up, honestly,” said Jackson, who works as a cook at a downtown eatery and chatted while waiting for a bus steps from the statue.

“You’d think people would appreciate it,” he said. “Abraham Lincoln is Abraham Lincoln. He’s one of the people who helped us. He freed the slaves. That’s a big one.”

Jackson also said that whoever vandalized the statue may not have known that it was a bust of Abraham Lincoln. Photographs dating back to 2006 show that the statue has been in a state of disrepair for more than a decade. Local news web site DNA Info wrote in 2013:

A little-known statue of Abraham Lincoln in Englewood has fallen into such disrepair that some residents wonder if passersby even know who the statue pays tribute to.

The 3-foot high concrete statue of Illinois' favorite son has been a fixture at 69th Street and Wolcott Avenue for nearly 90 years. However, in the last several years it has become dilapidated, and residents want it restored to its previous glory.

"There used to be a time when it was cleaned up. Now no one takes care of it," said Pearlin Fields, 74, who lives in the 6900 block of South Wolcott Avenue. "If the statue is going to be there, the least someone could do is wash it every now and then."

We've collected various photographs of the statue over the years and found that this was not the first time that the bust had been vandalized: