Lincoln and Lee's Views on Slavery

A meme widely circulated in the wake of a controversy over Confederate memorials does not accurately reflect Abraham Lincoln's and Robert E. Lee's views on slavery and the Civil War. 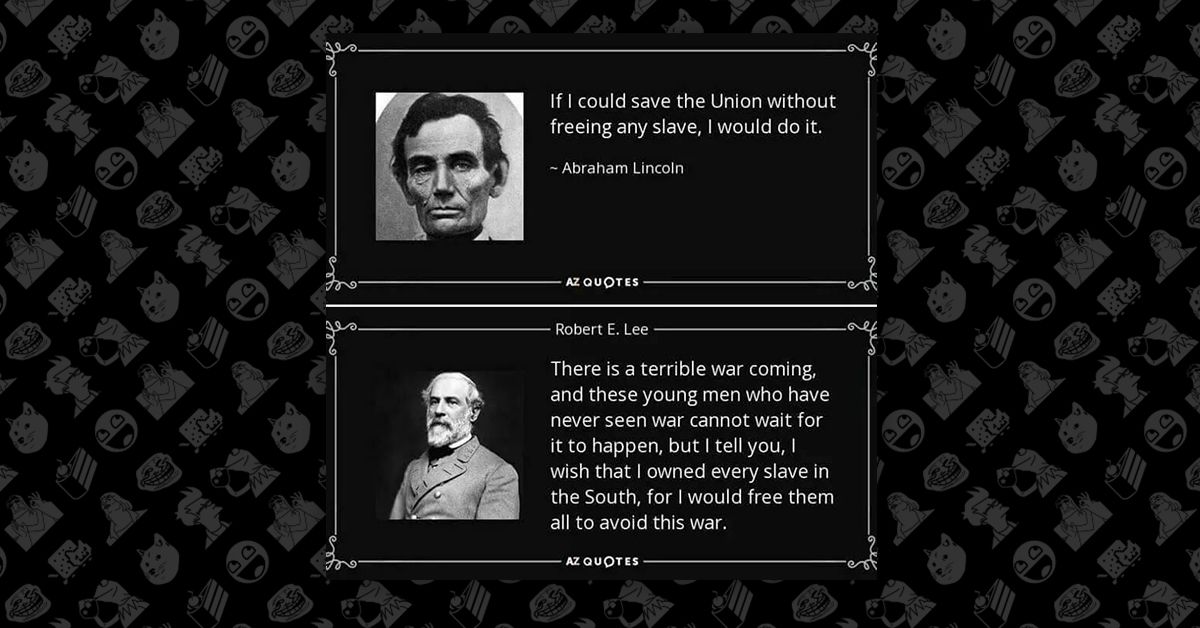 Previous Article
Next Article
Article 14 of 14 in Collection

The outbreak of violence at a white nationalist rally in Charlottesville, Virginia, in August 2017 led to renewed debate in the United States about the appropriateness and meaning of public monuments to Confederate figures. Was removing statues, memorials, and other commemorations of those who fought on the Southern side in the Civil War a form of "political correctness" tantamount to "changing history", or was it a justified end to displaying "explicit symbols of white supremacy" in America's public spaces?

That debate included, typically, the circulation via social media of memes attempting to foster skewed historical perspectives on the Civil War and slavery, including this one which juxtaposed purported quotes from President Abraham Lincoln and Confederate General Robert E. Lee on those subjects: The quote attributed to Lincoln in that meme was but an incomplete reproduction of a single sentence that was plucked from a longer piece of correspondence and offered without a shred of context, a misleading technique used to create the false impression that Lincoln said the exact opposite of what he actually meant.

The line "If I could save the Union without freeing any slave I would do it ..." comes from an open letter Lincoln wrote in August 1862 to New-York Tribune editor Horace Greeley, who had recently published an editorial criticizing Lincoln for being "strangely and disastrously remiss" in efforts to emancipate slaves. In his response, Lincoln made it clear that his single, paramount goal in waging war was to restore the Union as quickly as possible and "not [to] either to save or to destroy slavery," and that he disagreed with those who asserted that his goal should necessarily encompass either the abolition or the preservation of slavery:

I have just read yours of the 19th. addressed to myself through the New-York Tribune ... As to the policy I "seem to be pursuing" as you say, I have not meant to leave any one in doubt.

I have here stated my purpose according to my view of official duty; and I intend no modification of my oft-expressed personal wish that all men every where could be free.

It's also important to note that in his closing, Lincoln drew a clear distinction between what he felt his political duty required of him (i.e., preservation of the Union and not a forced, unilateral abolition of slavery) and what his personal viewpoint on the slavery issue was (i.e., a "wish that all men every where could be free").

As for the quote attributed to General Lee, about his supposed wish (expressed on eve of the Civil War) that he wished he "owned every slave in the South" so that he could head off the conflict by "free[ing] them all," there is no record of Lee's having expressed any such sentiment. The closest one can come to finding any documentation of Lee's having said anything similar is a reminiscence published by Presbyterian pastor John Leyburn in Century Magazine in 1885, some fourteen years after Lee's death.

In that reminiscence, the Rev. Dr. Leyburn (who, like Lee, was a Virginian but relocated to Baltimore after the conclusion of the Civil War) stated that he had engaged Lee in conversation in 1869 while the latter was in Baltimore in connection with a railroad project. According to Leyburn, during that conversation the former Confederate general averred that he had not waged war over the issue of slavery, that he "was rejoiced" that slavery had been abolished, and that he would "cheerfully have lost all I have lost by the war" in order to see the end of slavery:

"So far," said General Lee, "from engaging in a war to perpetuate slavery, I am rejoiced that slavery is abolished. I believe it will be greatly for the interests of the South. So fully am I satisified of this, as regards Virginia especially, that I would cheerfully have lost all I have lost by the war, and suffered all I have suffered, to have this objective obtained." This he said with much earnestness.

Even this passage, which does not match the quote attributed to Lee above, is problematic in several ways: primarily that the purported conversation was witnessed by no one other than the person who reported it, that it was not disclosed until some sixteen years after the fact, and that Lee was long dead by the time it emerged and thus could not confirm or deny it. Moreover, even if it were correctly reported, we can't determine at this remove whether it truly reflected Lee's beliefs at the time, or whether it was part a post-war effort by Lee to resurrect his reputation in the North.

Much could be written about Lee's attitude towards slavery, but perhaps the best single example of it (and one of the few expressed in his own words) is a letter he penned to his wife in 1856, in which he described slavery as "a moral and political evil" and anticipated its eventual abolition, but in which he also maintained that slavery was a greater evil to white people than to black people, and that black people were better off living enslaved in America than living free in Africa:

There are few, I believe, in this enlightened age, who will not acknowledge that slavery as an institution is a moral and political evil. It is idle to expatiate on its disadvantages. I think it is a greater evil to the white than to the colored race. While my feelings are strongly enlisted in behalf of the latter, my sympathies are more deeply engaged for the former. The blacks are immeasurably better off here than in Africa, morally, physically, and socially. The painful discipline they are undergoing is necessary for their further instruction as a race, and will prepare them, I hope, for better things. How long their servitude may be necessary is known and ordered by a merciful Providence.

Their emancipation will sooner result from the mild and melting influences of Christianity than from the storm and tempest of fiery controversy. This influence, though slow, is sure. The doctrines and miracles of our Saviour have required nearly two thousand years to convert but a small portion of the human race, and even among Christian nations what gross errors still exist! While we see the course of the final abolition of human slavery is still onward, and give it the aid of our prayers, let us leave the progress as well as the results in the hands of Him who, chooses to work by slow influences, and with whom a thousand years are but as a single day."

“He was not a pro-slavery ideologue,” Eric Foner, a Civil War historian, author and professor of history at Columbia University, said of Lee. “But I think equally important is that, unlike some white southerners, he never spoke out against slavery.”

"[W]hat interests people who debate Lee today is his connection with slavery and his views about race. During his lifetime, Lee owned a small number of slaves. He considered himself a paternalistic master but could also impose severe punishments, especially on those who attempted to run away. Lee said almost nothing in public about the institution."

"Lee’s code of gentlemanly conduct did not seem to apply to blacks. During the Gettysburg campaign, he did nothing to stop soldiers in his army from kidnapping free black farmers for sale into slavery. In Reconstruction, Lee made it clear that he opposed political rights for the former slaves. Referring to blacks (30 percent of Virginia’s population), he told a Congressional committee that he hoped the state could be “rid of them.” Urged to condemn the Ku Klux Klan’s terrorist violence, Lee remained silent."

Previous Article
Next Article
Article 14 of 14 in Collection

The New York Times.   "A LETTER FROM PRESIDENT LINCOLN: Reply to Horace Greeley. Slavery and the Union. The Restoration of the Union the Paramount Object."     24 August 1862.