Are These Photos from Life Magazine's 'Guide to Kissing'?

Kissing is one of many tasks that actors and actresses are asked to perform on stage. 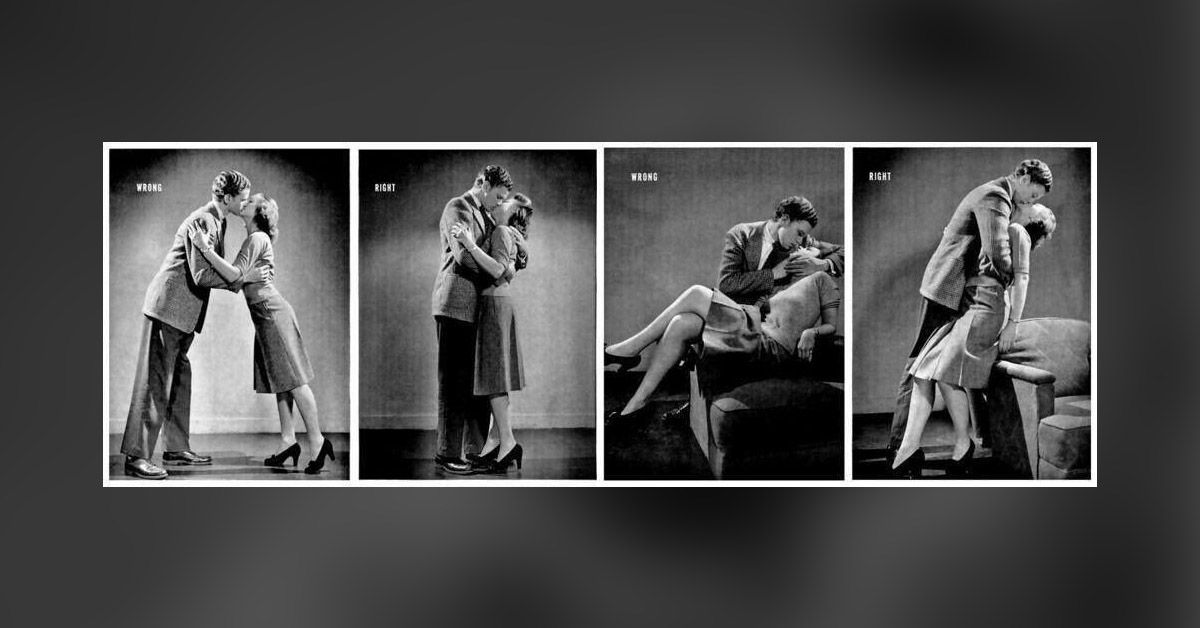 Claim:
A set of photographs was originally published in Life magazine's "Guide to Kissing" in 1942.
Rating:

These pictures were published in Life magazine in 1942.

However, these pictures were not featured in an actual "Guide to Kissing" for ordinary people. These images related to how actors and actresses should kiss on stage, not how real-life romantic partners should show affection.

A set of photographs supposedly published in a "Guide to Kissing" by Life magazine in 1942 is frequently shared on social media: These pictures were truly published in a 1942 issue of Life. However, the caption that frequently accompanies these photographs — "Life Magazine's Guide to Kissing, 1942" — does not accurately provide the context in which they were originally published.

For one, these pictures are not demonstrating how romantic real-life partners should show their affection but how actors and actresses should kiss while on stage.

These photographs were published in the September 1942 issue of Life in a section entitled "Speaking of Pictures ... This is What You Learn At Stage School." In addition to showing young actors how to kiss, this section also illustrated how to "fall down stairs" and pick up objects with proper posture. The photographs in this section were based on a small handbook called "Stage Technique Made Easy" by Selma Paley Morosco and Athea Lounsbury.

Here's how these photographs were introduced in Life: Here on these pages are pictures which illustrate clearly three all-important tenets of the theater: posture, poise, and practice. In order to give a finished performance, all young actors and actresses must learn these three by heart: must learn how to kiss properly, how to fall downstairs and how to pick up objects from the stage without looking clumsy or awkward.

The pictures are based on a study of stage practice made by Althea Lounsbury and Selma Paley Morosco, widow of the late producer, Oliver Morosco, and recently published in a small handbook called Stage Technique Made Easy. Mrs. Morosco's method calls for a thorough understanding of body positions on the stage and an intense application of the principles of grace. For subjects LIFE chose actress Helen Larmon and Dorothy Butler, and Dick Simon who places Clarence Jr., the eldest son in Life With Father.

The four pictures demonstrating the right and wrong ways to kiss on stage were also accompanied by little notes describing why the technique was considered proper or improper. Wrong: Actors kissing on-stage look too juvenile if they are so stand-offish.
Right. Boy and girl should stand close together and not hold each other too tightly. Wrong. Sprawling all over the chair is considered ungraceful. Bad technique.
Right. Girl should sit on arm of the chair and boy should hold her firmly but lightly.

In short, the caption that frequently accompanies these pictures makes it seem as if Life talked to a love expert about the proper way to show affection and then published a "Guide to Kissing." But that isn't the case. While these photographs were truly published in Life in 1942, they were included in a piece focused on proper stage technique for actors and actresses.