Did Liberals Demand an 'Offensive' WWI Memorial Be Torn Down?

A popular meme about the Bladensburg Cross claimed that "liberals" were "offended" by the WWI memorial and demanded its removal. 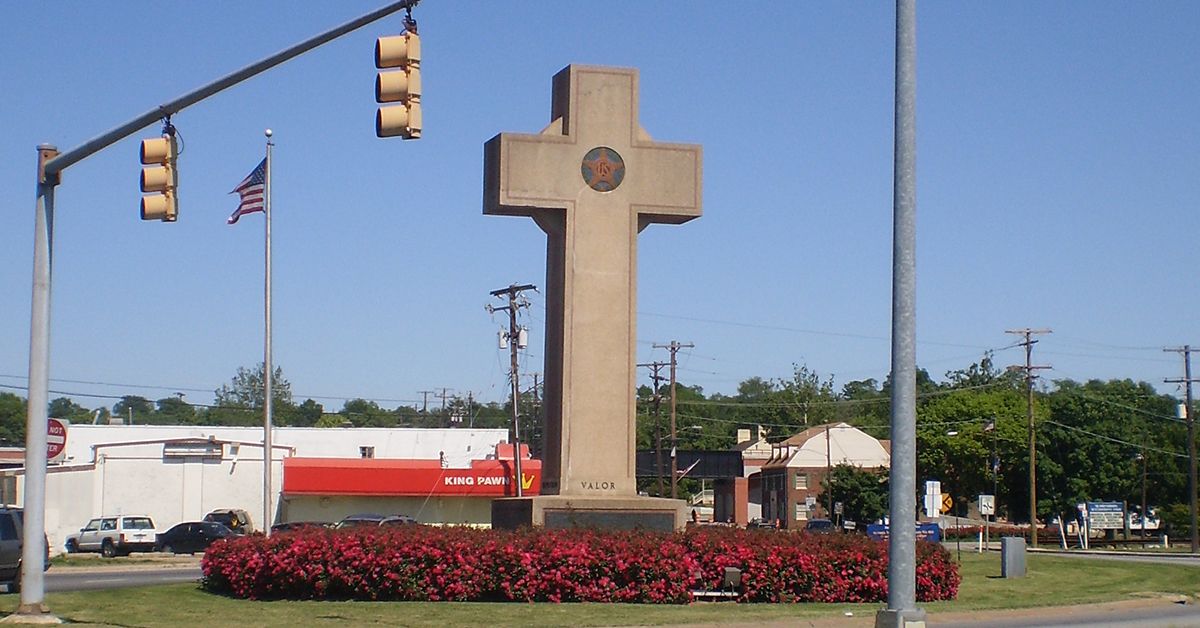 Claim:
Liberals were offended by a World War I memorial and demanded it be torn down.
Rating:

In December 2016, a Maryland federal court heard an appeal in a suit brought by the American Humanist Association in 2014 arguing that a cross on public land violated the Establishment Cause.

The plaintiffs maintained that the memorial was unconstitutional, not offensive, and called for a replacement monument, not a total eradication of the WWI memorial.

On 7 December 2016 , a meme appeared on social media that claimed an unnamed "liberal group" sought to tear down a 90-year-old World War I memorial, because they found it offensive: The post contained no information or citation, did not name the "liberal group" involved, the location of the memorial, the date of the purported controversy, and the grounds by which these individuals believed the monument to be offensive. (Nevertheless, the item's share count reached six digits in just two days.)

The image was easily identifiable as the Bladensburg, Maryland "Peace Cross" (known simply as the “Bladensburg Cross”):

Known also as “Peace Cross.” The Snyder-Farmer Post of the American Legion of Hyattsville erected the forty foot cross of cement and marble to recall the forty-nine men of Prince George’s County who died in World War I. The cross was dedicated on July 13, 1925, by the American Legion. A bronze tablet at the base of the monument contains the unforgettable words of Woodrow Wilson: “The right is more precious than the peace; we shall fight for the things we have always carried nearest our hearts; to such a task we dedicate ourselves.” At the base of the monument are the words, “Valor, Endurance, Courage, Devotion.” At its heart, the cross bears a great gold star.

A 7 December 2016 Washington Post article reported that years-long litigation over the cross  was brought by the American Humanist Association due to the religious nature of the public memorial:

The high court has allowed some monuments with religious content to stand and rejected others on public sites ... The towering, pink-hued cross honors the 49 Prince George’s County men who died in World War I. The monument was completed in 1925 with funds raised by the American Legion and local families.

It sits on land owned by the Maryland-National Capital Park and Planning Commission, a state agency that pays for upkeep and repairs, according to court filings.

The appeal was brought by the American Humanist Association after a U.S. District Court judge [in 2015] declined to order that the cross be removed, saying that it is a historically significant secular war memorial.

The original complaint [PDF] was filed in February 2015 against the Maryland-National Capital Park and Planning Commission. In the suit's opening lines, the plaintiffs explained the action was not because they found the symbol itself offensive:

This action challenges the constitutionality of the Defendant’s ownership, maintenance and prominent display on public property of a massive Christian cross (the “Bladensburg Cross”) as a violation of the Establishment Clause of the First Amendment of the United States Constitution, as applied to Maryland by the Fourteenth Amendment.

Under "Causes of Action," the group reiterated its motivation in bringing the suit:

The Defendant’s ownership, maintenance and prominent display on public property of the Bladensburg Cross amounts to the endorsement and advancement of religion (and, specifically, an endorsement of and affiliation with Christianity) in violation of the Establishment Clause of the First Amendment to the United States Constitution.

The Defendant’s ownership, maintenance and prominent display on public property of the Bladensburg Cross lacks a secular purpose in violation of the Establishment Clause of the First Amendment to the United States Constitution.

The Defendant’s ownership, maintenance and prominent display on public property of the Bladensburg Cross fosters excessive governmental entanglement with religion in violation of the Establishment Clause of the First Amendment to the United States Constitution.

The Defendant acted under color of state law in violating the First Amendment as described herein in violation of 42 U.S.C. §1983.

The American Humanist Association said repeatedly that the litigation was about what the group argued was a violation of the Establishment Clause, not a matter of offense. A 26 February 2014 article in The Humanist further explained the suit:

At the core of the First Amendment’s Establishment Clause is the principle that the government must not favor or prefer some religions over others, or religion over non-religion. No matter how small the preference may seem to some, particularly to adherents of the favored religion, the framers of the Constitution believed that “The breach of neutrality that is today a trickling stream may all too soon become a raging torrent.”

When the government erects an exclusively Christian monument on government property, it violates this central command of the Establishment Clause by sending a clear message that Christianity is the preferred religion over all others. When the religious monument is dedicated to fallen soldiers, it sends an even more egregious message that only Christian soldiers are worth memorializing. Non-Christian soldiers such as atheists and humanists are inherently excluded.

Such is the case with a cross in Bladensburg, Maryland, commonly known as the “Peace Cross,” which stands forty-feet high on a government-owned median between roadways. In addition to the obvious sectarian nature of the Latin cross, the Bladensburg cross was also erected with religious motives ... In seeking the removal of the Bladensburg cross, the American Humanist Association seeks only to eliminate this stigmatic message to non-adherents of Christianity. It urges the government to erect an inclusive monument that will honor all fallen soldiers, regardless of their faith.

On 30 November 2015, the Baltimore Sun reported that a federal court in Maryland ruled the Bladensburg cross was constitutional, a decision that prompted the December 2016 appeal:

The U.S. District Court for the District of Maryland ruled [in November 2015] that even though the Bladensburg World War I Veterans Memorial, a 40-foot-tall monument erected in 1925, takes the shape of a cross, its purpose is not primarily religious. Therefore, the court found, it does not violate the First Amendment's provision that "Congress shall make no law respecting an establishment of religion."

Social media users were riled once again about the controversy after the Fourth Circuit Court of Appeals overturned the ruling, prompting a Fox News opinion column by Todd Starnes on 18 October 2017:

In 2014, the American Humanist Association -- a group that believes in "being good without a god" -- filed a lawsuit alleging the cross-shaped memorial is unconstitutional and demanding it be demolished, altered, or removed ... On [17 October 2017], the Fourth Circuit Court of Appeals agreed and ruled the historic memorial must be torn down -- all because the Bladensburg Memorial is in the shape of a cross.

I warned Americans in my new book, “The Deplorables’ Guide to Making America Great Again,” that the war against religious liberty and traditional American values is far from over.

A militant group of atheists, agnostics and free-thinkers want to eradicate Christianity in the public marketplace. The only way to stop this evil scourge is for people of faith to stand together and fight back in the courts.

Starnes did not mention that the American Humanist Association's "[urged] the government to erect an inclusive monument that will honor all fallen soldiers, regardless of their faith" or that the cross was on public land. The Baltimore Sun reported:

A federal appeals court ruled that a 40-foot, cross-shaped war memorial that has stood on public land in Maryland for nearly a century is unconstitutional because it “excessively entangles” the government with religion ... The 2-1 ruling reverses a 2015 district court decision that found the purpose of the cross is not primarily religious and that the site has been used almost exclusively for celebrating federal holidays.

Supporters of the memorial have raised the impact an adverse decision could have on other sites — notably, Arlington National Cemetery. Crosses are common on headstones and elsewhere at the cemetery. A 24-foot granite cross, the Canadian Cross of Sacrifice, is positioned near the Tomb of the Unknown Soldier.

The court dismissed the notion that the two sites are related.

“The crosses there are much smaller than the 40-foot tall monolith at issue here,” the court wrote. “And, significantly, Arlington National Cemetery displays diverse religious symbols, both as monuments and on individual headstones.”

“In the majority’s view, the memorial is unconstitutional based predominantly on the size of the cross, and neither its secular features nor history could overcome the presumption,” Gregory wrote. “But such a conclusion is contrary to our constitutional directive.”

Updated [19 October 2017]: Added information about a 17 October 2017 reversal of the 2015 decision deeming the preservation of Bladensburg cross constitutionally sound.