Do Most People Struggle To Recognize the Lowercase Letter ‘G’?

The letter "G" is one of several English letters that has multiple lowercase versions. 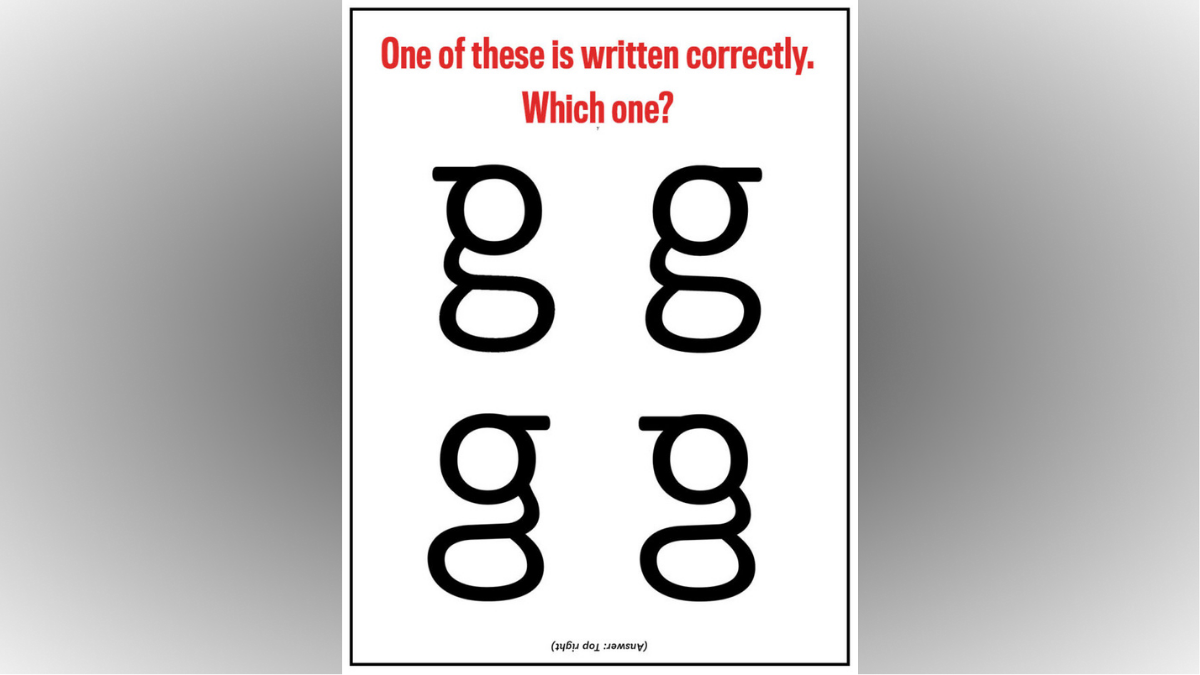 Claim:
A study conducted by Johns Hopkins University researchers in 2018 found that just over one-quarter of people are able to properly recognize the most commonly used English version of the lowercase print "G."
Rating:

Many Americans are unaware that there are two correct versions of a lowercase "G" — and even fewer people are able to correctly identify and write each version if they're asked, according to research conducted by Johns Hopkins University researchers.

The findings could hold implications for how future generations learn to read and write in a mostly digital world. Overall, just one-quarter of study participants were able to properly recognize the most commonly used English version of the lowercase print "G."

The Different Types of Gs

When it comes to print, the letter "G" has two lowercase versions: the “opentail,” which looks like a fishhook and is commonly used in handwriting, and the “looptail,” which is often used in printed or typed material. Both the opentail and looptail versions of "G" are what are known as “allographs,” or different, yet distinct, letter shapes that correspond to the same letter identity. Although the looptail is most commonly used in printed materials, most people never learn how to write or properly identify this version. (There are other allographs of the letter "G," including uppercase printed "G" and upper- and lower-case cursive "G.")

“We think that if we look at something enough, especially if we have to pay attention to its shape as we do during reading, then we would know what it looks like, but our results suggest that’s not always the case,” said Michael McCloskey, a cognitive scientist at Johns Hopkins Krieger School of Arts and Sciences, in a news release at the time.

“What we think may be happening here is that we learn the shapes of most letters in part because we have to write them in school. Looptail 'G' is something we’re never taught to write, so we may not learn its shape as well.”

What the Study Entailed

As part of their experiment, the researchers first surveyed fonts used in books and found that the looptail appeared in 74% of children’s picture books, 89% of children’s chapter books, and 97% of books for adults. To test how well a person might be able to identify either version, they then turned to a three-part experiment that has been published in a 2018 edition of the Journal of Experimental Psychology.

What the Findings Mean

The researchers concluded that these “surprising” gaps in readers’ knowledge hold implications for understanding how we interpret letters and how that knowledge is acquired. It also implies that a person’s knowledge of a letter may decline when they are not being regularly written out.

“What about children who are just learning to read? Do they have a little bit more trouble with this form of 'g' because they haven’t been forced to pay attention to it and write it?” said McCloskey.

“That’s something we don’t really know. Our findings give us an intriguing way of looking at questions about the importance of writing for reading. Here is a naturally occurring situation where unlike most letters, this is a letter we don’t write. We could ask whether children have some reading disadvantage with this form of 'g.'”