Does This Photo Show the MGM Lion During Filming?

The image supposedly showing the famous animal strapped to a table has circulated since 2015. 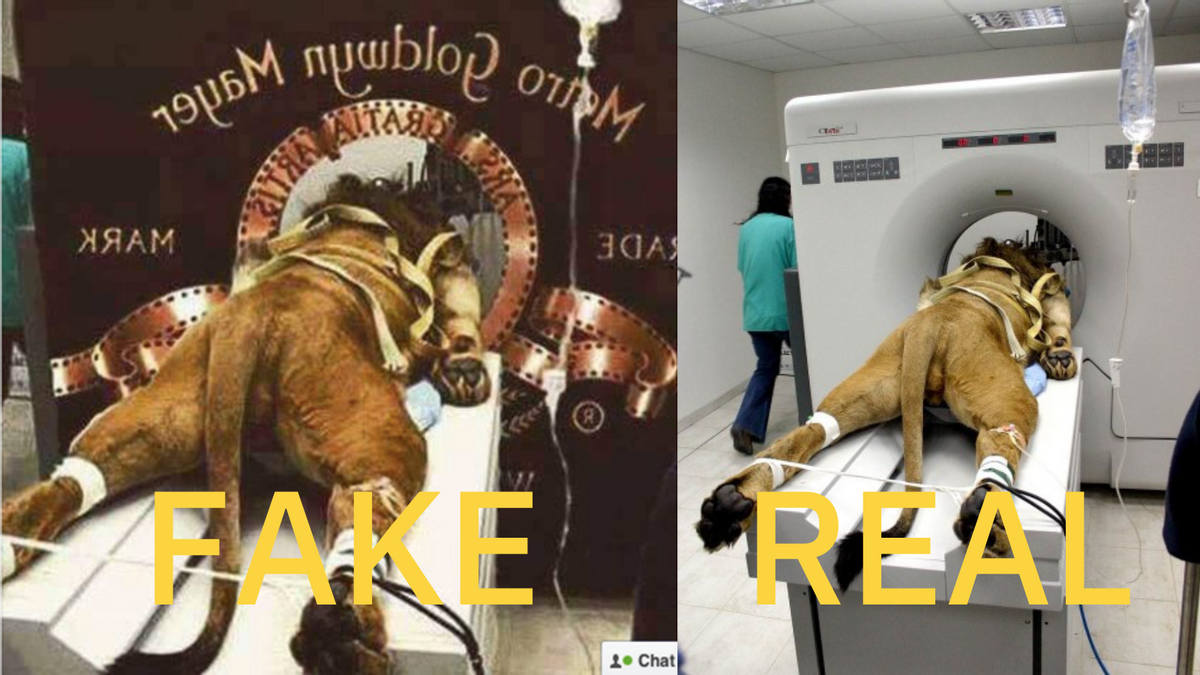 Claim:
A photograph shows a lion strapped to a table for the filming of MGM studio's iconic logo.
Rating:

In October 2015, a Snopes reader emailed us about a photo supposedly showing a behind-the-scenes look into the filming of Metro-Goldwyn-Mayer (MGM) studio's promotional clip that displays at the beginning of its films and features a lion. The reader asked:

Was the Lion really strapped down to film this famous trademark clip?

The leonine logo of the MGM film studio, originally designed for Goldwyn Pictures Corporation in 1916, is one of the Hollywood movie industry's most recognizable images.

That iconic branding is familiar not only as a static logo, but also as the moving image of a roaring lion that precedes the presentation of MGM pictures. Those familiar with the training and handling of exotic animals know well how difficult it can be to get a creature such a lion to roar on command, though, so one might perhaps wonder what efforts went on behind the scenes to capture a suitable take of MGM's Leo the Lion mascot in full roar.

One suggested answer has been provided by the above-displayed photograph purportedly showing Leo strapped to a table while filming his iconic roar, a picture that has been circulating online since at least January 2015.

[See also: Did the MGM Lion Kill Its Trainer?]

However, the above-displayed image does not capture either MGM's Leo or the filming of a company logo. This is a manipulated version of a photograph that was originally taken in 2005, when a two-year-old Barbary lion named Samson underwent a CAT (Computer Aided Tomography) scan after falling ill at an Israeli zoo:

A young lion called Samson has become the star attraction at an Israeli zoo after his life was saved by a vet in a pioneering nine-hour brain operation.

To the horror of zoo staff and visitors, the lion began staggering around his pen at the Hai-Kef zoo in Rishon Lezion, near Tel Aviv, his legs buckling beneath his weight as if he were a calf struck down by mad cow disease.

Merav Shamir, a veterinary neurological specialist from the Hebrew University of Jerusalem, diagnosed that Samson was suffering from damage to the posterior portion of his skull — a condition caused by vitamin A deficiency that has killed every other lion known to have suffered from it.

After a Computer Aided Tomography (Cat) scan on Samson's skull confirmed her suspicions, Dr Shamir sent an urgent message to veterinary experts around the world asking if any had performed corrective surgery.

'No one had tried anything like this," she said. "But we decided to give it a go. After all, we had nothing to lose.'

MGM did not need to strap Leo the Lion to a table in order to get him to roar for their famous logo. In fact, what the company actually did was far more interesting (and dangerous):

The images displayed directly above may be partially responsible for fostering the later rumor that one of MGM's first Leos killed its trainer and his assistants while they attempted to film him.

Nov. 4, 2022: This article was updated to meet Snopes current formatting and editing guidelines.