Lebron James Wore a 'We March, Y'all Mad' Protest Shirt?

An image purportedly showing Lebron James wearing a "We march, y'all mad" shirt was digitally manipulated. 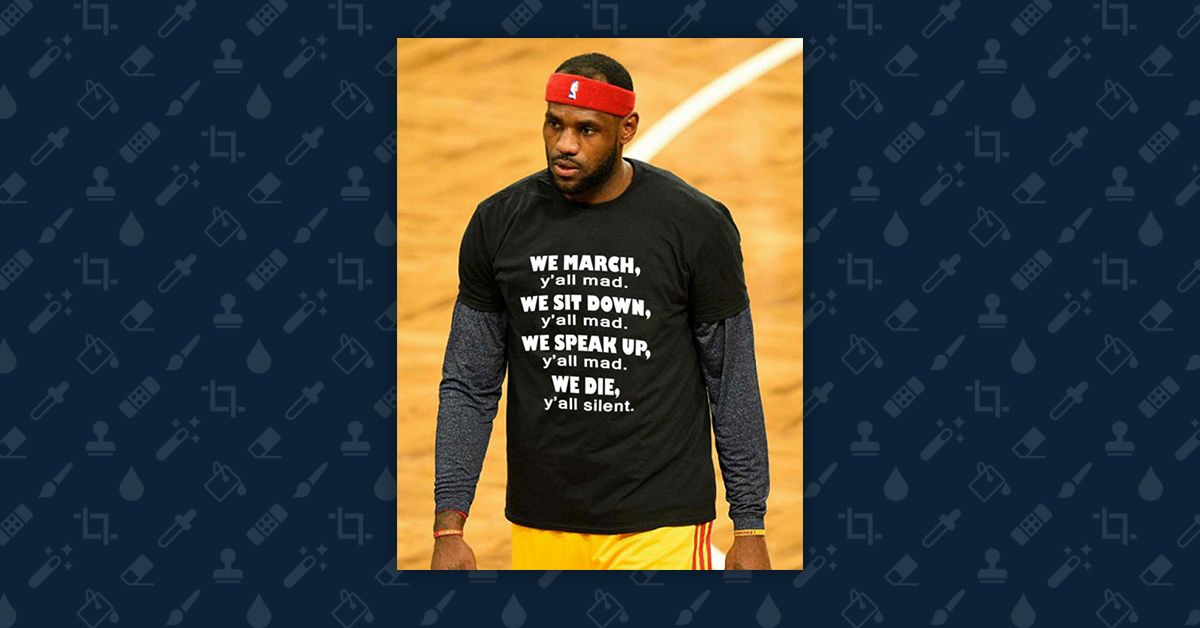 A photograph purportedly showing NBA player Lebron James in a shirt reading, "We march, y'all mad. We sit down, y'all mad. We speak up, y'all mad. We die, y'all silent" was widely circulated on social media after it was posted to the Twitter account "Merlin's Mom" on 9 October 2017: This image has been doctored.

The original photograph was taken on 8 December 2014 and showed James in an "I Can't Breathe" t-shirt. James was one of several NBA players to wear this shirt in honor of Eric Garner, who was killed by police officers earlier that summer:

Cleveland Cavaliers stars LeBron James and Kyrie Irving wore T-shirts with "I Can't Breathe" on them while warming up for Monday night's game at the Brooklyn Nets.

"I can't breathe" were the last words of Eric Garner, who died in July after a confrontation with an New York Police Department officer. The incident was caught on tape and sparked national outrage.

Here's a comparison of the doctored image (left) and the original image (right): James told reporters that he wore the shirt because he wanted to make a statement about the current state of society and show support for Eric Garner's family:

"It's just for us to make a [statement] to understand what we're going through as a society," James said when asked about the T-shirt. "I've been quoted over and over about what's going on as far as it's more of a notion to the family, more than anything. Obviously, as a society we have to do better. We have to be better for one another. It doesn't matter what race you are. It's more of a shout out to the family more than anything, because they're the ones that should be getting all the energy and effort."