Does This Photo Show White-Clad Members of the League of Nazi Socialist Women?

Any resemblance between Nazis dressed in white and the Democratic women of the U.S. House of Representatives is purely propaganda. 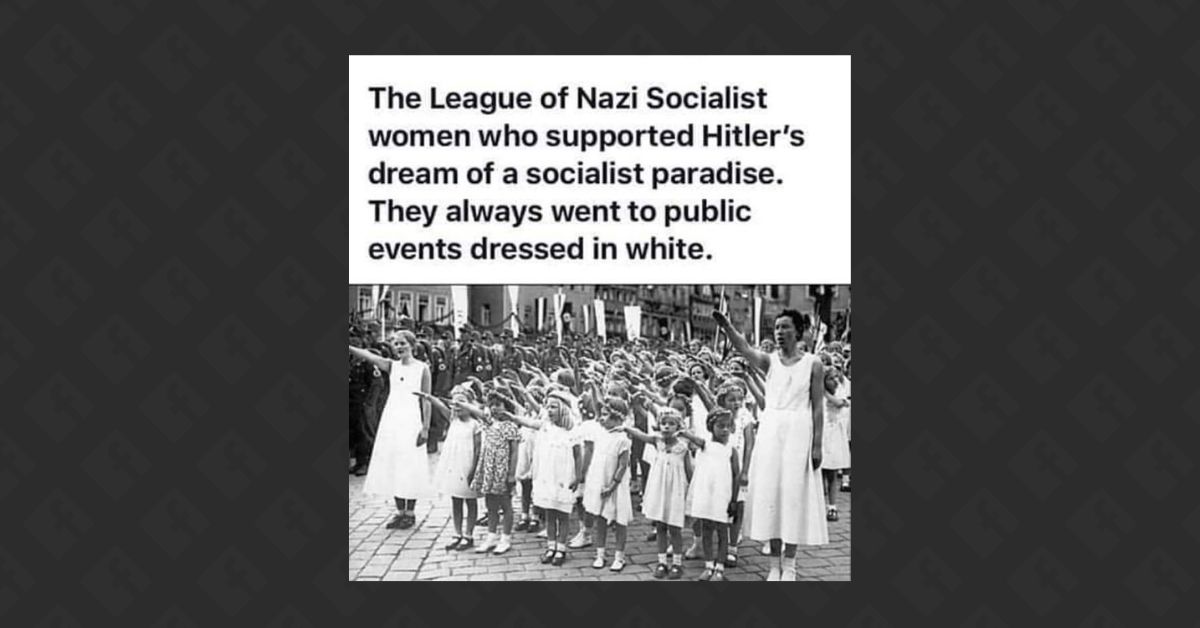 Democratic female members of the U.S. House of Representatives made a visual statement during President Trump's 2019 State of the Union (SOTU) address by wearing what they described as "suffragette white" -- a nod toward the women's voting rights movement of the early 20th century. Suffragists of the period often (though not always) appeared at public demonstrations and gatherings in garbed in white clothing.

Rep. Jan Schakowsky (D-Illinois), among others, tweeted a photograph of the assembled women of the House with a caption acknowledging the source of their inspiration:

Today, we wear suffragette white to send a strong message that we are fighting #ForThePeople and advancing women’s rights. #WomenUnited pic.twitter.com/949MrTWf99

There was no missing the dozens of white-clad women in photographs and video showing the House chamber, from which Trump delivered his address: Nor was it the first time female House members had participated in such a gesture. In 2017, then-House Minority Leader (now Speaker of the House) Nancy Pelosi tweeted a photograph of herself and more than three dozen of her colleagues along with the hashtag #WomenWearWhite in advance of President Trump's first appearance before a joint session of Congress in February of that year.

The Congresswomen garnered extra media attention during the 2019 State of the Union thanks to an increase in their numbers brought about by the previous year's mid-term elections. Pool cameras in the House chamber lingered over the group's boisterous celebrations when President Trump mentioned women's gains in the workplace and in attaining elective office.

None of this went down well with Trump's base of supporters, who leapt to social media to share memes likening the white-clothed Democrats to reviled, oppressive movements such as the Ku Klux Klan and Nazis. One widely disseminated meme used as its centerpiece an image purportedly depicting members of the "League of Nazi Socialist Women" dressed in white and flashing the "Sieg Heil" Nazi/Hitler salute:

Sometimes the image was posted side-by-side with a photograph of the House Democrats, as in this example accusing the latter of "following Hitler":

WOW THIS IS SHOCKING GUYS. @HouseDemocrats ARE FOLLOWING HITLER

The league of Nazi Socialist women who supported Hitlers Dream of a Socialist Paradise.

The photograph is genuine, but it is not described accurately in these posts. For starters, the group of females shown (which actually consists almost entirely of very young girls) is not the so-called "League of Nazi Socialist Women," of whose existence we found no historical record. Indeed, the very name is nonsensical and redundant, given that "Nazi" is already a contraction of the German compound-word Nationalsozialistische, which means "National Socialist."

A Nazi organization known (in English) as the National Socialist Women's League (Nationalsozialistische Frauenschaft, or NSF) did exist, as did a League of German Girls (Bund Deutscher Mädel, or Deutschen Jungmädel), which was the female component of the Hitler Youth organization (Hitler Jugend). We weren't able to document with any certainty that the girls and women in the photograph belonged officially to either group.

The photograph can be found in the archives of both Getty Images and Age Fotostock, where it is briefly captioned as follows: "A female student body making the Nazi salute during a military parade of the SA (Assault Squad) of the Nazi Party (Photo by Mondadori Portfolio)." It is sometimes identified as having been taken in the town of Coburg.

Although nearly all of the subjects pictured were wearing white dresses and their outfits were clearly color-coordinated for the event, we found no evidence to support the contention that Nazi girls' or women's groups habitually dressed all in white for public occasions. In fact, a fair amount of photographic evidence indicates that they didn't. In the image below, for example, a contingent of Deutschen Jungmädel can be seen marching in a Nazi parade in the German city of Worms. A few are dressed in white, but most are wearing white blouses and dark skirts (according to Michael Hans Kater, a historian of Nazism and author of the 2009 book Hitler Youth, white blouses and navy-blue skirts were their standard attire): Similarly, we ran across more historical photographs of the National Socialist Women's League showing its members wearing outfits of various light and dark colors than we found showing them dressed entirely in white.

Finally, even if it were true that a Nazi women's organization whose members always wore white to public events did exist, nothing links such a group -- historically, ideologically, or symbolically -- to the democratically-elected female members of the U.S. Congress who donned white on a few specific occasions for the stated purpose of honoring the suffragists. Nazism was the antithesis of what these women, not to mention their early 20th century forerunners who paved the way for their ascent to elective office, represent.

The National Holocaust Centre and Museum.   "The League of German Girls."     Accessed 8 February 2019.