Did a GOP Lawmaker Report a High School Student for Cursing Over Gun Safety?

Rep. Mark Amodei did not notify Noah Christiansen's school, but he defended the staff member who did. 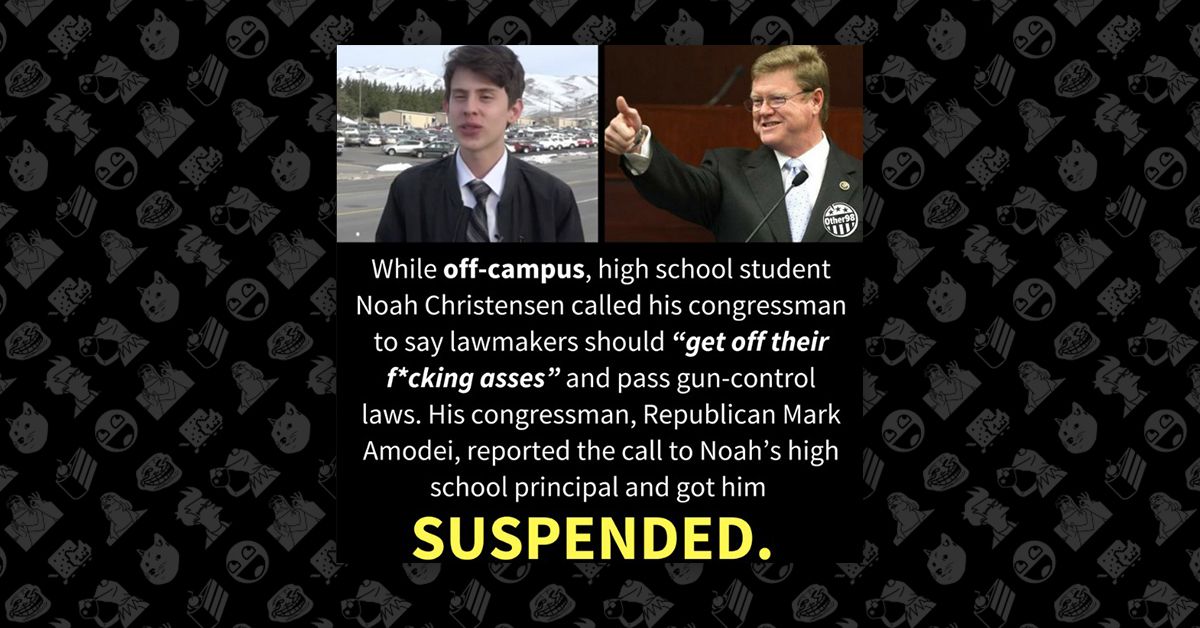 A staff member rather than Rep. Amodei himself placed the call to Christiansen's school; Amodei himself never spoke to the student; the suspension was lifted by the district.

In March 2018, a Republican lawmaker from Nevada came under criticism from the American Civil Liberties Union after one of his staff members reported a student for cursing during a phone call to his office, a student who was seeking support for tighter gun safety laws in the wake of a February 2018 mass shooting at a high school in Parkland, Florida.

Rep. Mark Amodei confirmed that the staff member, Arturo Garzon, spoke to 17-year-old Noah Christiansen. However, Amodei said that Garzon did not act in retaliation over the call when he spoke to the principal at Robert McQueen High School: "He didn't ask for punishment. He reported what [my staff] thought was remarkable conduct out of hundreds of phone calls we got, and that's it."

On 23 March 2018, the district lifted the suspension, saying in a statement that it wanted to ensure that its resources "are spent on educating students rather than on expensive and protracted litigation."

Christiansen reportedly called Amodei's office after taking part in a student walkout calling for tighter gun safety laws in the wake of the fatal mass shooting attack at Marjory Stoneman Douglas High School in Parkland, Florida, a month earlier. The student allegedly called for lawmakers to "get off their fucking asses" at one point in the call.

Garzon contacted Christiansen's school and spoke to principal Amy Marable. Christansen was later suspended for two days for "disrespectful behavior/language" and was barred from taking office as his class secretary/treasurer. According to the ACLU of Nevada, Christiansen said that school officials "yelled" at him for contacting Amodei: "All I want is for this suspension to be overturned and to take my place as class secretary, so I can move on to college with my record restored. I've never even had a detention before, let alone a suspension."

The ACLU subsequently contacted both Amodei and the school, as well as the Washoe County School District in Reno, demanding both an apology to Christiansen and the revocation of his suspension. A district spokesperson emailed a release to us stating that no students were punished in connection with the walkout itself.

Rep. Amodei has so far declined to apologize for his staff's actions, saying: "I don't call people I don't know on the phone and drop F-bombs and ... when I do use [profane] language in public, I am totally and completely responsible. Quite frankly, welcome to the club, young fellow."

We contacted Amodei's office seeking a comment on the suspension being lifted.