Is This Lawmaker Drinking from a Chocolate Syrup Bottle?

Surprisingly, there is a solid explanation behind this strange image. 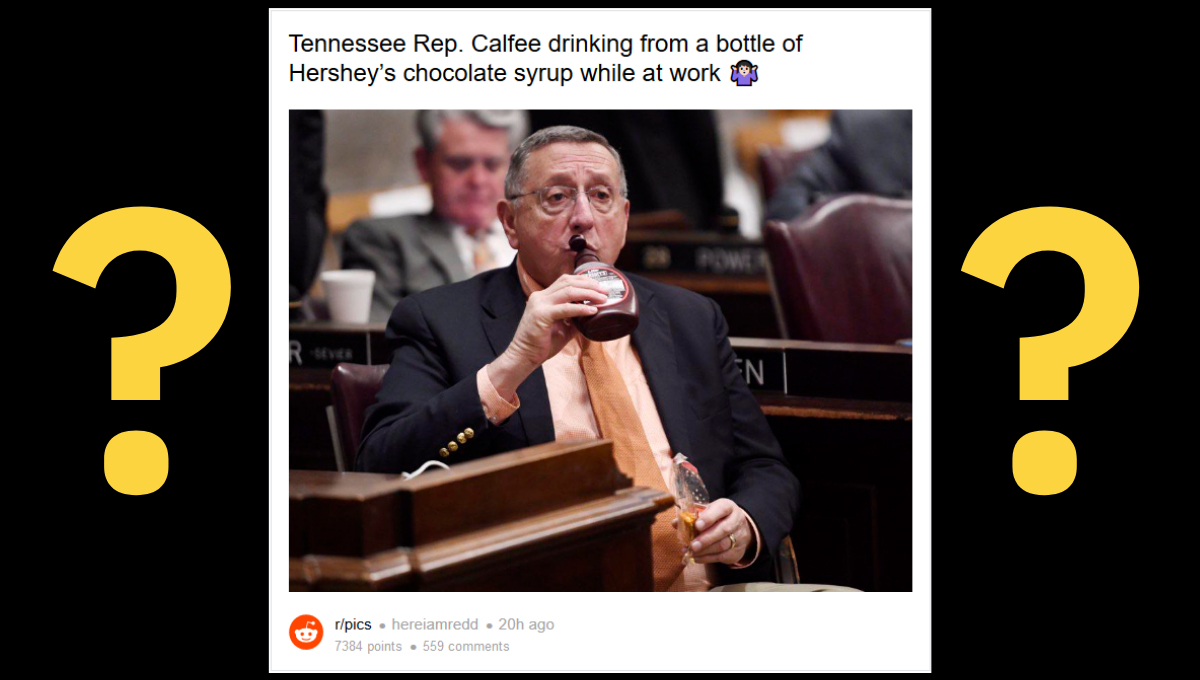 This is a genuine photograph of Calfee drinking from a chocolate syrup bottle.

However Calfee was not drinking chocolate syrup. The container was repurposed as a water bottle.

The photograph was genuine. However, Calfee wasn't drinking chocolate syrup. He was just having a sip of water.

This photograph was taken by George Walker IV for the Tennessean on Feb. 3, 2020, while Calfee was waiting for Gov. Bill Lee to begin his State of the State address. After the photograph went viral, Calfee explained that his chocolate syrup bottle was actually filled with water.

"It's a repurposed syrup bottle that I drink my water out of," Calfee said on Tuesday. "I'm not going to buy a $25 or $35 or $45 water bottle that’s not worth what it costs because I'll probably put it down and leave it somewhere."

Calfee said he and his wife, Marilyn, "recycle everything."

"I was fixing to put it in the plastic recycling one day at home, and I thought, shoot, I can put water in that," Calfee said.

“My wife and I are farmers, so we believe in taking care of the earth and recycle everything,” he explains, adding that “when you have grandchildren you can’t run out of ketchup, ranch dressing or chocolate syrup.” Calfee says he was going to throw away the Hershey’s bottle a few years ago and thought, “you know that’d make a good water bottle. I’m not going to pay $40 for a water bottle that I might set down and leave somewhere.”

Carlisle, Madeleine.   "A Photo of a Tennessee Lawmaker Seemingly Chugging Chocolate Syrup Went Viral. It's Not Quite What it Seems."     Time.   5 February 2020.

Allison, Natalie.   "Why Was a Tennessee Lawmaker Drinking Out of a Hershey's Syrup Bottle? We've Got Answers."     The Tennessean.   4 February 2020.