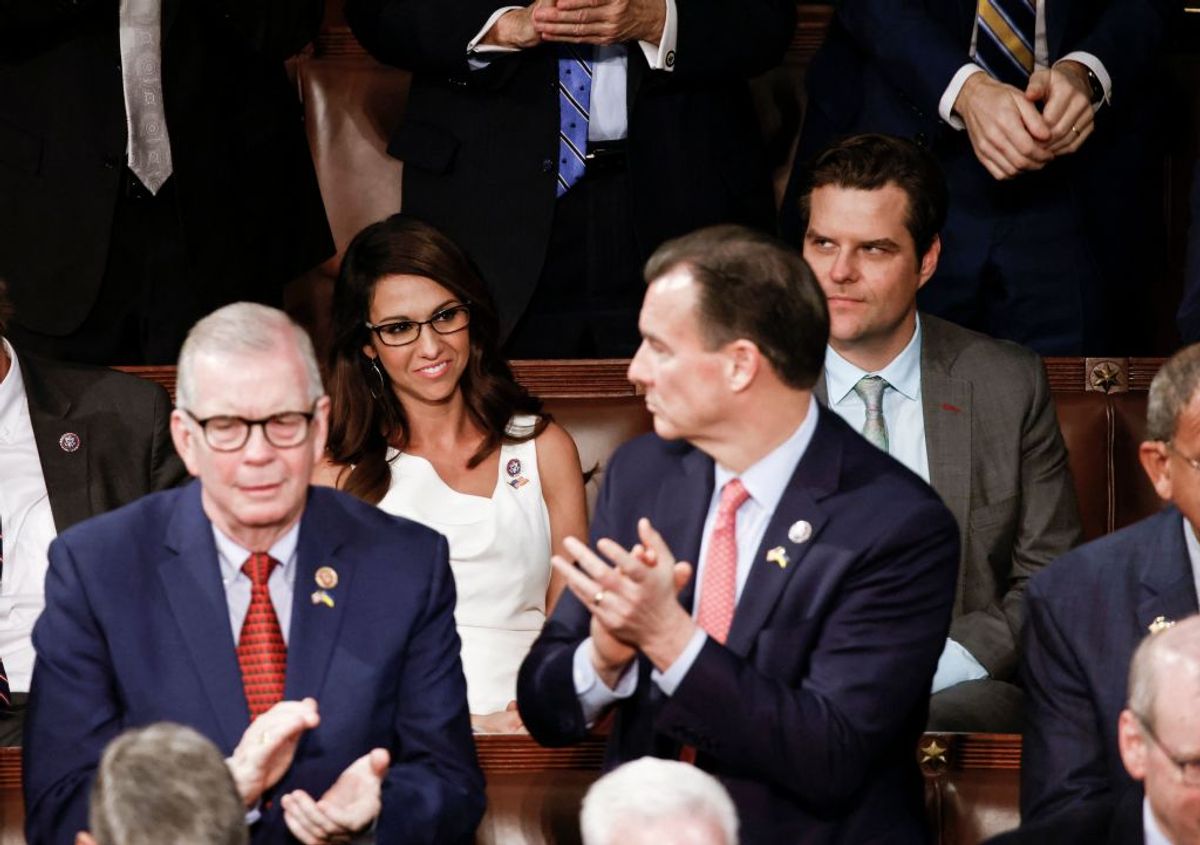 Claim:
U.S. Rep. Lauren Boebert and U.S. Rep. Matt Gaetz did not join the standing ovation for Ukrainian President Volodymyr Zelenskyy as he gave a speech at the U.S. Capitol in late 2022.
Rating:

At numerous instances during Zelenskyy’s speech, both Gaetz and Boebert were spotted sitting down while legislators around them participated in a standing ovation. However ...

... They were seen standing with everyone else at other moments in the speech.

Ukrainian President Volodomyr Zelenskyy addressed the U.S. Congress on Dec. 21, 2022, to thank them for their support and to request more aid amidst the ongoing invasion of Russia in Ukraine. Though Zelenskyy received multiple standing ovations and thunderous applause from both parties during his speech, Republicans Rep. Matt Gaetz and Rep. Lauren Boebert did not appear to share in the enthusiasm.

One clip from C-SPAN even went viral, in which they appeared to remain seated as others around them stood and clapped:

While this clip is indeed accurate, Gaetz and Boebert did stand at different points in the speech, particularly toward the end, and stood for Zelenskyy's departure.

They were seen standing at the very beginning as they waited for Zelenskyy's arrival. Gaetz is in a grey suit, and Boebert is in a white dress. They can be seen standing on the upper half, toward the center of this shot. 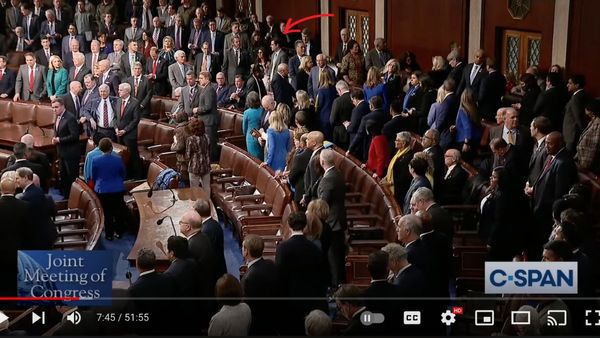 At around 14 minutes, Gaetz and Boebert were seen standing and chatting with other members of the House. As Zelenskyy entered and stood at the podium, the audience stood and clapped to welcome him. Gaetz and Boebert stood along with everyone else, though it was difficult to determine if they were applauding, as well. Gaetz's arms appeared to be by his side as he leaned down to speak to Boebert. 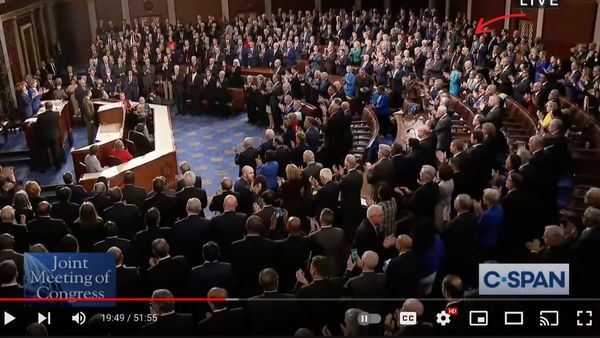 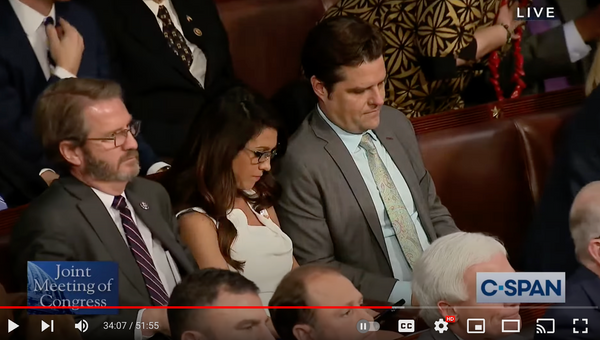 The moment took place right after the 34-minute mark in the video below:

Zelenskyy said, "Your money is not charity. It's an investment in the global security and democracy that we handle in the most responsible way." At 35:27 another standing ovation occurred after this statement, and as people sat down, through this wide-camera shot Gaetz and Boebert can be seen seated (marked with the red arrow), having not stood up at all in that moment. 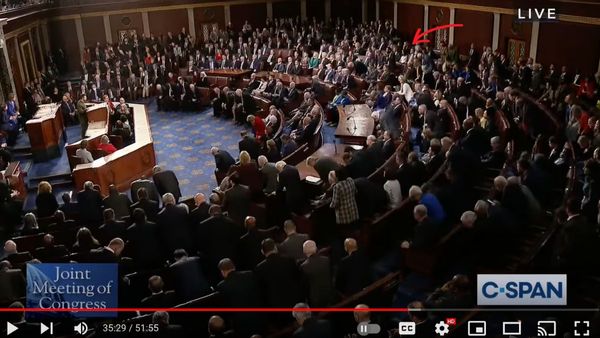 The crowd got up again as Zelenskyy said, "Russia" and paused, and Boebert and Gaetz remained seated along with some other legislators.

They did however join the standing ovation later on in his speech. At around 42:35, Gaetz can be seen standing up, though Boebert is not visible from this angle. At the 46:43 mark, as Zelenskyy leaves while holding the American flag, they can be seen standing along with everyone else:

In this Getty Image, they can also be seen standing alongside everyone else (the top right of the frame): 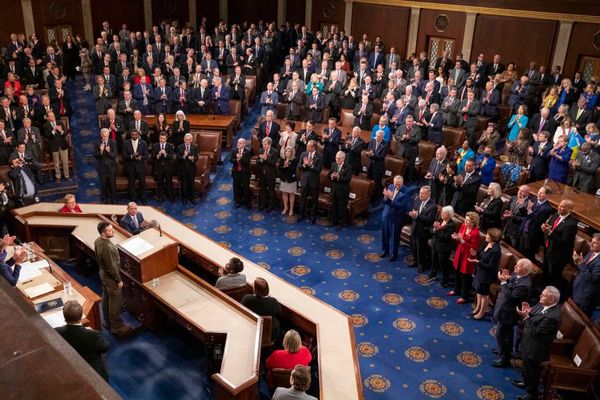 But in this one, they are seated as everyone around them gives a standing ovation: 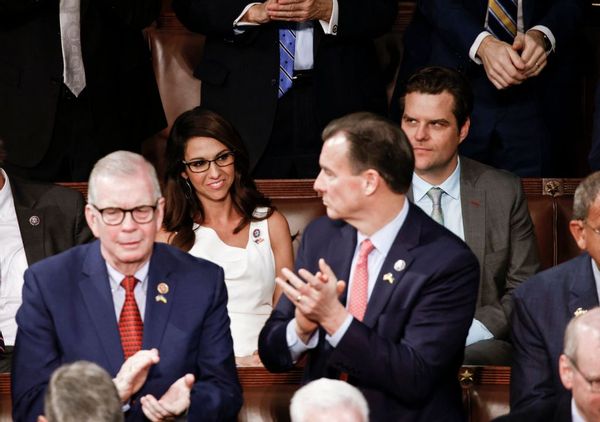 They are both vocal opponents of sending Ukraine aid. Gaetz posted on Twitter soon after the speech:

Boebert also expressed sympathy for the people of Ukraine but demanded a "full audit" of where U.S. money for Ukraine had already gone before she would support sending more money, and called on Biden to do more "at home" to secure the "southern border."

Finally, we should add the pair made news for security related to Zelenskyy's visit, as well.