Yes, the Las Vegas Raiders Tweeted 'I Can Breathe' After Chauvin Conviction

Many online observers criticized what they presented as a crass play on words by the NFL franchise in April 2021. 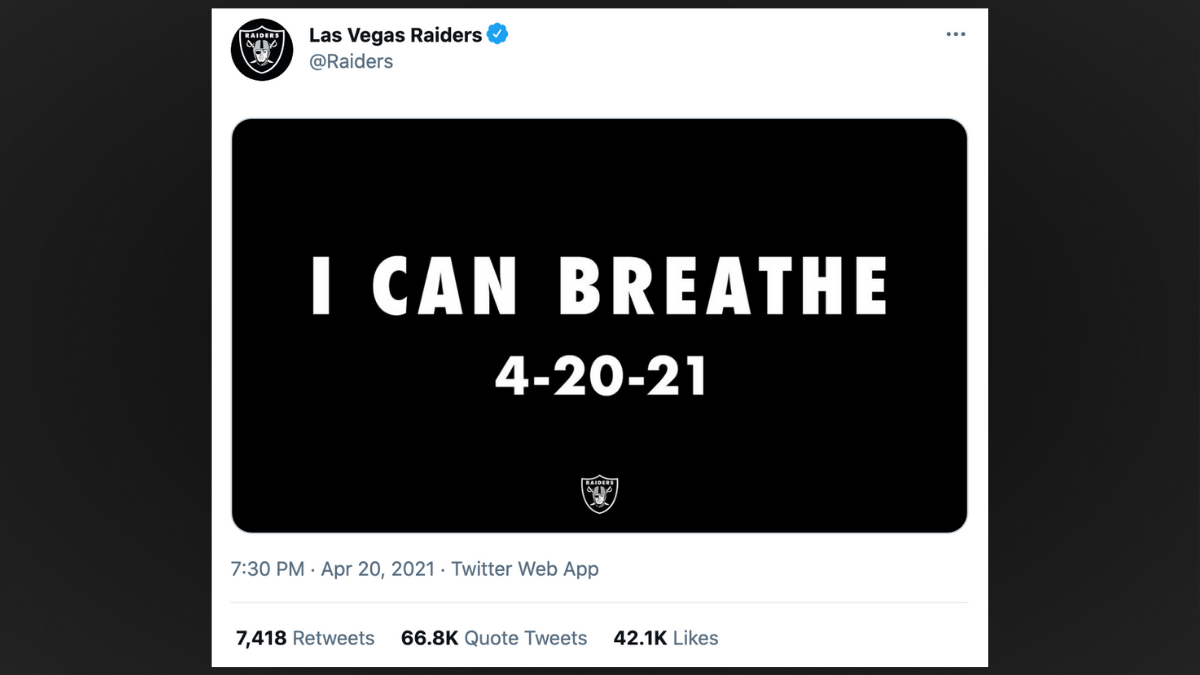 Claim:
In April 2021, the Las Vegas Raiders tweeted out the words "I can breathe," after ex-cop Derek Chauvin's conviction for killing George Floyd by kneeling on his neck. .
Rating:

On April 20, 2021, after a jury in Hennepin County found former Minneapolis police officer Derek Chauvin guilty of murdering George Floyd, the Las Vegas Raiders NFL franchise attracted widespread criticism and ridicule online for what many presented as a crass or thoughtless Twitter post marking the verdict.

The tweet, which contained a banner reading "I CAN BREATHE // 4-20-21" and the Raiders logo, was authentic, and we are issuing a rating of "Correct Attribution." As of April 21, the tweet was still visible on Twitter: The last words spoken by Floyd, a 46-year-old Black man, were "I can't breathe," as Chauvin kneeled on his neck and back for almost nine minutes, during an encounter with police in Minneapolis in May 2020. Two autopsies concluded that Chauvin's actions contributed significantly to Floyd's death, and on April 20, a jury in Hennepin County district court found Chauvin guilty on three charges: second-degree murder, third-degree murder, and second-degree manslaughter.

The phrase "I can't breathe" became a rallying cry and slogan of the broader Black Lives Matter movement, after the death of Eric Garner, a 43-year-old Black man, in July 2014, in Staten Island, New York. Garner repeatedly uttered those words while NYPD officer Daniel Pantaleo kept Garner in what ultimately proved to be a fatal chokehold.

"I can't breathe" is therefore a phrase imbued with significant meaning and symbolic power, both as a reference to specific, high-profile acts of police violence, and as a broader expression of the pervasive oppressiveness of racism and racial injustice.

As such, some online observers criticized the Raiders tweet for appearing to suggest, by means of a crass play on words, that Chauvin's conviction marked a definitive triumph over police violence and racial injustice.

"I can breathe" was also a phrase used by pro-NYPD protesters in the aftermath of Garner's death in 2014.

In an interview with The Athletic, Raiders owner Mark Davis insisted he was not aware of that particular past usage of the words, saying: "I had no idea of that. That’s a situation that I was not aware of. I can see where there could be some negativity towards what I said based on that.”

Davis told both The Athletic and ESPN that the inspiration for the tweet came from Floyd's brother Philonise Floyd, who said after Chauvin's conviction, "Today, we are able to breathe again."

Speaking to The Athletic, Davis insisted he would not be deleting the tweet, which was still visible on Twitter on April 21.