Gitmo Detainees and the LARK Program

A letter describing a LARK program under which Gitmo detainees will be housed with liberals who object to the current treatment of those prisoners is a piece of satire. 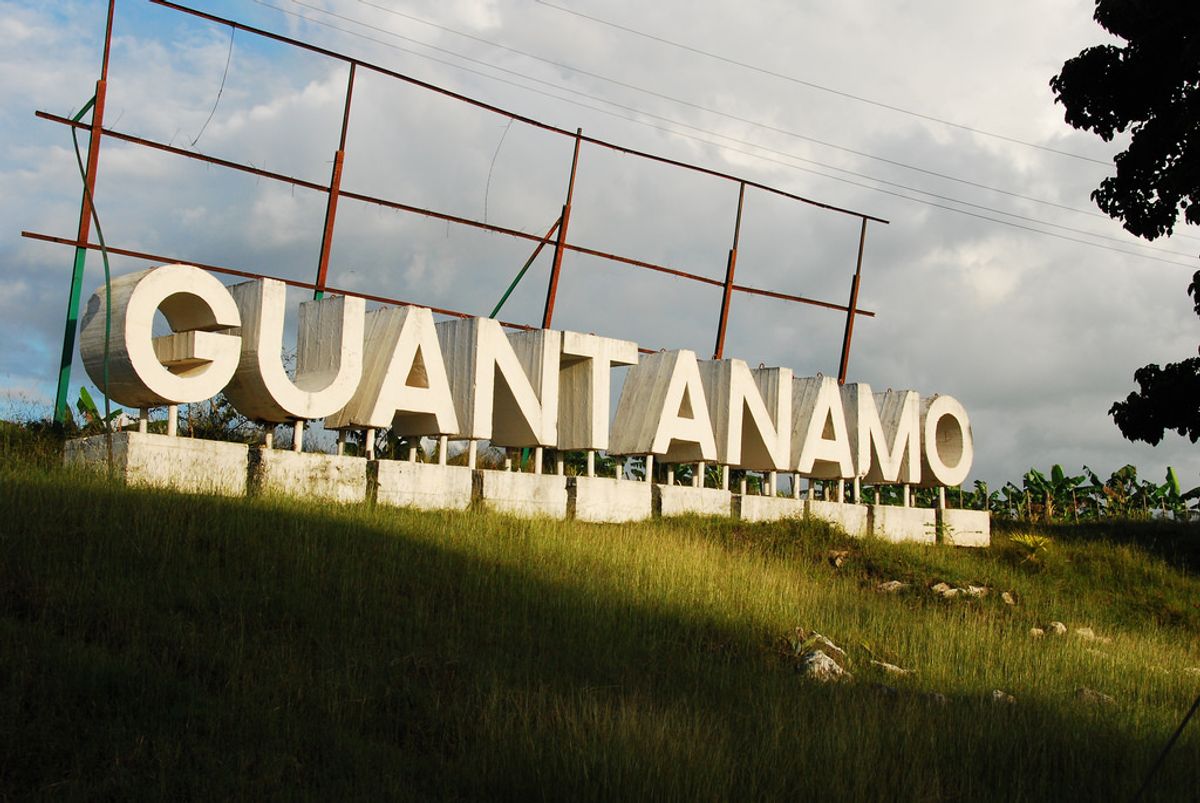 Claim:
Under the LARK program, Gitmo detainees are being housed with liberals who disagree with the U.S. government's treatment of those prisoners.
Rating:

We first encountered this bit of Internet lore (collected in the Example link above) about the government's offering to send Guantanamo detainees to live with "liberals" who complained about their treatment back in May 2002. It has since circulated in multiple versions, the most recent being cast as a letter sent by James "Mad Dog" Mattis, the recently installed Defense Secretary for the Trump administration:

A liberal female from San Francisco wrote a lot of letters to the U.S. government, complaining about the treatment of captive insurgents (terrorists) being held in GITMO. She demanded a response to her letter.

She received back the following reply:

Thank you for your recent letter expressing your profound concern of
treatment of the Taliban and Al Qaeda terrorists captured by American Forces, who were subsequently transferred to the GITMO.

Our administration takes these matters seriously and your opinions were heard loud and clear here at the Pentagon .. You will be pleased to learn, thanks to the concerns of citizens like yourself, we are creating a new department here at the Defense Department to be called 'Liberals Accept Responsibility for Killers' program, or L.A.R.K. for short.

In accordance with the guidelines of this new program, we have decided, on a trial basis, to divert several terrorists and place them in homes of concerned citizens such as yourself, around the country, under those citizens personal care. Your personal detainee has been selected and is scheduled for transportation under heavily armed guard to your residence in San Francisco next Monday.

Ali Mohammed Ahmed bin Mahmud is your detainee, and is to be cared for pursuant to the standards you personally demanded in your letter of complaint. You will be pleased to know that we will conduct weekly inspections to ensure that your standards of care for Ahmed are commensurate with your recommendations. Although Ahmed is a sociopath and extremely violent, we hope that your sensitivity to what you described as his 'attitudinal problem' will help him
overcome those character flaws. Perhaps you are correct in describing these problems as mere cultural differences.

We understand that you plan to offer counselling and home schooling, however, we strongly recommend that you hire some assistant caretakers.

Please advise any Jewish friends, neighbors or relatives about your house guest, as he might get agitated or even violent, but we are sure you can reason with him. He is also expert at making a wide variety of explosive devices from common household products, so you may wish to keep those items locked up, unless in your opinion, this might offend him. Your adopted terrorist is extremely proficient in hand-to-hand combat and can extinguish human life with such simple items as a pencil or nail clippers. We advise that you do not ask him to demonstrate these skills either in your home or wherever you choose to take him while helping him adjust to life in our country.

Ahmed will not wish to interact with you or your daughters except sexually, since he views females as a form of property, thereby having no rights, including refusal of his sexual demands. This is a particularly sensitive subject for him.

You also should know that he has shown violent tendencies around women who fail to comply with the dress code that he will recommend as more appropriate attire. I'm sure you will come to enjoy the anonymity offered by the burka over time. Just remember that it is all part of respecting his culture and religious beliefs' as described in your letter.

You take good care of Ahmed and remember that we will try to have a
counselor available to help you over any difficulties you encounter while Ahmed is adjusting to American culture.

Thanks again for your concern. We truly appreciate it when folks like you keep us informed of the proper way to do our job and care for our fellow man. Good luck and God bless you.

Rest assured this was never a letter sent out by anyone representing the White House; it is instead one anonymous author's idea of what the administration should be replying to those who criticize the conditions under which Taliban and other terrorist detainees were housed at the U.S. Naval Base at Guantanamo Bay in Cuba. The Guantanamo Bay facility (abbreviated as GTMO, hence its "Gitmo" nickname) has been decried as inhumane by a number of human rights associations and has been denounced at various times in the American press. As we detailed in our article about a Charlie Daniels essay on the situation at Gitmo, the detainees were initially incarcerated at Camp X-Ray, a temporary holding facility near Guantanamo Bay. Inmates were kept in tin-roofed 8x8 cells that resembled dog runs: chain link fencing on a concrete base, open on the sides to the elements. They slept on foam pads placed on concrete floors in cells containing chemical toilets or buckets. At least every two days prisoners would be taken from their cells for all of 15 minutes of exercise. Those being held were later moved to nearby Camp Delta, a permanent detention center erected for this purpose. The 8x6.66 cells had beds and walls and windows, flush toilets and running water, but could still be described as austere.

Some were outraged by the apparent human rights violations found at Gitmo. Others viewed the method of foreign fighters' detainment at that facility as a necessary evil if those being held were to be prevented from inflicting harm on others. Members of yet another faction regarded the matter as one of severe punishment justly earned by foreign fighters not entitled to the protections afforded under the Geneva code to conventional, uniformed prisoners of war.

That divergence of opinion led to members of the first and third groups (and sometimes the second) regarding one another as fool-headed in their assessments and hopelessly out of touch with the core issues at stake. The Internet piece about the fictional LARK program was penned from such a soapbox, its author expressing through the vehicle of humor the opinion that those decrying the condition of the prisoners would quickly change their tune if they were the ones responsible for incarcerating Taliban and al Qaeda detainees.

That line of thought was not original to the unknown author of the Internet piece, as evidenced by a Jim Huber "Politically Correct" cartoon published in January 2002.

This item (which regardless of one's viewpoint is nonetheless a well-crafted use of satire — it is a playfully entertaining read that makes its point in none-too-subtle fashion) has gone through a few revisions as it has been spread its 2002 debut, most notably the change of the signature line from "Cordially, George W. Bush" to "Cordially ... Your Buddy, Don Rumsfeld." This shift reflected a then-current societal perception of U.S. Secretary of Defense Donald Rumsfeld as the one responsible for tough treatment of captured foreign fighters, a view that was somewhat subscribed to in 2002 but which gained far wider acceptance in 2004 thanks to the Abu Ghraib prison scandal in Iraq.

Other textual alterations included the elision of this segment of the 2002 version:

Ahmed's meal requirements are simple, but we strongly suggest serving meals that do not require utensils, particularly knives and forks. Also, these should be "one-handed" foods; Ahmed will not eat with his left hand since he uses it to wipe himself after purging his bowels (which he will do in your yard) — but look on the bright side.. no increase in the toilet paper bill.

He generally bathes quarterly with the change of seasons, assuming that it rains, and he washes his clothes simultaneously. This should help with your water bill. Also, your new friend has a really bad case of body lice that hasn't been completely remedied. Please heed the large orange notice attached to your detainee's cage: "Does not play well with others."

The section on how the fictional prisoner will get along with women in the LARK recipient's household was changed in later versions:

Ahmed will not wish to interact with your wife or daughters (except sexually) since he views females as a subhuman form of property. This is a particularly sensitive subject for him, and he has been known to show violent tendencies around women who fail to comply with the new dress code that Ahmed will recommend as more appropriate attire. I'm sure they will come to enjoy the anonymity offered by the bhurka — over time. Just remind them that it is all part of "respecting his culture and his religious beliefs" — wasn't that how you put it?

Ahmed will not wish to interact with your wife or daughters (except sexually) since he views females as a
subhuman form of property. However, he will be eager to assist with the education of your sons; have available for their use several copies of the Q'uran. Oh — and rest assured he absolutely loves animals, especially cats and dogs. He prefers them roasted, but raw is fine, too, if they aren't more than 2 or 3 days dead.

The closing was also altered:

Thanks again for your letter. We truly appreciate it when folks like you, who know so much, keep us informed of the proper way to do our job. You take good care of Ahmed - and remember...we'll be watching. Good luck!

Thanks again for your letter. We truly appreciate it when folks like you, who know so much, keep us informed of the proper way to do our job. We think this watching over each other's shoulder is such a good way for people to interact that we will be sending a team of federal officials with expertise in your line of work to your place of business soon, just to help you do your job better.

Don't be concerned that they have the power to close your business, seize your property, and arrest you for any violation of the 4,850,206 laws, codes, regulations and rules that apply to your profession. They're really there just to make sure you're doing everything the proper way. That is what you wanted, right?

Well, thank you for this opportunity to interact with such a valued member of the citizenry. You take good care of Ahmed — and remember...we'll be watching.

The later cropping of the original closing paragraphs removed a key element from the piece, that of its writer's indignation over the Gitmo's decriers' insistence that a team of observers not allied with or controlled by the U.S. military be tasked with supervising the conditions under which prisoners are housed at that facility.