Is This the Largest Crocodile Skull Ever Found?

The Purussaurus could grow to nearly 40 feet in length. 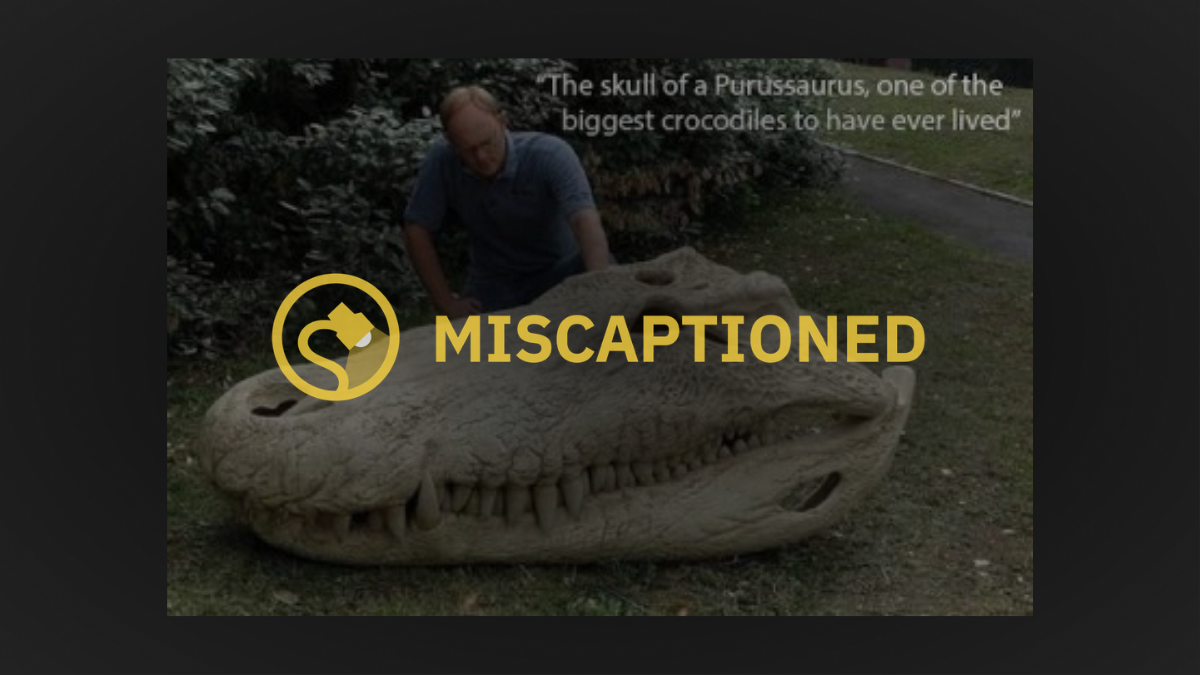 Claim:
A photograph shows the skull of a Purussaurus, an extinct species regarded as the largest crocodile to ever live.
Rating:

Purussaurus was a giant species of caiman that went extinct millions of years ago, but this photograph does not show a genuine fossil. This is a replica model of a skull belonging to a different extinct crocodile species: Deinosuchus.

In April 2021, a photograph started to circulate on social media that supposedly showed a person kneeling next to the skull of the largest crocodile that ever lived: Purussaurus truly was a giant species of caiman that lived circa 8 million years ago, but the above-displayed picture does not feature a Purussaurus fossil. This is actually a model created by the company Crawley Creatures, a model design company from the United Kingdom that makes everything from movie props to museum displays. Furthermore, the skull in this picture was modeled off of a different extinct crocodile species, Deinosuchus, not Purussaurus.

Although it doesn't feature this specific skull, Crawley Creature's 2011 showreel provides a good look at the type of work this company has done:

Jez Gibson-Harris, the creative director of his company Crawley Creatures, told us that the model skull was "sculpted in clay, moulded and a fibre glass cast was made which is what you see." While Gibson-Harris couldn't recall exactly when this model was created, he said that it was likely for "Prehistoric Park" or "Walking with Monsters," two docu-fiction series that were produced in 2005 and 2006.

Deinosuchus, which translates to "terrible crocodile," lived during the late Cretaceous period about 80 million years ago. Adults grew to nearly 36 feet in length and weighed more than 6 tons. The Western Australia Museum writes:

Deinosuchus riograndenis, an extinct giant relative of alligators, was the undisputed top predator in the rivers and estuaries along the east coast of southern Laramidia — a huge island that formed when the rising sea divided North America into several continental islands. From fossil remains it has been estimated to have grown to about 11 metres in length and weigh 6–7 tonnes, by far exceeding any modern alligator or crocodile.

It was twice as heavy as the largest tyrannosaurs of its time and, as bite marks preserved on dinosaur fossil bones suggest, it preyed on dinosaurs. At this time there were also smaller-sized Deinosuchus, which may be a different species, living along the southern and eastern coast of the island called Appalachia. The evidence that this Appalachian population commonly preyed on turtles include bite marks preserved on fossil turtle bones.

Here's a photograph of a genuine Deinosuchus fossil on display at the Natural History Museum of Utah: While the viral picture shows a model, not a fossil, of a Deinosuchus, this picture has been circulating online for years with the claim that it features a Purussaurus skull. The Purussaurus, which could grow to more than 40 feet in length, went extinct during the Late Miocene Period about 8 million years ago. In 2015, a team of researchers in Brazil published a paper that found Purussaurus' bite could exert 11.5 tons of pressure, which is 20 times the strength of a great white shark. The researchers also answered the all-important question of who would win in a fight: a Purussaurus or a Tyrannosaurus?

Aline Ghilardi, one of the co-authors of the study, told BBC Brasil:

"The Purussaurus and the Tyrannosaurus lived in different ages but there is no doubt that the Purussaurus would have won a fight between the two of them,"