Did Kroger Supermarkets Overcharge Customers Due to a Coin Shortage? 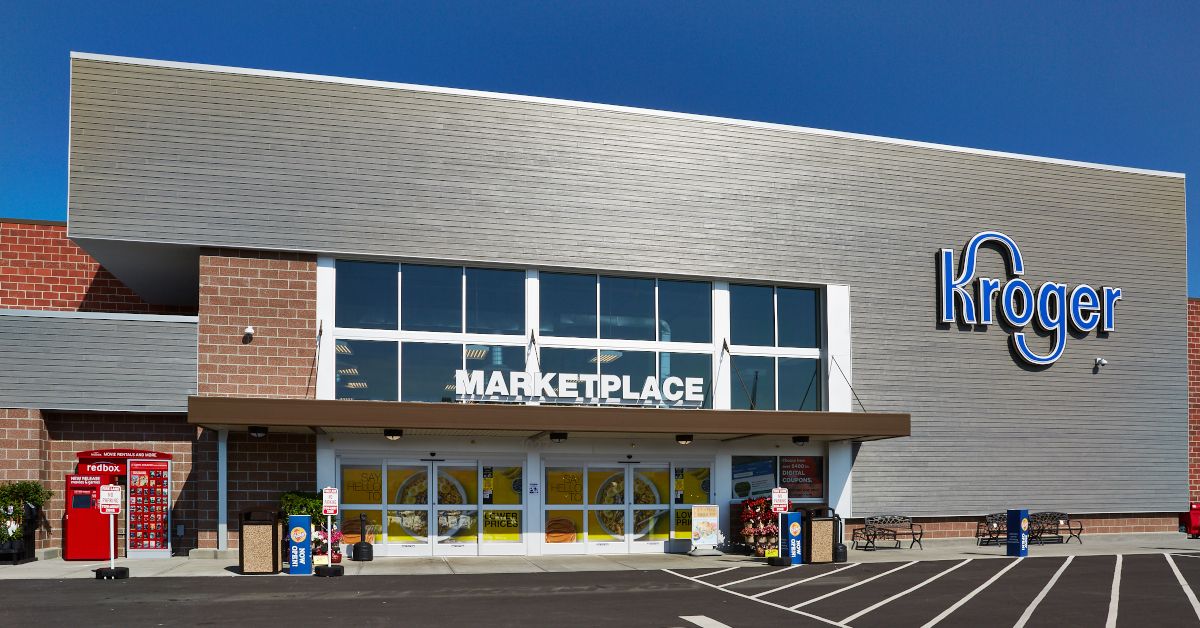 Image Via Courtesy of the Kroger Co.

Claim:
In the summer of 2020, Kroger supermarkets introduced a policy of refusing to give customers cash change, as shown in an incident in Bourbonnais, Illinois.
Rating:

A cashier at a Kroger supermarket in Bourbonnais, Illinois, appears to have insisted that a customer pay $3 for a $2.41 container of milk, without providing cash change. In at least two instances, the company and one of its spokespersons had by that time publicly stated that the company had a policy of no longer providing coin change to customers.

However, Kroger told Snopes that company policy is not to refuse to give out cash change. According to a company statement provided on July 22, cash change is still available at Kroger supermarkets as a matter of policy, but in light of an ongoing nationwide coin shortage, the company's policy is to offer customers the option of having the amount of their change added to their loyalty card, or to round up their payment and donate the remainder to charity.

In the summer of 2020, readers asked us to examine widely shared Facebook posts that claimed the Kroger supermarket chain was refusing to give customers cash change, and thereby overcharging them.

"Kroger will no longer keep coins in the drawer. Starting tomorrow. We will take them, but we can't give change. You can round up to the nearest dollar and donate it to the food bank, or round up and it goes onto your Kroger card as a credit. So it begins ..."

One week later, Facebook users began sharing a post that purported to describe a contentious transaction and conversation at a Kroger supermarket in Bourbonnais, Illinois. The post claimed that, in light of a coin shortage, Kroger was rounding up the price of items to the next dollar, where a customer pays in cash, and then refusing to give out change, thus effectively overcharging customers:

... Stopped by Kroger today for just a gallon of milk.

Seems due to this "Change Shortage", their new policy is to round every cash purchase UP to the next full dollar!

The clerk refused the quarters, explained "due to change shortage" policy & demanded another dollar instead.

So literally the clerk was insisting I pay the $3 or they were refusing the sale. WTF ?!?... A nationwide coin shortage did take place in the summer of 2020, contrary to a prevalent conspiracy theory that falsely claimed the crisis was fabricated or manufactured in order to usher in a cashless economy as part of a broader push towards a "New World Order." That conspiracy theory reared its head in the Kroger post, which included the line, "This is how being FORCED into a Cashless economy begins!"

Remarkably, it is not clear what Kroger's company policy was with regard to providing cash change to customers, at the time the Bourbonnais Facebook post was originally published, in the early hours of July 16.

Initially, a spokesperson for the company provided Snopes a statement which asserted that, in light of the ongoing nationwide coin shortage, Kroger was offering customers the option of receiving the amount of their change in the form of loyalty card credit or rounding up their total and donating the remainder to charity, as well as the existing options of paying by credit or debit card, or paying by cash and getting cash change. The statement read:

"We remain committed to providing our customers with an uplifting shopping experience and the freedom and flexibility to choose their payment method, including cash, during this unprecedented time. The Federal Reserve is experiencing a significant coin shortage across the U.S., resulting from fewer coins being exchanged and spent during the COVID-19 pandemic. Like many retailers and businesses, we are adjusting to the temporary shortage in several ways while still accepting cash.

"Customers can switch their payment type (e.g., use debit or credit vs. cash), and through our upgraded technology, we can now load coin change to their loyalty card for use during the next shopping trip, provide coin change at a lane with coins available or round up their order to support The Kroger Co. Zero Hunger | Zero Waste Foundation, a public charity committed to creating communities free of hunger and waste." [Emphasis is added.]

However, after this fact check was first published, we became aware of contradictory public statements attributed to Kroger earlier in July. In a July 15 article, KABC-TV reported that Kroger had "announced this week that they will not be returning coin change to customers who pay with cash." The article attributed the following statement to the company:

"Currently our stores are collecting donations... by allowing customers to round up their order total to the next dollar... For customers that choose not to donate, our cashiers will load the coin value due back through their loyalty card. Customers can redeem the amount on their next transaction. We know this is an inconvenience for our customers and we appreciate their patience."

That statement made no mention of the continued possibility of customers receiving their coin change as coin change, an omission which naturally indicates that Kroger policy at that time was to not provide customers with coin change.

On July 10, a named company spokesperson appears to have told another news outlet that Kroger policy was to no longer give out coin change. WXIX reported that: "Kroger spokesperson Erin Rofles confirmed Friday the grocer will no longer return coin change to customers. Instead, the remainders from cash transactions will be applied to customers’ loyalty cards and automatically used on their next purchase."

We asked Kroger to explain these glaring discrepancies in the company's various public articulations of its policy on coin change. A spokesperson said that the statement initially provided to Snopes (which asserted that company policy was to give customers the option of receiving coin change) was "first issued on July 13," suggesting the company had been consistent in its messaging on the subject. We found the same wording in a series of tweets the company sent to a customer on July 14. Nevertheless, the company also told KABC-TV the opposite in an article published the following day.

In one particularly egregious example of the confusion surrounding Kroger's articulation of its policy, on July 14 the company actually posted two different sets of tweets in response to the same customer's inquiries on Twitter. In one pair of tweets, Kroger told @bbaum17 that customers could either have their change loaded on to their loyalty card or donated to charity (no mention of coin change). In a second pair of tweets, Kroger told @bbaum17 that the company could accept a credit or debit card as payment, or load the customer's change on to their loyalty card, or have it donated to charity, or they could "provide coin change at a lane with coins available."

The company spokesperson suggested to Snopes that news articles reporting that Kroger was no longer giving out coin change might have been based on signs that have been erected inside Kroger supermarkets. The spokesperson provided the following example, which reads:

We apologize for any inconvenience this may
cause and appreciate your help. A sign that apologizes to customers for the inconvenience associated with an ongoing nationwide coin shortage, suggests three ways to avoid the need to provide change, and omits to mention that customers can still get their change in coin form is very obviously likely to create the perception that Kroger no longer gives out coin change.

We asked Kroger for exact details on whether, when and how its policy on coin change had changed; as well as whether, when, and how those changes had been communicated to Kroger's regional divisions, in-store employees, and paying customers. We will update this fact check if we receive a response to those questions.

In its initial statement to Snopes, Kroger gave us the clear impression that its policy on coin change was unambiguous, made no mention of any existing confusion or misinformation over that policy, and made no mention whatsoever that the company and its spokespersons had previously made directly contradictory public statements about that policy.

In reality, Kroger and its spokespersons had indeed issued contradictory and confusing public statements, and had done so before the original "Bourbonnais" Facebook post was published in the early hours of July 16. As a result, we are changing the rating in this fact check from "Mostly False" to "Mixture."

It's not entirely clear what took place at the Kroger supermarket in Bourbonnais, Illinois, specifically, but it appears to have been at least similar to the description in the widely shared Facebook post. A spokesperson for the company told Snopes:

"The associate who engaged with this customer was newly trained to the cashier role and misunderstood the various ways we’re adapting to the temporary national coin shortage. It is an isolated event, and we’ve since coached the associate and contacted the customer."

This appears to be a tacit admission by the company that, in the specific instance highlighted in the Facebook post, the cashier did incorrectly insist on receiving $3 in cash for the milk, but that this was not in keeping with the company's policy, although as we outlined above, the company's public articulation of its policy on coin change has not been consistent.

Shortly after midnight on July 16, a person who lives near Bourbonnais, whose name we are withholding because their original Facebook post was private, published what appears to be the original version of the subsequently widely shared post. (That original version of the post began "Stopped by Kroger today" while versions published later began "Stopped by Kroger yesterday," and the edit history of the post shows that a photograph of the receipt that showed the name of the cashier was replaced with a photograph showing the cashier's name obscured -- both signs that the post was published by the customer in question).

We contacted that person, whose identity we verified. In an email to Snopes, that person reiterated the version of events presented in the original Facebook post. The customer clarified that it was not possible to purchase the milk with a debit or credit card because the patron lives on "a cash basis."

To complicate matters further, on July 22 a Facebook page with the name "KROGER-Bourbonnais" published responses to the viral post, explaining that the company was "currently allocating the remaining change that you would typically receive after your purchase to your Kroger Loyalty Card," but later wrote that "we are not rounding up ... it was just a mistake of [sic] a cashier."

Those posts were not written by an authentic Kroger company account, a spokesperson told Snopes, adding "Our social media team isn’t affiliated with it."