Is Kristen Bell the Most-Tattooed Actress?

Rumor holds that Kristen Bell is the most-tattooed actress in Hollywood, with more than 200 facial and body tattoos. 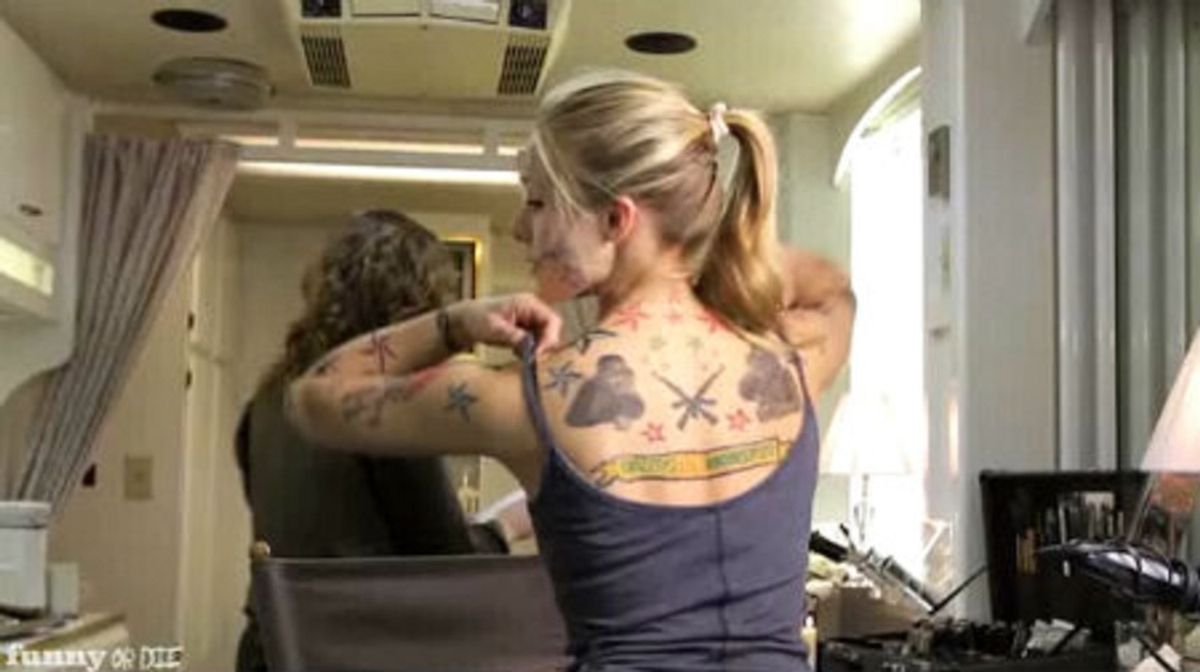 Image Via Funny or Die screenshot

Claim:
Kristen Bell is the most tattooed actress in Hollywood, with more than 200 facial and body tattoos.
Rating:

Despite her wholesome appearance, Kristen Bell is rumored to be one of the most tattooed actresses working in Hollywood. Several photos purportedly showing the inked-up thespian have been circulating on the Internet since 2012, frequently accompanied by a quote from Bell discussing how long it supposedly takes her to get ready before a shoot:

A lot of people don't know this about me. It's a little secret from the Hollywood sandbox. It's safe to say that it takes a little bit longer for me to get ready than other actors. Let's just say that I've accrued a lot of ink over the years. I have 214 professional tattoos and nine I've done myself. However, the photographs showing Kristen Bell covered in tattoos were taken from a sketch for the Funny or Die comedy website which was released on Jan. 6, 2012, and while the humorous nature of the skit may seem obvious, several people have been fooled by subsequent tongue-in-cheek articles that have declared Kristen Bell to be the most tattooed actress in Hollywood. Other viewers may have been deceived after viewing one of the above-displayed photos of Kristen Bell outside of any explanatory context:

Kristen Bell has undertaken several other videos for Funny or Die, so let's clear up a few potential misconceptions in advance: The actress has not started a fundraiser for McLovin', she did not star in David Mamet's non-existent "Lost Masterpieces of Pornography," and she did not fight Sigourney Weaver on the set of You Again.